The Legend of Charlemagne, a story of love 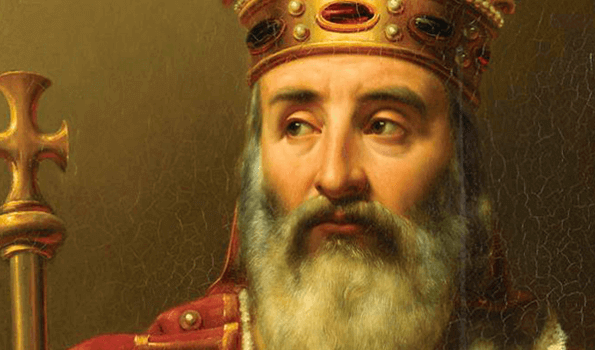 The Legend of Charlemagne is one of the most clever and interesting stories by Italo Calvino. This wonderful writer born in Cuba, to Italian parents, left an impressive testimony of his sharp sensitivity and clear intelligence in this short story.

Calvino always struggled between a radical realism and an imagination without limits. The legend of Charlemagne is a good example of this. Starting from a fantastic and almost unlikely story, he manages to capture a deep and analytical vision of passionate love.

Many of Calvino’s works have the tone of a fairy tale. The Legend of Charlemagne could be categorized within that group. However, in this case, its purpose goes far beyond a moral. This story makes an impressive revelation about romantic love. Italo Calvino’s position on this subject is very close to that of contemporary psychoanalysis.

“Either you love the person who protects…or you love a narcissistic image of yourself.”.

The Legend of Charlemagne and love as passion

The Legend of Charlemagne begins like this, “Late in life the emperor Charlemagne fell in love with a German girl. The barons at his court were extremely worried when they saw that the sovereign, wholly taken up with his amorous passion and unmindful of his regal dignity, was neglecting the affairs of state.”

It is interesting that Italo Calvino took as a central character an older and powerful man. Apparently, it is the antithesis of that adolescent posture in which love overpowers everything. No matter who the emperor was, falling in love closed his eyes to everything else.

Power and love are not two compatible realities, although sometimes they go hand in hand. In this case, love prevails over power, an issue that puts the entire empire at risk. This is just the beginning of the amazing events that occur next.

Love, a deception, a spell

After having fallen in love so intensely, the unthinkable happened. His beloved died suddenly. Charlemagne’s legend says that his love did not die with her. The emperor, blind with pain, had the embalmed corpse brought to his own room. He did not want to separate from the inert body even for one moment.

The story continues, “The Archbishop Turpin, alarmed by this macabre passion, suspected an enchantment and insisted on examining the corpse. Hidden under the girl’s dead tongue he found a ring with a precious stone set in it.”

It was discovered then that what was hidden under the love was a spell. In the end, Charlemagne was not exactly in love with the young German. What had happened to him was the work of magic, not of a real feeling.

Italo Calvino begins to reveal here the true nature of love. There is something that the beloved has, but it is not them themselves. The lover falls in love with what the other bears, not the other. In terms of psychology, we would say that love is the activation of a magical element. Not in the poetic sense, but literally. When you love, you give up the rules of logic and begin to caress the impossible.

Love – a ring with a precious stone

The end of the legend of Charlemagne could not be more surprising and overwhelming. This is what happened after the Archbishop found the ring, “As soon as the ring was in Turpin’s hands, Charlemagne fell passionately in love with the archbishop and hurriedly had the girl buried. In order to escape the embarrassing situation, Turpin flung the ring into Lake Constance. Charlemagne thereupon fell in love with the lake and would not leave its shores.”

In this final part, the nature of that unreasonable, passionate love was revealed. In the end, Charlemagne did not care what the object of his love was. That’s why he fell in love with the archbishop and then with a lake, which he loved forever. The secret of everything was in that magic ring.

The ring is a figure with a border, but nothing in the center. It is a circle that defines the void. But it has a precious stone, something that shines, that attracts, that dazzles. In the end, that’s the way love is, or at least some characterize it that way. An attempt to define the void defines nothing. Despite this, it actually exists in people and comes to determine their lives. Passionate love is born, grows and dies in the imagination.

9 Interesting Side Effects of Falling in Love
Paulo Coelho said “There is no such thing as peaceful love. It is accompanied by agony, ecstasy, intense joy and deep sorrow."  Read more »
Link copied!
Interesting Articles
Psychology
People Who Give Their Opinion Like It's a "Universal Truth"

Some people just love giving their unsolicited opinions. People who are going to "help" everyone by telling them what they supposedly…

Wellness
How to Know If You're in an Overly Demanding Relationship

Influential journalist Walter Winchell said: "Never above you. Never below you. Always beside you". Although that seems logical, it's not…

Emotions
Life Is Measured In Emotions, Not Hours

Life is measured in emotions, those moments in which intense psychophysiological reactions bring glimmers of true meaning to our existence.…

Maybe William Shakespeare was right when he said that "in friendship, as in love, we are often happier through our ignorance than…

Psychology
The Secrets to Maintaining a Liberating Dialogue

Knowing how to express oneself, and knowing how to speak and understand is a true art form. There are many secrets to…