Are Love and Infatuation Two Sides of the Same Coin? 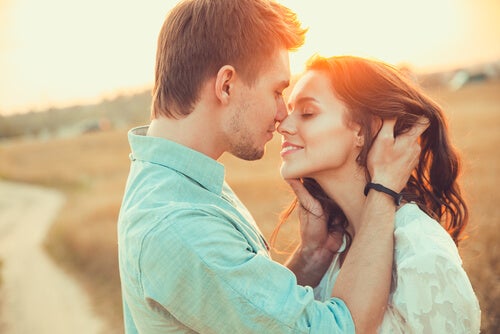 “It’s one thing to fall in love. It’s another to feel someone else fall in love with you, and to feel a responsibility toward that love.” David Levithan wrote that in his book, Everyday. Could he have meant there is a difference between love and infatuation? Maybe.

And the thing is, a lot of people think love and infatuation are the same. But the truth is that a lot of experts think that’s incorrect. There are important differences that we’ll look into now.

“Love is a game that two can play and both win.”
-Eva Gabor-

Differences Between Love and Infatuation

One of the classic differences between love and infatuation comes up when we think about the “romantic” sense. Here’s a question to explain it better. Do you love your siblings, parents, friends, pets…? You know you’re not infatuated with them, right?

Because infatuation, in neurochemical terms, creates an enormous desire, a huge obsession. We might even call it an addiction. Our attention centers around the person we love.

Now the solitary activities we used to enjoy seem small compared to anything that might mean time with them.

Chemistry also has a lot to say about infatuation. While we’re under its “spell,” powerful neurotransmitters like serotonin and dopamine enter our brain. The neurochemical effect of infatuation on our brain isn’t so different than certain drugs.

We might feel like that’s bursting the mysterious, magical bubble of infatuation, with scientific talk, but it’s the truth. These neurotransmitters are the ones that make us perceive our emotions so intensely.

We idealize our partner. They fill us up with energy and make us live in a kind of bubble. If you can make it last forever, that would be wonderful, wouldn’t it?

As we suggested at the beginning, we can love a lot of people, but infatuation tends to center around one person. It’s like everything boils down to just them.

All it takes is for the other person to hint at something they want for us to immediately try to figure out how to make it happen. If we find a way, we usually underestimate the costs — whether time, money, other relationships, etc — it would mean for us.

Actually, in many cases infatuation is the starting point for love. Through it, people get to the point where they start to bond. They’re bonds that will be part of what keeps the couple together in crisis.

Of course you do, but not all equally or under the same conditions. As you can see, we’ve already seen some differences between love and infatuation.

This point comes directly related to the two before. That is, love is rational, or at least it’s less irrational than infatuation. We don’t feel the same emotional intensity towards a friend or a sibling as we do for the person we’re infatuated with.

Because infatuation means a huge increase in the chemical neurotransmitters that give emotions increased intensity. But, little by little it will disappear, making way for a calmer, more rational love. At least in the majority of cases (there are always exceptions).

“Love is something eternal; the aspect may change, but not the essence.”
-Vincent van Gogh-

Time Moves for Everyone

At the beginning of a relationship, expectations are high. There’s an intense attraction and a lot of suspense over what might happen. But time moves on. And with it comes security, stability, affection, shared ways of communicating…

We Come Down From the Cloud

While we’re fully in the process of infatuation, we’re living in a cloud. It’s like it’s lifting us to the sky, because the person we love is there. We even lose sleep over this picture of perfection.

But it doesn’t matter how high the cloud takes us towards that person’s pedestal. There’s always a time when we have to come down, touch the ground, and stop flying blindly.

That’s where love makes an appearance (for some people it even transforms). And then the person shows their defects, but also their intimacy, their understanding, and their care.

Couples that have just gotten to know each other tend to have an enviable harmony. Empathy is easier because one is very attentive to the other, and vice versa.

But, knowledge and mutual understanding are a slow simmering pot, just like trust. In fact, we’ll never stop discovering the other person. That’s partly because they’re dynamic and they change. Even if they change their habits, their social circle, or their personality.

But we distinguish a solid nucleus in them. We see a kind of stability in how they are that makes us feel like we know them.

We know their expressions, the face they make that tell us they liked or didn’t like something. Other people wouldn’t notice, even if they paid more attention, but we wouldn’t miss it.

Then when the infatuation ends, sometimes desire simmers down and weaknesses emerge. But once we get through the transition, we’ll strengthen other parts.

We’ve already talked about trust, mutual understanding, and intimacy. But if there’s one good sign of continued love, it is that mutual admiration remains steady.

The differences we’ve explained between love and infatuation are just an outline. As always, the real life is much more interesting.

There are people who say they’re infatuated with a friend. There are others who start by loving their partner and become infatuated later, or never do so. And there are couples that claim they spent their whole lives infatuated.

Regardless of the differences between love and infatuation, the important thing is for every relationship we have to be a positive adventure.

Long-lasting Love Begins when the Infatuation Phase Ends
The key to understanding long-lasting love is in looking at it as a transition. Read more »
Link copied!
Interesting Articles
Psychology
Do Good for Others, and You Will Find Happiness

The boomerang effect or "Action Theory" tells us that "every cause has its effect and every effect has its cause".…

The scene never stops being repeated and imitated, and not because it’s particularly archetypal.  There is always a couch, a…

The semiotic function is the ability to create representations. It's based on the use of signs and symbols that have…