A Butterfly that Thought It Was Still a Caterpillar: A Transformation Story 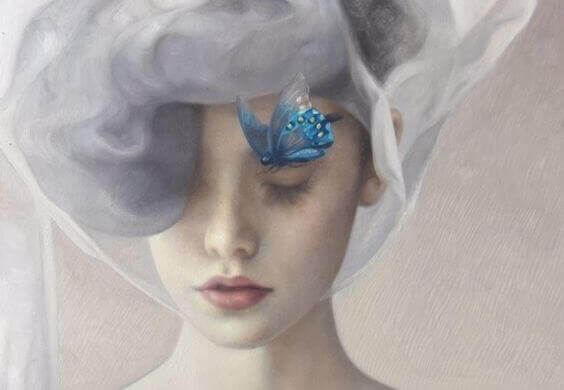 This transformation story tells the tale of a butterfly that believed it was still a caterpillar. It speaks of transformation and not accepting it. The truth is, sometimes we have more power than we’re willing to see, and we waste energy resisting change, with our eyes fixed on the past, trying to be who we no longer are.

Some time ago, a small caterpillar was born. With some difficulty it crawled on the ground from one place to another. Until one day, tired of crawling, it decided to climb a tree. But not just any tree, it chose to climb a tree with a large trunk and dewy leaves. A tree it had played under for years.

The caterpillar climbed and climbed, but then it slipped, fell and could not move forward. But it kept working and step by step, little by little it managed to climb.

It came to a branch it could see the whole valley from. The views were wonderful. It could see other animals, the blue sky with white cotton clouds and, on the horizon, a great sea painted an intense blue. From that branch the caterpillar breathed in peace.

It sat there, observing the world around it, and felt that life was too beautiful to not transform with it. While the caterpillar was tired and, at the same time, grateful for its life as a caterpillar, it knew that the time had come to become something else.

“The greatest gift you have to give is that of your own self-transformation”.
-Lao Tzu-

A tale of transformation from caterpillar to butterfly

The caterpillar fell asleep, feeling a great peace and thinking about how its destiny was to be something more than a simple caterpillar. It slept and slept, making a chrysalis grow around it, a shell that kept the peace there long enough to become another being.

When it awoke it felt trapped in a heavy shell that didn’t allow it to move. It felt something strange had grown on its back. With effort, it moved what looked like huge blue wings and the shell broke.

The blue butterfly crawled down the tree using its little legs, even though it now had wings. It carried the weight of those big blue wings, a weight that consumed its strength.

The blue butterfly moved using its legs as it had always done, believing itself to be a caterpillar and continuing to live as if it were. But its wings didn’t allow him to move on the ground with as much agility as before.

“What the caterpillar calls the end, the rest of the world calls a butterfly”.
-Lao Tzu-

The weight of the wings

The butterfly that believed itself to still be a caterpillar didn’t understand why its life had become so hard. Tired of carrying the weight of its wings, it decided to return to the branch where it had transformed. This time, trying to climb the tree, moving forward was impossible.

A gust of wind or any other small unexpected occurrence pushed it backward. The butterfly that thought it was still a caterpillar stood still and looked up at that branch that seemed so far away. Then it began to cry, desperate.

The blue butterfly that thought it was still a caterpillar looked strangely at the white butterfly and then looked at itself and its large, heavy wings. Just as on the day that it came out of his shell, it moved them hard and opened them.

They were so big and beautiful, a color of blue so intense that the transformed caterpillar got scared and quickly closed them again.

“You’re wearing down your legs by not using your wings,”  said the white butterfly, taking flight while opening its wise wings and flying away with elegance.

The blue butterfly opened them again, and this time kept them open. It closed its eyes and felt the wind caressing them. It felt that those wings were now part of it and accepted that it was no longer a caterpillar, so it could not continue to live as such, crawling on the ground.

Then it opened its wings wider and wider, each time becoming more butterfly and less caterpillar. It observed the beautiful, almost magical blue of its wings. Soon it realized it was flying, it was slowly moving towards the branch.

Flying was much easier than dragging its legs, although it still had to perfect its technique. It discovered that its fear of flying hadn’t allowed it to accept who he really was, a caterpillar transformed into a blue butterfly.

This tale of transformation is the story of a butterfly that thought it was still a caterpillar. It’s the story of the beautiful blue butterfly, with strong wings, able to fly against the current, in the middle of storms and powerful winds.

The blue butterfly had big, beautiful, blue wings. A blue of many different shades, from the color of the lightest sky to the angriest sea. But it didn’t even know.

The lesson of the tale of the blue butterfly’s transformation

This tale of transformation reminds us that we live in a changing, dynamic world of constant evolution and that we’re a part of it. But sometimes, although we have transformed and have the strength to change, we don’t accept it for whatever reason: maybe fear, shame, guilt …

“It is impossible to always be the same person because we live”.
-Eloy Moreno-

Here, a beautiful, strong, blue butterfly doesn’t accept that it’s no longer a caterpillar, and therefore can’t live as if it were. One part of it wanted to change, but another part feared change and tried to cling to its past and keep living like before it had changed.

It took some time to accept and discover what its wings were for and how it could live from then on. For this, it needed some help. Sometimes others see our strengths more clearly than we do by ourselves.

Do you have a challenge and want to overcome it? Well fight with all your strength and you'll get a…

Psychology
When They Had Already Dismissed Her, She Did Something Magical…

You have probably heard on more than one occasion how important it is to make a good first impression. That…

Psychology
Being Afraid to Make a Decision: How Does It Affect You?

There aren't many fears as common as this one: being afraid to make a decision. We really should be experts…