The Gesell Chamber: How Is it Used in Psychology?

The Gesell chamber is an instrument used in different areas of psychology, reducing the observer's influence on the development of the observed situation to a minumum. In this article, we'll tell you why it's so useful. 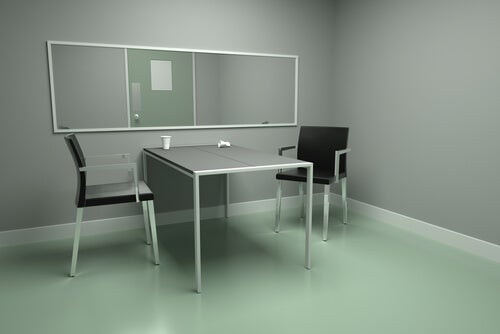 Every area of science needs methods and instruments in order for it to advance. In addition to this, they need them to increase learning, promote research, and put their theories into practice. Psychology is no exception. Perhaps in this science, the tests are the most recognizable instruments. However, there are instruments too, and the Gesell chamber is one of them.

Some of you may not know what we’re talking about, although you may have seen it on occasions without knowing what it was. Think for a moment about those films where they’ve interrogated a criminal. Well, these are rooms that are adapted to observe people in two environments separated by glass that’s opaque on one of its sides (In other words, they’re effectively one-way screens).

In addition, you’ll often find them equipped with a sound and video system for recording. But what are they used for in psychology, what areas of psychology are they used for, and do they have limitations? We’ll answer these questions throughout this article.

The Gesell chamber: its use in psychology

The Gesell chamber was a creation of Arnold Gesell, an American psychologist and pediatrician who didn’t want the presence of an observer to influence children’s behavior in their research. His chamber makes it possible to see other people’s behavior through the glass. This makes it easier in:

You can observe both real cases and simulations with this method. However, this will depend on the purpose of the activity. In any case, the Gesell Chamber is an instrument that allows psychologists to investigate and observe a person’s behavioral, cognitive, and emotional world without the influence of a spectator influencing what’s observed.

Moreover, thanks to the audio and video system, you can easily record the sessions. This is useful for learning and research. This way, you can pick up on things you might otherwise have overlooked.

In what areas do psychologists use it?

The use of the Gesell chamber will depend on the area you apply it in. Let’s see some common areas:

In addition, it’s a very valuable instrument for psychotherapeutic supervision. By using the Gesell chamber, the psychologist can be with their patient while a group of professionals evaluates what goes on. This way, they get an orientation or evaluation of how the session or process went.

The limitations of the Gesell chamber

While it’s an instrument that brings great benefits, it also has its limitations. Let’s look at them:

Research backs up its use

However, these limitations don’t mean that this isn’t a valuable tool for psychology. In fact, there’s research that demonstrates its usefulness. For example, in the article “Utility of the Gesell Chamber in the development of the Psychologist’s professional competences in Machala Technical University”.

In this article, they show how theoretical knowledge and practical work can be integrated through the use of the Gesell Chamber. This is useful for a psychologist in training, in order to help them acquire competencies that will be useful in their professional work.

In the article written by Honduran lawyer Gina María Sierra Zelay entitled “The Gesell Chamber as an investigative tool in child sexual abuse”, we can see the importance of this instrument, especially in the case of people who’ve suffered abuse. By using this method, it means they aren’t exposed to the defendants and suspects. If they were, then it could alter their testimony, besides causing emotional instability.

In short, the Gesell chamber is a wonderful instrument for both training and investigation. Depending on its use, its virtues vary. In psychology, it facilitates the exploration of the patient or subject to be evaluated, as well as the follow-up, supervision, and learning.

Cesare Lombroso and His Theory of Criminology
Today, we're going to tell you about the man some people see as the father of criminology, Cesare Lombroso. Learn about his theories here! Read more »
Link copied!
Interesting Articles
Clinical Psychology
Stress Can Change Your Personality