This Short Will Teach You The Charm Of Being Different 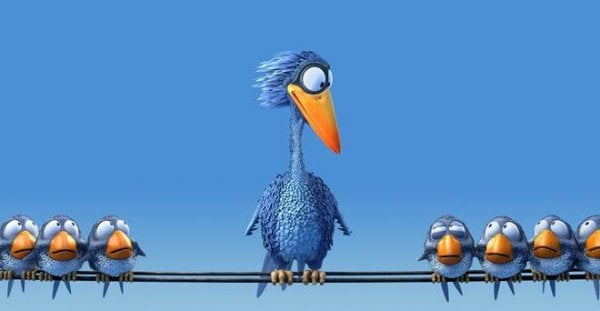 “For the Birds” is a sublime short film. Just a few minutes of fun charm where you will meet a set of fifteen annoying, irritating little birds, that will make you smile, and will make you smile even more when they encounter a somewhat quirky bird.

If you have children at home do not hesitate to take some time with them and enjoy this 2000 production by Pixar. It is directed by Ralph Eggleston, a well-known name within the animation industry who has worked on familiar films such as “Up,” “Toy Story,””Wall-E,”and “Finding Nemo.”

“For the Birds” is a metaphor for life itself. We are dealing with a community of birds inhabiting a power line, but it could also be a neighboring community or a school classroom where being different is the focus of ridicule and criticism.

Our protagonist is a somewhat strange bird. He has long legs, a long neck and his voice sounds different from that of the fifteen small birds. Our bird is of another race and is searching for, like any other, a place to fit in wherever his wings will take him…

However, and as we all know, being different, is sometimes quite a problem. The strange, lanky bird manages it the best he can.

The art of being different and the effort to be similar

In the opening scene, a bunch of similar birdies are chirping to one another, making a racket and moving proudly along a stage that they control in an almost military fashion. They are like those teenagers who insist on dressing alike, or those office mates that form tight groups at work.

In life we ​​find ourselves in many situations that are similar to the one represented in this short. The arrival of an “outsider” revolutionizes the community of that class of high school students, that block that neighbors or that town.

Our fifteen bluebirds are alarmed by the arrival of that big, quirky bird. Far from integrating him, far from responding to his friendly greeting, these little conspiratorial blue jays with menacing eyes initiate a deafening squeak.

But we all know that sometimes it is better that we are criticized for being different than to become like the others, like those that at one time rejected or disregarded us.

Being different is often seen as a threat because it means we question the typical way of life, which usually offers us some sense of control and gives us security.

Being different is not a problem, actually the problem is with others for refusing to accept other perspectives, and for refusing to enrich themselves with something that is not similar to them.

Being different gives us the opportunity to enjoy being authentic and unique. Something that not many people can take pride in.

The best part of “For the Birds” is the attitude of our protagonist. The way the strange, zany bird faces this group of rowdy birds who look at his presence on the power line with much suspicion.

His smile is not lost at any point; it is his cover letter, his strength and his charm. That friendly smile at some moments becomes curious and also pious, because when facing a group of negative and unfriendly creatures, the only force that definitely works is goodness and kindness.

He does not give up. He does not mind that none of these birds return the greeting. He doesn’t care that they don’t make room for him on the cable. Our protagonist persists and resists, and rather than creeping in slowly to break the ice, he decides to make himself comfortable right in between all of them.

This daring act arouses a whole host of criticisms, whispers, annoying and adorable gestures that evoke a thousand smiles and hysterical laughter. The outcome is one of the most epic films produced by Pixar, and it was granted an Oscar for best animated short film in 2001, along with an Annie Award and a mention at the Sitges Festival.

Sometimes our efforts to be everything and equal and similar, can leave us in the nudity of our own shortcomings. Something that does not happen with authentic people where being different is being special. “For the Birds” is a metaphor for exactly this.