Men, like women, are sensitive. Thus, male sensibility is quite normal. Thanks to it, they can accept new perspectives and establish new connections with themselves, others, and nature. 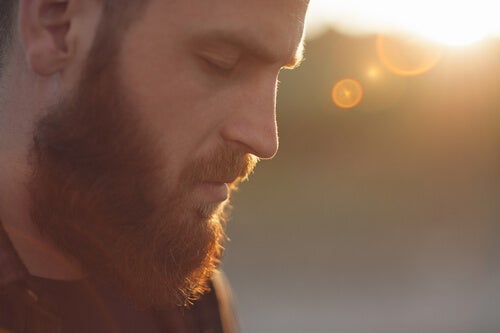 The world is full of myths related to sensitive men. This is why it’s a topic of great interest to many people, a topic we’re now seeing from a different perspective.

Now, before we continue, we’d like to clarify that we don’t intend to get into a debate on cultural relativism, especially regarding what the most accepted stereotypes in every culture are. What we intend to do is highlight the current transformation of masculinity regarding its social construct.

In recent years, masculinity has become progressively associated with sensitivity in some ways. This is a departure from many myths held by some Western cultures. After all, sensitivity is characteristic of all living beings. Thus, when a man doesn’t recognize and accept it as his own, he doesn’t fully own his masculinity.

In this article, we talk about male sensibility and go beyond the myths and misconceptions in order to find a new perspective on the description of masculinity. At the same time, we’ll review some common beliefs.

What are sensitive men?

The Oxford Dictionary defines sensitivity as “the ability to understand people’s feelings”. But what are sensitive men?

The answer to this question is the same as the definition above. Everyone has the capacity for empathy and we all understand people’s feelings. However, men were deprived of this faculty in the context of certain beliefs in many cultures. According to them, masculinity and strength don’t mix with the world of sensitivity and emotions.

Because of this, men have had the role of protectors throughout history due to their own force and regardless of the environment in which they grew up. For example, in various cultures, men also get credit for an identity in which sexuality and money play a fundamental role as symbols of power. Thus, a man who shows his feelings is considered weak.

The novelty is that there’s an important change in some cultures in this regard. More and more men are coming to terms with their own sensibility and allowing themselves to be emotional and affectionate. This is only possible when they can embrace their sensitivity and transform any feelings of insecurity they might have into empowerment.

Of course, sensitivity is as old as dirt. It’s an innate aspect of any being, regardless of their gender or species. We feel to protect ourselves, to survive. The problem started when sensitivity was ascribed only to women in various cultural contexts.

Some phrases that become mandates when used in children’s upbringing. These phrases definitely shaped our identity. They obviously led to existential problems because they’re not true. Thus, they’re either half-truths or based on erroneous grounds.

For example, expressions such as “Men don’t cry”, “Dolls are for girls”, “You cry like a woman”, “Women aren’t attracted to good men, they prefer bad boys”, or “Men don’t change diapers” are all examples of such myths. These phrases encourage men to stray from their emotional side.

In this regard, cognitive psychology showed us that beliefs are passed down from generation to generation. In contrast, psychoanalysis helps us understand that this mystification happens through unconscious mechanisms.

Thus, it’s important to understand that every man has the freedom to choose their own path. And that, of course, he can claim more space to delve into his emotional universe. Thus, it would be possible to morph from macho-man to sensitive man, a new man capable of establishing deeper connections with himself, with others, and with nature.

Thus, it’s important to foster the notion that a sensitive man isn’t less of a man. Simply, instead of following culturally established virility guidelines, men can be flexible with their emotional sphere. Therefore, they can enjoy what sensitivity has to offer.

The characteristics of sensitive men

While it’s difficult to part from social, cultural, and family mandates, the truth is that men are sensitive as well. In fact, today’s men have taken a step further to exercise their affectionate side.

Now, it’s worth noting that these manhood mandates aren’t always imposed on men by other men. Women are also responsible for propagating these stereotypes. For this reason, both genders must work together to bring down the barriers that deny an emotional world to men. They must actively participate in changing them.

The benefits of male sensitivity

Accepting sensitivity as part of your manhood is beneficial in many ways:

However, it’s important to mention that although male sensitivity is accepted nowadays, it still isn’t easy for many men to show their sensitive side.

According to author Walter Riso, some men can’t cry because they’re afraid of being labeled “gay”. They live in pain because they can’t ask for help mainly because they still believe in the myth that men should be self-sufficient.

Therefore, in order to get in touch with your male sensibility, one of the first steps you must take is put aside your self-demands. This way, you’ll be able to modify any negative phrases and myths that you believe to be true.

Male sensitivity exists. Although being in touch with the emotional world is a difficult task for any man, if you succeed, you’ll build new connections from another perspective.

Machismo doesn’t always Benefit Men
Machismo - the belief that men are superior to women- is an ideology that harms both men and women. We examine the effects here. Read more »
Link copied!
Interesting Articles
Social Psychology
Psychosocial Support after Disasters

Dehumanizing consists of negating that other people have human traits. In other words, to dehumanize is to consider someone "less…