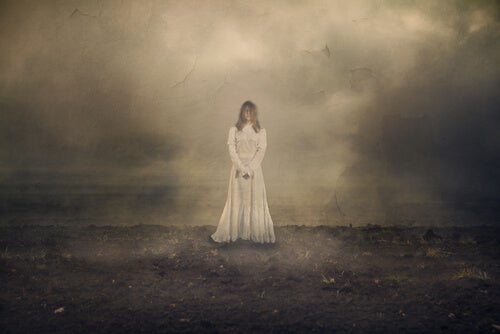 Where does man’s pleasure of fear come from? If we look at the words of the famous researcher and psychologist Arthur Westermayr, “from the beginning of human thought, fear has been regarded with contempt.” If this statement is true, why do so many people like it?

Perhaps there is no genuine and completely certain answer. However, we will try to locate the root of this singular emotion. Let’s go!

The pleasure of controlled fear

We begin by referring to the testimony of sociologist Margee Kerr, who also works permanently in an attraction called the House of Terror, in Pittsburgh, United States. For her, the key is in control.

What control does Kerr refer to? The answer is simple. Whenever the the human brain experiences fear in an environment that is free of danger, the physiological reaction can be really fun, hence the pleasure felt in such situations.

“A nothing in life is to be feared. It should only be understood”

In this statement, Kerr adds that the fact of overcoming a situation that has led to high stress for our brain leaves a residue of self-confidence and a positively enviable feeling. A cocktail that allows our brain enjoy a priori facts that should be negative.

What is fear really?

Do we know what fear actually is? It’s commonly explained as a series of emotions related to a psychological process that indicates possible dangers, stress or singularly negative situations.

They are actually a number of systems that are activated physiologically and behaviorally in threatening situations. It all happens very quickly. After a first glance, our brain is already aware of the kind of fear that has been aroused in us.

Obviously, if our brain interprets the kind of fear that we face as a controlled situation, it can be enjoyable. That is, a horror film, a carnival, a celebration of Halloween…

Now if our brain senses a fear unrelated to a controlled situation, such as the possible death of a loved one, a mugging, etc., be sure that there will be no enjoyment and the real and uncontrolled terror of mind and body is powerful.

Condition to be scared

Can a person be conditioned to suffer from terror? If we consider the experiment “Conditioned Emotional Reactions” in 1920 held by Rosalie Rayner and John Watson, we can conclude that it can.

In the above experiment, the researchers created a phobia in a boy of about nine months of age. In fact, the study described step by step the whole process by which they conditioned fear. Today, this experiment would be viewed as unethical but it does shed light on this phenomenon.

It suggests our brains can be perfectly conditioned to experience fear . This fear, again, when experienced within a framework of control is extremely rewarding for many people.

The positive or negative reactions to fear can be understood from the psychological reactions that occur in our brain. According to the stimuli received, we will be able to interpret and understand this emotion.

Within our limbic system, in the depth of our temporal lobe, we find the amygdala. This subcortical structure is responsible for defining whether it is a “pleasure-fear” or a “real-fear”.

In a situation in which this emotion occurs, we can react in different ways. We may want to run, attack, escape… at any rate, our bodies react by releasing adrenaline and raising the level of cortisol and blood sugar.

Is this huge change in our body normal? In fact, if you are in a controlled environment and your mind knows for sure that there is no danger it will be a great pleasure for the whole body. You will enjoy  without interference from any real threat.

“Fear is that little darkroom where negatives are revealed”

So now you know. If everything is under control, the pleasure of fear can be a tool to improve your mood. One way to give your brain an impulse that gives it a feast of substances that it loves without harm.

People who have honor of being considered the most intelligent in the world, have several problems to worry about, like… More »

Link copied!
Interesting Articles
Neuroscience
The Importance of an Emotional Salary at Work

If you want an employee to perform well, it's important to provide them a fair salary and bonuses or other…

Although not many people know about this new eating disorder, it's on the rise. Drunkorexia is a very serious eating…

Psychology
What Excuses Do you Make to Avoid the Psychologist?

I don't need to go to a psychologist, I'm not crazy." How many times heard that phrase? Maybe you heard it…

Dorian Gray syndrome is a set of symptoms quite telling of modern times. It consists of a resistance towards aging and an extreme fear that one's body will get deformed…