Oxytocin, the Love and Happiness Hormone 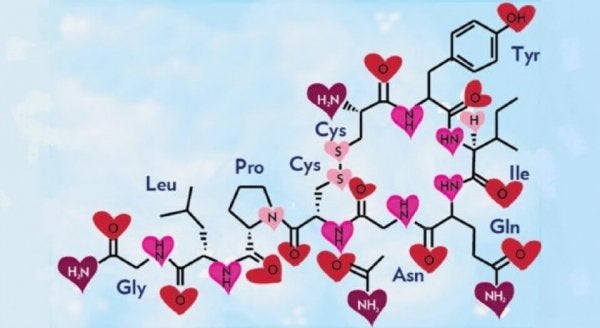 Oxytocin is a hormone with several different jobs. We still don’t know exactly what a lot of them are. We do know, for example, that it is oxytocin that connects us with other people.
It’s what injects us with a certain force that plays a role in affection, reproduction, lactation, and love in all its shapes and colors. It’s what induces childbirth and shapes life with a capital L.

In today’s world, when we talk about oxytocin there are a lot of people who almost immediately associate it with the other oxytocin. The synthetic one that induces labor.

Oxytocin is produced in our hypothalamus and is secreted from our pituitary gland.

Studies on this tiny organic molecule, both hormone and neurotransmitter, keep on coming. Just a few months ago the science magazine “Social Cognitive and Affective Neuroscience” revealed the role oxytocin can play at the mental level, when it comes to fostering relaxation, peace, and processes that meditation, for example, set into motion.

To say it another way: oxytocin doesn’t just connect us with others. It also encourages psychological and emotional mechanisms that help us connect better with ourselves. It has to do with internal balance.

Now that we’ve outlined some of its functions and talked about how important it is, we’re going to try to get to know this incredible hormone, oxytocin, a little better.

Oxytocin, the Hormone of Love and … More

Oxytocin is an oligopeptide composed of nine amino acids. It was discovered at the beginning of the last century and was artificially synthesized by the biochemist, Vincent Du Vigneaud, in 1953.

That was when this compound, so powerful and important in our brain, got put under the microscope. The goal was to identify the role it played in important parts of our lives, like social relationships.

Now we know this chemical substance is the motor that turns on and shapes a lot of our prosocial behaviors. Things like empathy, trust, friendship, generosity, or altruism.

Also, it serves a basic function in our dopamine reward centers. It’s oxytocin that, for example, generates pleasure during orgasms.

And so, given these characteristics, people will assume that it’s responsible for those really intense, significant relationships.

But, as they explain in an article published in the magazine, “Neuroscience and Biobehavioral Reviews,” this last fact is much more complex than we might think at first glance.

Because in affective relationships, there is a lot more going on. There are many different dynamics in the cocktail of neurotransmitters that does include oxytocin.

When we’re in love and feel that intense, crazy, almost obsessive passion, oxytocin actually lowers our inhibitions. Scientists say that this hormone has an effect on our neural circuits similar to that of alcohol.

It encourages us to take risks, trust ourselves, and not see possible dangers or implications the relationship might have. Even if it’s damaging. Even if it’s toxic.

Some may call this the “dark” side of oxytocin. But, it does make it more interesting.

Oxytocin regulates generosity, care, trust, and compassion. If this is true, it’s easy to see why people call it the “humanity hormone.”

But, we can’t forget one very important fact. Even in the animal kingdom, mothers attend to and defend their offspring to the death. Oxytocin regulates their behaviors, too. In fact, we know that humans and dogs are able to have wonderful connections because of this hormone.

“Eyes won’t be of any help to a blind heart.”
-Arabic proverb-

So, instead of just calling it the humanity hormone, we should see it from a wider and more important perspective. As the facilitator of LIFE, in all capitals.

Because, it allows us to connect to each other, other species, our environment, and even ourselves. It facilitates coexistence. We understand that affection, altruism, care, and self-care guarantee survival.

Also, right now a new aspect is being studied and it’s quite interesting. They’ve discovered that oxytocin increases our attention to the social and emotional information in our surroundings.

It helps us interpret which stimuli are important. This way we can remember, interpret, and process them. Here again we have that “connection.” That force that invites us to connect ourselves with what surrounds us. To feel like participants, a part of a whole.

This finding could be significant for people with Autism Spectrum Disorders (ASD). In fact, they’ve shown that an oxytocin deficiency can contribute to the appearance of autism.

That’s why the first clinical trials  have begun to improve their social integration and interaction. Let’s hope it works. Let’s also hope that the discoveries on this amazing molecule keep on coming.

-Patty Van Cappellen, Baldwin M. Camino (2016) Effects of oxytocin administration on spirituality and emotional responses to meditation, “Social Cognitive and Affective Neurosciencie”. Vol 11, nº 10
-Carmichael, MS, Humbert, R., Dixen, J., Palmisano, G., Greenleaf, W. & Davidson, JM (1987) Plasma oxytocin increases in the human sexual response.  Archives of Sexual Behavior 23 :59-79.
The Pleasure Hormone Serotonin and How It Affects Your Body
The pleasure hormone serotonin is a chemical that our neurons produce to communicate with each other. It is a neurotransmitter found in several regions of our central nervous system. Read more »
Link copied!
Interesting Articles
Psychology
What's the Difference Between Clinical Psychology and Neuropsychology?

Psychology
How to Let Go of Negative Memories

Throughout our existence we experience painful situations or circumstances that remain in our memories. We can't seem to forget them,…

Psychology
How to Deal with Your Difficult Child

There are many parents that complain because they have a very difficult child. A child that is always overcome with anger,…