What Can Dogs Teach Us About Our Problems? 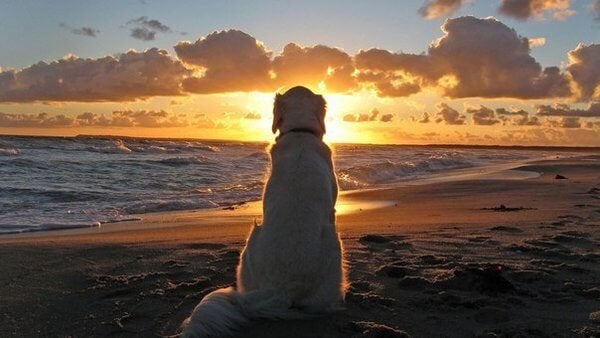 Without a doubt, dogs are endearing creatures. Those of us who love them in a special way and have shared unforgettable moments with them can see the wisdom that their behavior holds.

People, just like dogs, are also animals. It’s true that we can deal with much more complex reasoning or use a more precise language, but this doesn’t mean we’re not inhabitants of this planet, just like dogs.

The problem is that human beings, especially during the last few decades, always believe they are the center of the universe. This mistaken conception of our importance as a species has been- most of the time- the one responsible for many issues, grievances and disturbances.

The good news is that no being- human, canine or feline- is really that important. We simply inhabit this planet. We have been granted the great privilege of living, and we are here to adapt to the conditions at hand in the best possible way. An adaptation in which our behavioral aspects come into play, but also our emotional and physiological aspects as well.

It would be good for us to learn more from dogs. You might be thinking that we have gone insane, but we haven’t. The well-known philosopher Diogenes had already noticed all of this. He was nicknamed “The Dog”, because he’d learned to shed his presumed importance and ego. He learnt to be more spontaneous, shameless, and more free. Above all, he learned to distinguish his friends from his enemies.

Diogenes and the dogs

Diogenes praised the virtues of dogs and tried to imitate them, behaving like them. In order to behave in this manner, he had to start to focus on his problems as if he truly were a dog. This allowed him to better administrate the importance he gave every event, both external as well as internal. He lived in destitution, in a box to be precise. He was always surrounded by his family, the dogs. In fact, he even went to the bathroom in public!

He put several ideals into practice through various anecdotes: a solitary life, naked, and with no other home besides a barrel, constantly renouncing all worldly goods created by human society. Doing so because he understood that we didn’t really need them in order to survive.

Diogenes attempted to put into practice a radical idea of freedom. Just like a dog, he was shameless. He feverishly opposed and even attacked the pre-established social norms, the traditional ways of living.

Those who started nicknaming Diogenes “The Dog” were actually trying to insult him. But, just like a good dog, Diogenes didn’t give it any importance. He was even proud of this new name, using it as his emblem. He thought that this way of calling him perfectly identified him.

Diogenes wanted to detach himself from all material goods which carry the false label of being “necessary”. Goods which we have all become slaves of. He decided to live in austerity, just as dogs do, and he realized that one could always be more humble.

It’s obvious that the story of Diogenes is an exaggeration, and we’re not trying to convince the reader to take it literally. We don’t want you to start behaving this way. However, we do want the undertone of the story to be understood, and for you to decide if you want to take a part of it and start applying it.

If we reflect upon this for a moment, we will realize that many of our emotional problems emerge from our egocentrism. For example, a difficulty that this egocentrism generates can be appreciated in people who have a hard time delegating tasks. Also, in people who forget that they are one of a kind, but not indispensable.

We all have giant-sized egos, and this is precisely what brings about our suffering.

If you think like a dog, your own dog, or the neighbor’s or a street dog, and observe it, you’ll be able to see that dogs are only interested in things that are truly necessary. Dogs care about protecting themselves from the weather, moving around, finding food and water on a daily basis, procreating, playing games and getting attention. It doesn’t have to be the best dog in town, nor does he have to do everything perfectly.

We all live certain optional things as if they were necessities. We want a good job, a good salary, a house with a pool, an attractive mate, to travel, professional success, to be renowned and praised. Furthermore, if these needs aren’t satisfied, our self-esteem is damaged. We feel like we are less or worse than others.

Desiring all of this is legitimate, as long as we don’t succumb to the temptation of turning all of those desires into absolute and indispensable needs.

If we want to start living a more “doggy” life, the first step is to not feel so important. Let’s not get depressed if people don’t recognize us. Let’s not get riled up in the face of a verbal injustice, or compete as much with others to try to stand out and obtain the applause.

Be as free and open as a dog

The second step is to be less modest. We aren’t going to go to the exaggerated extreme of going to the bathroom in the middle of the street! Yet, we should be more open, show ourselves just as we are. Maybe some of our defects will be more exposed. But, that’s better than having to pay the price of not reaching our full potential.

If I’m ashamed to dress a certain way because I consider myself skinny, fat, pale, dark or whatever it may be, I’m going to start opting to dress however I would like. Doing so regardless of the complexes that society has tried to instill in us. Dogs aren’t ashamed because they are bigger, smaller, of one color or another.

My set of values should also change. Physical attractiveness, mine as well as that of others, material possessions or being superior to the rest need to stop being so important.

Can you imagine a dog caring about what another one looked like, worrying about their physique, or if they are “in style” or not? Do you think a dog would envy another because their pet bed was bigger or more expensive? Obviously, they don’t care about those things at all.

And lastly, let’s be less needy. As Diogenes showed, you don’t need that many things to be happy and at ease. Nowadays, if you’re reading this, you at the very least have a cellphone or a computer, which means that you have covered your basic necessities. Because cellphones and computers aren’t necessities, they are luxuries. So, what do you have to be unhappy about?

So, why don’t you try out being more like a dog?

Culture
The Three Men: A Tale about Humbleness

Culture
The Ensō Circle: A Zen Symbol of Enlightenment

In Zen Buddhism, the ensō circle symbolizes simplicity and harmony. Only those who keep an open mind and enjoy internal…