The Myth of the Phoenix: Our Amazing Power of Resilience 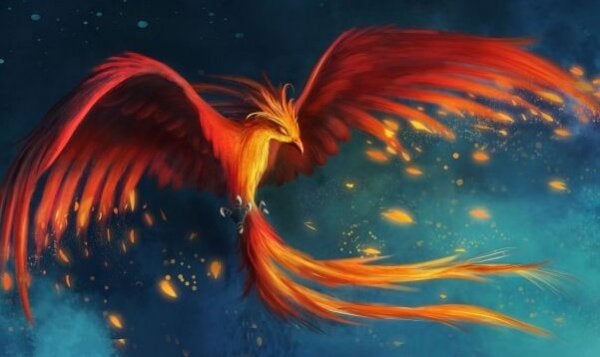 In his  book, “Symbols of Transformation,” Carl Gustav Jung explains that human beings have a lot in common with the Phoenix. That archetypal fiery creature, with the ability to rise majestically out of the ashes of its own destruction, also symbolizes the power of resilience. By this we mean our incomparable ability to update ourselves into much stronger, braver, and brighter beings.
If there’s a myth that’s nourished basically every doctrine, culture, and origin story of our countries, there’s no doubt its the one that references the Phoenix. People said of the Phoenix that it’s tears had healing properties, that it had extreme physical toughness, control over fire, and infinite wisdom. Basically, it was one of Jung’s most powerful archetypes. Contained within its fire were equal parts creation and destruction, life and death…

So, it’s interesting to find out that we can see early references to its mythology, whether in Arabic poetry, Greco-Roman culture, or even a lot of the East’s historical legacy. In China, for example, the Phoenix (or Feng Huang) doesn’t just symbolize the highest virtue, strength, or prosperity. It also represents the yin and yang, that duality which shapes the whole existence of the universe.

But, and this is something worth remembering, it’s Ancient Egypt where the first cultural and religious testimonies surrounding this figure appear. So, it’s also where this image of its resilience we have nowadays was shaped. Every detail, shade, and symbol outlining this myth makes a great exercise to reflect on.

The Phoenix, or the Power of Rising out of our Ashes

Viktor Frankl, a neuropsychiatrist and founder of logotheraphy, survived the torture of Nazi concentration camps. Just as he explained in a lot of his books, a traumatic experience is always negative, but, what happens as a result of it depends on the person. It’s in our hands whether we want to stand up again, come back to life once more out of our ashes, in an astonishing victory. Or, on the other hand, to just sit and stew, to crumble…

This admirable ability to update ourselves, to gather our breath, desire, and strength out of our suffering and broken glass has to pass through a truly dark phase that a lot of people have probably experienced personally. We’re talking about “death.” When we go through a traumatic moment we all “die a little bit.” We let go of a part of us that will never come back, that will never be the same again.

In fact, Carl Gustav Jung establishes our similarity with the Phoenix because this fantastical creature also dies. It also brings together the necessary conditions to die, because it knows that a much more powerful version of itself will emerge out of its remains.
Share

So, and out of all the myths surrounding this figure, it’s Egypt that offers us what we’ll call those “key points” we should pause on to better understand the relationship between the Phoenix and resilience. Let’s take look at those next.

The Phoenix in Egypt

In his writings, Ovid explained that in Egypt the Phoenix died and was reborn every 500 years. For the Egyptians, this majestic heron was Bennu, a bird associated with the swellings of the Nile, the Sun, and death. According to them, it was born under the tree of Good and Evil. This fantastical creature understood it was necessary to update itself every so often so it would gain more wisdom. For that, it followed a very meticulous process.

It flew all over Egypt to make itself a nest with the most beautiful elements: cinnamon branches, oak branches, nards, and myrrh. Then, settled into its nest, it would sing one of the most beautiful songs the Egyptians had ever heard. Right afterwards, it would let the flames consume it entirely. Three days later, the Phoenix was reborn full of strength and power. Next, it would pick up its nest and leave it in Heliopolis’s Sun Temple to initiate a new cycle of inspiration for the Egyptian people.

Resilience and our “Nest” of Transformation

As we’ve seen, the Egyptian myth of the Phoenix is a gorgeous story. But, let’s now analyze some of its details. For example, let’s pause and look at how the Phoenix makes its nest. It looks for the richest materials in its territory. The ones that simultaneously combine delicacy and strength, and will help it in its transformation, in its rise.

If we really think about it, this process is very similar to the one that shapes the psychological dimension of resilience. Because we also look for those magical elements to construct a really strong nest where we can increase our strength.

Human beings should spread their wings to fly over their internal world looking for the branches of their self-esteem, the flower of their motivation, the resin of their dignity, the territory of their hopes, and the warm water of their self-love…
Share

All those components will help it rise up but not before being aware of one aspect. The aspect is that there will be an end, that a part of ourselves will also leave us, will become ashes, the remains of a past that will never return.

But, the wind won’t carry away those ashes, just the opposite. They’ll form part of ourselves in order to give shape to a being which comes out of the fire stronger, bigger, wiser…Someone that might become an inspiration to other people, but who, above all else, will help us keep moving forward with our heads held high and our wings wide open.

Scars Are a Sign of Resilience
the strength to get out of bed? That's why today I'm going to talk to you about a term that's become very trendy in contemporary psychology: resilience. Read more »
Link copied!
Interesting Articles
Psychology
Neuroinflammation, or the Inflammation Theory of Depression

There are more and more studies coming out in support of the inflammation theory of depression. They say there's a link…

Let’s be honest: we’re almost always connected whether it is to our smartphone, computer, or tablet. The digital world has…

Have you ever been around a perfectionist? Probably, yes. Their behavior is quite interesting, and sometimes entertaining. Perfectionists have a need to achieve…

Psychology
The Gift of Good People Is in the Details

Little details build entire lives. There are people who don't perceive them, people who aren't able to see the effort that…