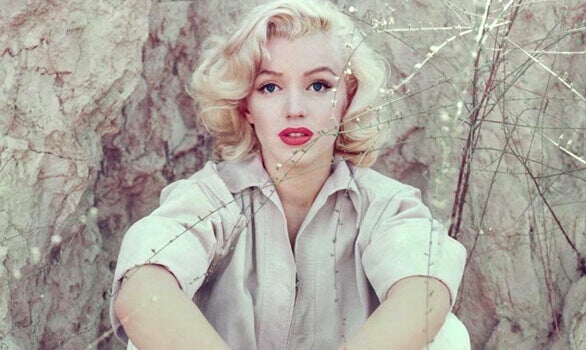 Marilyn Monroe syndrome defines those people who everyone loves, but who no one really tries to get to know deeply. They’re the kinds of people broken by loneliness, just like Norma Jean herself was. She was that woman in her eternal role as a “dumb blonde,” but who actually had a much deeper, more reflective, and self-demanding flip side that few people ever saw.

We’re not going to go into how this quintessential movie diva died. People have already written plenty about the topic. Recent books like “Marilyn Monroe: A Case for Murder,” by the journalists Richard Buskin and Jay Margoli, can give you a lot of information about it. What interests us right now is the kind of psychological profile that characterized Marilyn herself. The profile with an essence that led to a syndrome with her name on it.

“Life — I am of both of your directions. Life Somehow remaining hanging downward the most but strong as a cobweb in the wind.”
-The poems of Marilyn Monroe-

In her book, “The Marilyn Syndrome,” the doctor Elizabeth Macavoy says that before Marilyn died physically, she’d already died of emptiness and solitude. Behind all the glamour, spotlight, and the famous Happy Birthday Mr. President she cheekily sang for John F. Kennedy, there was a woman who’d been in pieces for a long time. She understood that happiness was what everyone expected to see in Hollywood movies, but in reality (her reality) all there really was was selfishness and deceit.

What exactly is Marilyn Monroe Syndrome?

Marilyn Monroe Syndrome has become very common nowadays. It shows up in people like actors, singers, and in general anyone who has a certain amount of social success. These people usually outshine everyone else through their charm, beauty, or skill at something in particular.

Everyone loves them, adores them, and wants to be close to them, part of them… But in reality, most of the time these people are just tools, dolls other people use whenever they need to climb the social ladder and improve their image. They just want to have that “radiant” person everyone admires close to them. And the “person object” doesn’t realize that’s what they are at first. Being the center of everyone’s attention is almost addictive.  It’s comforting and definitely pleasurable, especially when you have a fragile, extremely low self-esteem.

So, in Marilyn’s case, that whole whirlwind of attention was actually cathartic after a traumatic childhood and the rushed teenage years that lead to early marriages. But little by little she started to realize something. To survive in that world of cameras, producers, and movie directors, she had to make up an role for herself as an extremely naive woman. Someone carefree and always radiant. That was the image everyone wanted, the one that sold tickets, the one that everyone fell in love with.

Norma Jean perfectly created that role, and yet no one ever gave her an Oscar for masterfully playing her role as Marilyn Monroe. Not many people knew she was forced to constantly bring down her intelligence levels to survive in Hollywood and make that naivety her key to success. She always took extreme care with that childlike tone of voice she used to be seductive, giving shape to a woman who was nothing like her…

The danger of creating a role to win admiration and always be the center of attention and permanent desire, is that your very identity ends up fading away. Arthur Miller, Marilyn’s last husband, said she was like “Dr. Jekyll and Mr. Hyde.” Miller was maybe one of the few people who actually got to know Norma Jean’s other side. The side with the reserved, solitary, and reflective woman who liked to write poetry.

He said that she had “an instinct for poetry,” and she’d been very skillful in getting to where she was. But, Miller also said that she lacked cynicism, that she needed to have her feet on the ground. That might have been true, but what Marilyn was really missing was a good sense of self-esteem.

“Strong as a cobweb in the wind — I exist more with the glistening frost.”
-The poems of Marilyn Monroe-

But it’s worth mentioning that those weren’t good times. Testosterone and macho culture ruled the movie world.  Marilyn herself tried to start a production company (Marilyn Monroe Productions), but that was too bold for them and they harshly punished her and saw it as a spit in the face of the film industry. So, defeated, she went quietly back to her role as the naive woman.

Marilyn Monroe Syndrome tells us that playing a role to survive and be loved by others comes at a high price. Right now you might still be in the spotlight, feeling full of joy about all that positive reinforcement feeding your self-esteem. But you’re not actually feeding your self-love, what you’re doing is poisoning it.

Social approval and success don’t always bring you happiness. A lot of the time they leave you empty and slowly, inevitably wear you out.

12 Quotes by Marilyn Monroe: Creating the Myth
It's almost impossible not to recognize Marilyn Monroe's face nowadays. She's everywhere. But what was really behind that blonde hair and those captivating eyes? Read more »
Link copied!
Interesting Articles
Psychology
Childhood Trauma and Depression in Adults

No stage is simultaneously more intense, wonderful and vulnerable than childhood. Those early experiences eternally mark not only much of the…

It's true. Some people want you to do well, but not better than them. This kind of person may appreciate…

Theories
Description and Characteristics of the Pleasure Principle

The "pleasure principle" is all about those moments when you're blissful and happiness comes out of your every pore. Above…

Creative visualization can be defined as a technique where the imagination is used to help achieve desired dreams or goals. It…