Looking Out the Window: A Great Exercise in Reflection and Introspection 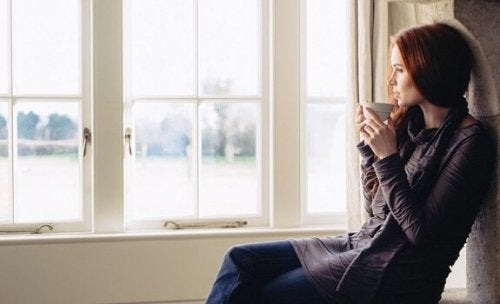 Looking out the window and letting your eyes get lost in the glass isn’t a waste of time. Sometimes, when you’re looking out that threshold, you’re not actually trying to look at the outside world. What you might be trying to do is use its reflection to do some introspection. You use it to help yourself look within and find new possibilities for yourself. In reality, there aren’t many mental exercises as healthy as this.

If you’re familiar with the work of Edward Hopper, you’ll definitely remember all his paintings of a lone woman looking out the window. In some she’s looking out from a hotel room, or a bed, or a café, etc… The image is always the same: a female gaze going beyond the glass, miles away from the space she’s in.

“It’s not always easy to tell the difference between thinking and looking out the window.”

Not many paintings have sparked as much mystery as these. What are they looking at? The answer is simple: everything and nothing at the same time. Hopper was an expert in creating moods and atmospheres. He knew how to convey hard-to-define emotions. Light, shapes, colors, it was all there to make us feel a certain way. That’s why he would so often put windows near his characters.

Windows are gateways to the human mind. They’re an indispensable resource for so many dreamers out there. They’re also important for people who need a break after a stressful day, so they lean their head against the glass on the subway train’s windows. Those are the moments we start to daydream and give our brain some relief, freedom, and well-being.

Looking out the window: an exercise in introspection

If you go to any elementary, middle, or high school classroom, you won’t have a hard time finding a student looking out the window. They’re absent, disconnected from their surroundings. At the same time, they’re connected to their mind-wandering and their daydreams. Rather than getting rid of this behavior the older we get, we actually do it with more excitement. But that doesn’t mean it’s seen in a positive light. Looking out the window is synonymous with unproductiveness. It means you’re not there in the present moment, that you’re not dealing with your responsibilities.

Admit it, there probably aren’t many times you let yourself wander around to see what’s going on inside your head. That’s because when you do that, you stop moving, stop creating, and stop performing. In a society focused on results, that’s a major issue. Maybe that’s why looking out the window is something most of us prefer to do when we’re alone. It means leaving your eyes on a bridge between two places. But your goal is to look out, not see what’s going on in the outside world.

This is like a backward journey. You’re not interested in what’s outside, because you’re plenty familiar already. Traffic, crowds of people, a city wrapped up in the same old routines, etc… Your brain tugs on you like an anchor in the deepest depths and pulls you into the sea. It’s in this place that you engage in an amazing exercise for your psychological and emotional health.

We live in a world obsessed with productivity, you’re well aware of that. Maybe that’s why so many people have forgotten the enormous potential of daydreaming. Sometimes the most important things, or the biggest decisions, come from looking into a window. It’s almost like your mind is staging a rebellion and making you do something different. It’s also like getting in touch with your wisest (but hidden) self and listening to what it has to say.

Windows: the places that allow you to daydream

Experts in the psychology of creativity like Scott Barry Kaufman and Jerome L. Singer talk about this in an article in Psychology Today. They say that, in today’s world, daydreaming still comes with a huge amount of stigma. If you look out the window for half an hour instead of working on your computer, then you’re lazy.

The same two psychologists even did a study about this. They found that 80% of businesses, like Adobe, think that you can boost creativity through continuous work and activity. So anyone who decides to take a break to grab a coffee and stare out the window just can’t take the pressure, they’re not productive.

In today’s world, we still associate motion with performance and passiveness with laziness. But we need to change these old, rusty ways of understanding the world. Daydreaming means chasing after all the hidden wonders inside your own brain. It means training your mind to expand even farther through introspection, curiosity, symbolism, and imagination.

One of the best places to find all of this hidden potential within you is in front of a window. Looking out into the world at some point in the day is like making an appointment with yourself. It’s like crossing the threshold into an internal world that so many of us neglect. It’s also a place that we don’t look after or care for because the outside world asks too much of us. Today’s society wants us all to be in a state of hyperconnection focused on all the endless stimuli out there.

So learn to set your own limits and sit in front of a window every once in a while. Look into the reflection where you can find your dreams, your internal beauty, and a world full of infinite possibilities…

Salvador Dali’s Method to Wake Up our Creative Side
Salvador Dali once said that he didn't do drugs, he was drugs. He had a peculiar method of tapping into the surreal using dreams and we find out exactly how he did it. Read more »
Link copied!
Interesting Articles
Psychology
5 Steps to Overcome Difficult Situations

The effects of stress on your body are more far-reaching than you would believe. If the tension and a negative mental…