10 out of every 10,000 may suffer from a cerebral aneurysm in their lives. Although it’s asymptomatic, this vascular condition has some risk factors that you should keep in mind. 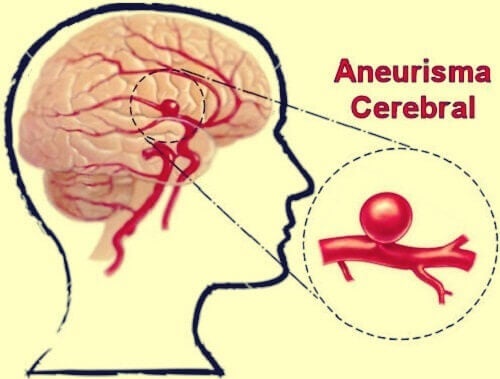 An intracranial aneurysm is a dilation of a brain artery wall. The most challenging aspect of these vascular conditions is that they tend to present no symptoms. So little by little, and without the affected person noticing it, this area grows into a bump, which may end up bursting. If you don’t act quickly in such a case, the consequences can be fatal.

Most of you know a person who’s been in this delicate situation. There are people who, thanks to early detection, have benefitted from quick intervention. One classic example of such an intervention is embolization. People who are helped by early detection may be able to continue their normal lives without significant consequences. Other patients, on the other hand, have to live with the effects of a ruptured aneurysm.

Whatever the case may be, there is one piece of information that you shouldn’t forget. This is a condition that tends to appear most commonly between the ages of 40 and 65. Nevertheless, it can also affect young people and even children. Sometimes, certain genetic problems or arteriovenous malformations can result in these dangerous arterial changes in the brain.

Intracranial aneurysms can affect anyone regardless of age. However, they’re more common in people who’re over 40 years of age. They also tend to affect more women than men.

An intracranial aneurysm is a vascular alteration that can appear in an artery or a vein in the brain. The blood flow accumulates in a segment and this ends up causing a blood vessel dilation. This vessel then expands in the shape of a bubble.

A study undertaken by the Department of Surgery of the College of Medicine of the University of Oklahoma explains that almost 85% of aneurysms are located in nearly the same place. They are usually located right at the base of the brain. This is precisely the location of the circle of Willis.

Depending on the shape, size, and location, it’s possible for you to be able to distinguish between three types of intracranial aneurysms:

What are the symptoms of an intracranial aneurysm?

Just as we indicated in the beginning, it’s common for an intracranial aneurysm to be asymptomatic. That being said, they’ll manifest some symptoms if they rupture. That’s when you should act quickly. Keep the following clues in mind. They may indicate that you’re suffering from an aneurysm:

Doctors have different scales for evaluating the severity of an intracranial aneurysm. The most common of these are the Glasgow scale (if the person has lost consciousness) and the Hunt and Hess scale. In the latter, the doctor will assess the following:

If you have a family history of the condition, experts recommend that you get checkups and diagnostic examinations. The most common way to identify the presence of an intracranial aneurysm before it bursts is through the following:

On the other hand, there’s some good news about this condition. There are many people who go through life without ever knowing they have a brain aneurysm. In other words, not all of these cerebrovascular alterations end up in a rupture. The probability isn’t very high. Nevertheless, there’s always a risk that it can happen.

When treating an intracranial aneurysm, you have to keep a lot of factors in mind. The first is to consider whether or not it’s already ruptured.

Factors on the second level are the size of the aneurysm, its location, the age of the patient, and whether the patient has other neurological conditions. Nevertheless, the good news is that when a doctor has detected the condition early on, treatments can be effective. Additionally, the surgery required to treat it usually isn’t very difficult. An endovascular approach is often enough. These are the most common types:

This procedure consists in introducing a small catheter through the patient’s groin and then following the brain artery all the way to the brain. Once there, the surgeon blocks the aneurysm.

For this, the surgeon will use stents, which are devices that control and channel these pathologies.

A cerebral bypass requires that the patient stay in the hospital between 3 to 5 days. For this procedure, the intervention is a bit more complicated than the embolization. That’s because it requires undertaking a small craniotomy in order to apply that bypass. The end goal is for the bypass to regulate and reduce the abnormal blood flow to that vein or artery.

Finally, for the most severe of cases, the doctors may opt for an intervention that involves an incision in the skull. That being said, the entry time is short and the intervention is simple. Some titanium devices are inserted in order to channel and treat the aneurysm.

Whatever the case may be, all of these treatments are highly effective when the aneurysm hasn’t ruptured. It’s clear that you may not always be so lucky. You may not always be aware of their existence because they’re asymptomatic. Nevertheless, it’s important to keep this information in mind in order to be ready and know how to act in case they affect you.

Cerebral Lobes: Characteristics and Functions
The brain is divided into 4 different cerebral lobes. Each one of them processes information we use everyday. Read on to learn more! Read more »
Link copied!
Interesting Articles
Brain
What's Olfactory Memory and How Does it Work?