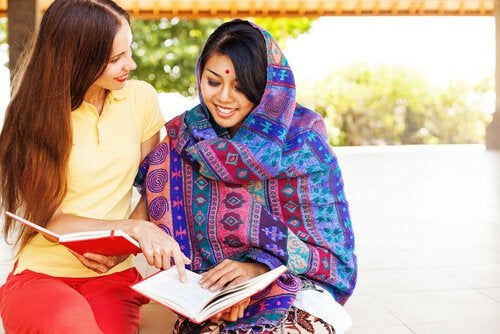 All societies have rules, values, and symbols that are different from others. That’s why we say that different societies have different cultures. But it’s impossible not to bring up Hofstede when it comes to the study of cultural differences. He’s the researcher who created the five cultural dimensions model.

Hofstede showed that people share characteristics on a regional and national level. He said that these characteristics affect their behavior, and don’t go away over time. These cultural patterns are what he calls cultural dimensions.

The five dimensions are power distance, individualism vs. collectivism, masculinity vs. femininity, uncertainty avoidance, and long-term orientation vs. short-term normative orientation. Every cultural dimension has two opposite sides. A society can score high or low in each dimension, and that’s what leads to different characteristics and behavior.

Power distance is the way a society accepts power in its institutions and organizations. The countries with a small power distance usually tend to have decentralized organizations. On the other hand, countries with a big power distance usually prefer centralized authority. This dimension is about how the least powerful members of society accept power and if they expect it to be divided equally. The main thing here is how a society deals with inequality between people.

People in societies with a high level of power distance will accept a hierarchical order. It’s okay that everyone has a place, with no explanation necessary. In societies with a low level of power distance, people make an effort to equalize the distribution of power. They always demand justification if there are any inequalities when it comes to power. Some examples of countries with high power distances are Malaysia, Guatemala, and Panama. On the other side, you have countries like Austria, Israel, and Denmark.

With this dimension, we can define individualism as a preference for an unstructured social environment. People have to look after themselves and their close family members. Collectivism is the opposite. It means there’s a preference for a highly connected social environment. People don’t have to worry that their relatives or the people in their group will look after them. All you give in exchange is your unquestioning loyalty.

Lastly, individualism and collectivism are the cultural dimensions where you see references to how much citizens value independence, a commitment to the rules of society, and loyalty to the group they’re part of. Individualistic people look out for themselves, value personal success, and put their own interests first.

On the other hand, collective people have a sense of belonging to their groups. Collective interests are also more important to them than personal interests. They see hierarchy and relationships with other people as very important. According to studies about this dimension, the most individualistic countries are the United States, Australia, and the United Kingdom. Some of the most collective countries are Guatemala, Ecuador, and Panama.

When it comes to this dimension, masculinity means a society prefers achievements, heroism, assertiveness, and material rewards for success. This kind of society is generally also more competitive. The opposite, femininity, involves a preference for cooperation, modesty, caring for the weak, and quality of life. These societies generally focus more on agreement. Because of what all these characteristics involve, sometimes we use the terms hard cultures and soft cultures.

Uncertainty avoidance is the dimension that shows up in how comfortable people in a society feel about uncertainty and ambiguity. The main thing here is how a society confronts the fact that you can never know the future. Should you try and take control of the future, or just let things happen on their own?

For example, a low score in this dimension shows that the people in that country are self-motivated, more likely to take risks, and less independent. This is far from how cultures with a high uncertainty avoidance index are. They like stability, rules, and social norms. This is why they try to avoid risks as much as possible (which is its own risk – slower progress). The countries with the highest uncertainty avoidance index are Greece, Portugal, and Guatemala. The countries with the lowest level of this index are Singapore, Jamaica, and Denmark.

All societies have to keep their bonds with their past at the same time as they deal with the challenges of the present and future. But societies usually prioritize these two goals in very different ways. Societies with short-term orientation generally try to keep firmly rooted traditions and rules. They have a very suspicious view of social change. Meanwhile, societies with a culture more focused on the long-term are usually more practical. They make much more of an effort to invest in modern education. They do this because they see it as a way of preparing themselves for the future.

So long-term orientation focuses on the values that have to do with future rewards. People are willing to push back social success or even emotional gratification in the short-term so they can prepare for the future. Societies with this cultural outlook value persistence, perseverance, saving, and an ability to adapt to new situations.

Short-term normative orientation focuses on the past and present and sees them as more important than the future. A society with a short-term normative orientation values tradition, current social hierarchies, and fulfilling social obligations. Immediate gratification is more important to these societies than long-term satisfaction. The most long-term oriented countries are China, Hong Kong, and Taiwan. The most short-term oriented countries are Venezuela, Uruguay, and the United Arab Emirates.

What kind of country do you live in?

Maybe now you want to find out your own country’s score. Well, Hofstede set up this page where you can look yours up and compare it to others. But even if a country scores high on certain cultural dimensions, that doesn’t mean they apply to every citizen. That usually only happens with small societies that have a lot of shared beliefs. That’s also why the cultural dimensions theory focuses on societies and big groups. In the end, individual people can always be different from the group they belong to. They can always have different scores on these cultural dimensions.

How Do We Relate to Cultures Different from Our Own?
There tends to be very little talk about cultural intelligence and a lot about emotional intelligence. Read more »
Link copied!
Interesting Articles
Psychology
Balanced Thinking: a Perspective in Harmony with the World

Culture
5 Things a Selfie Says About You

When you take a selfie, do you think about how people are going to perceive it? Do you ask yourself…