The Electra Complex: What Is It and What Does It Do? 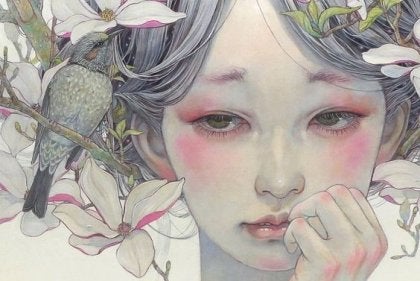 It was Carl Gustav Jung who explained one of the most well-know theories about girls’ psychosexual development: the Electra complex. The Swiss psychologist was inspired by the history and symbolism of the Greek myth of Electra.

Electra was the daughter of the king of Mycenae. She plotted a sophisticated plan along with her brother Orestes to avenge the death of their father. It involved killing her own mother and her mother’s lover.

It’s interesting to see the etymological meaning of the name. Electra means both “amber” and “spark” due to the static electricity that comes from amber, a fossil resin.

There were many modern authors who saw something complex and striking in the character and name. For example she inspired well-known novels such as Mourning Becomes Electra, by Eugene O’Neill. This book discussed the obscurities and psychological recesses inside a family of the 30’s.

“The pendulum of the mind alternates between meaning and nonsense, not between good and evil.”

Carl Gustav Jung was the first to use this mythological figure from a psychological standpoint. In 1912, the concept of Electra would serve to illustrate girls’ early fixation on their parents.

The Electra complex is also the counterpart to the Oedipus complex, developed by Sigmund Freud. The Oedipus complex comes from the Oedipus myth of Sophocles, from classical Greek mythology. Here, the famous father of psychoanalysis held the idea that every boy goes through a stage of being attracted to his mother, perceiving his father as a rival.

Psychologists see this type of attraction (which may sound unusual to the average person) as a normal stage of psychological development for all children between 3 and 6 years old. After this age, this fixation or preference dissolves by itself naturally. Now let’s look at it in more detail…

How does the Electra complex start?

To understand this complex and how it forms, we have to get in the right context. We’re coming from a psychoanalysis approach. One aspect Sigmund Freud devoted much of his work to was psychosexual development and how sexuality is managed in the early stages of life. It was one of the great revolutions of Freudian thought. Until then, psychologists had not thought that children could have sexuality.

“To be a father, you have to stop being a son.”

The way we develop our sexuality and respond to sexual impulses during early childhood will determine how fully we mature and how balanced and “healthy” our psycho-affective development is. However, maintaining certain fixations can lead to mental disorders. Freud himself labeled these neuroses and problems as “aberrant”.

But Carl Gustav Jung differed on these issues. Something that Jung perceived, in the first place, is that there was a serious “theoretical vacuum” in Freud’s theory. The Oedipus complex focused only on men, and only on the intense physical and emotional bond between sons and mothers in the first 6 years of life.

Therefore, he developed his theory of the Electra complex in 1912 to fill in that gap. His idea was to bring that perspective to the field of female development.

Characteristics of the Electra complex

The Electra complex involves different phases. Next we’ll explain very briefly what each phase is and how it manifests.

First stage: being attracted to the mother

Carl Jung was certain that the emotional bond between a girl and her mother is much more intense than between a boy and his mother in the first 3 years of life. This initial attachment will later mark “the return”. We’re talking about the need for the girl to identify with her mother to incorporate some of the maternal characteristics into her personality and even internalize her morality in the “super ego”.

Second stage: being attracted to the father

At 3 or 4 years old, the girl stops having such attraction to her mother and begins showing attraction towards her dad.

The natural resolution of the Electra complex

When the girl reaches 6 or 7 years old, she will again feel the need for closeness and identification with the mother. Thus, behaviors of imitation and curiosity towards the feminine world begin as she settles into her gender role.

Jung emphasized in his theory that this whole phase is part of a girl’s normal development. It makes up the basis of her emotional, social, and psychological behavior, which will continue to mature in later years. In the end, all friction should dissipate and girls shouldn’t see their mothers as enemies or rivals.

What is true about the Electra complex theory?

Now, if a girl displays behaviors as common as looking for dad’s affection more than mom’s, choosing to spend most of her time with him or saying she wants to “marry dad”, there is nothing bad or pathological about it.

After all, her father is her closest male role model. The fantasies, games, and behaviors will disappear naturally as socialization with peers becomes more important.

Actually, Carl Gustav Jung himself didn’t even give a completely biological or universal value to these behaviors. It is just a behavior that happens in some girls and usually resolves after a short time.

4 Quotes by Carl Jung on Personal Growth
We can learn a lot from the thoughts of Carl Jung on personal growth. Can you think of ways to apply these in your own life? Read more »
Link copied!
Interesting Articles
Psychology
5 Signs Your Child Has Autism

Attachment is the affective bond that develops primarily out of a search for safety and well-being. In some cases, the…

Psychology
Mid-life Crisis? Not at all, it's an Awakening!

Somehow we still believe that everyone has to go through the so-called mid-life crisis. Yet, for many of those who…

Psychology
What Can we do to Prevent Relapses into Anxiety Problems?

Anxiety is so present in our daily lives that sometimes it doesn't take much to make it overflow. That's when…