Dutton and Aron and the Misattribution of Arousal Theory

The misattribution of arousal theory points out that sometimes we attribute the causes of what we feel or experience to unrelated factors. This was evidenced in a classic experiment conducted by psychologists Donald Dutton and Arthur Aron. 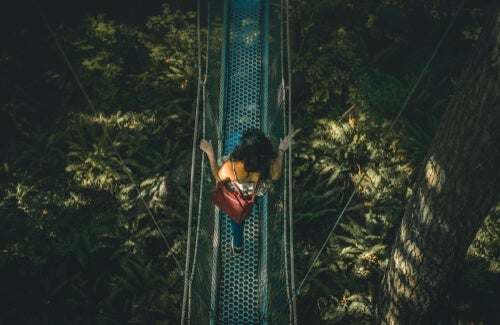 The Dutton and Aron experiment gave life to the misattribution of arousal theory. This is one of the biggest classics of psychology. It’s related to the attraction between two human beings and helps us understand just how surprising the human brain can be.

Attraction and love are complex feelings which involve emotions, education, and attitudes. However, there’s more to them: hormones and neurotransmitters.

The Dutton and Aron experiment shows how misleading the butterflies we feel in our stomach can be. The truth is that what conditions attraction sometimes is more brain chemistry than personal taste.

The misattribution of arousal theory is a derivation of the attribution theory postulated by Austrian psychologist Fritz Heider in 1958. This gave rise to the fundamental attribution error theory by Lee Ross and the cognitive dissonance theory by Leon Festinger. In some way, Dutton and Aron retook these theses and used them as foundations to their famous experiment.

Fritz Heider postulated the attribution theory. According to it, we naturally tend to make causal attributions of the events/changes we witness. In other words, we’re interested in knowing why people do what they do and why everything happens. This is something we do automatically. The point is that we don’t stop for a second and think about how valid these attributions really are.

Moreover, the misattribution of arousal theory postulates that we oversize people’s internal conditions in order to know how to act. For example, personality rather than paying more attention to other external factors. Instead, when we explain our own behavior, we give more value to external factors than internal motivations.

The phenomenon of cognitive dissonance expresses this as well. Let’s explain this with an example. If we ever catch ourselves in a situation where two of our beliefs or behaviors are in conflict, we tend to come up with reasons to harmonize them.

The Dutton and Aron experiment

The experiment that Donald Dutton and Arthur Aron conducted is commonly known as the Capilano Suspension Bridge study. As the name suggests, these two psychologists used two bridges to prove their point. The first bridge was small, solid, and modern. The other, on the other hand, was located on the Capilano Canyon, 230 feet above the ground. It was an old bridge that swayed in the wind and trembled at every step.

There were two groups of men. Dutton and Aron asked each group to cross one of the two bridges. Now, both groups met a very attractive woman in the middle of each bridge. She told them that she was doing a study on landscapes, which was an excuse to ask them to describe part of what they saw. In the end, she gave them her phone number in a flirtatious manner.

So what was the result? Basically, the men who crossed the short and safe bridge pretty much didn’t look at the woman twice. Those who crossed the dangerous bridge called the woman and felt very interested in her. What’s behind these two different behaviors?

The misattribution of arousal theory

What this experiment allowed us to verify is that sometimes the brain can be very deceiving. Those who crossed the dangerous bridge felt more adrenaline than the ones who crossed the safe bridge. Therefore, we can assume that finding an attractive woman in the middle of their journey had a very positive impact on them. This, in turn, deceived the actual reason why they felt attracted to the girl.

The cognitive dissonance theory applies perfectly to this case. The feeling of fear came into confrontation with the stimulation of an attractive woman.

The volunteers of the experiment had a mixture of emotions: a dose of adrenaline along with the woman’s flirty attitude resulted in a strong attraction for her. In short, the two sensations came together and led to that result.

It’s been proven that, in risky situations, people tend to create more sympathetic links with those close to them. Of course, this refers to controlled risks, not extreme ones. When the situation is horrific or causes panic, the opposite is bound to happen. The individual sees those around them as a threat and is prone to reject them.

The Role of Physical Attraction
In this article, we're going to tell you about the role physical attraction and attractiveness play in relationships (both romantic and platonic). Read on! Read more »
Link copied!
Interesting Articles
Social Psychology
The Roles and Functions of a Social Psychologist