Depression relapse is a common clinical reality. Aside from the difficulty of having to start over, you also have to deal with guilt, blame, and loss of confidence. 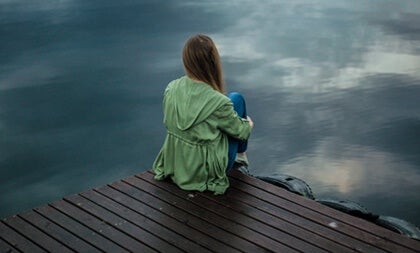 Suffering from a depression relapse can be frustrating and scary. If that weren’t bad enough, the relapse is usually accompanied by a sense of guilt and blame. Statistics show that depression relapse is very common; approximately 80 percent of patients who have suffered from depression will relapse at some point within ten years.

One of the conditions with the highest relapse rates is persistent depressive disorder (dysthymia). The symptoms of this disorder generally come and go for years. Although the intensity of the symptoms varies, the relapses usually last for at least two months. As you can imagine, those who suffer from dysthymia are in an exhausting and complex situation.

All of this shows that we still don’t have the adequate tools to address mood disorders. There’s a serious lack of concrete and viable available information about the difficult reality that so many people live every day.

Many people still think, for example, that those who suffer from depression are weak in some way. In spite of the advances in psychology and all the information available online, there’s still a stigma surrounding cognitive disorders. Not only that but we have still have a long way to go in terms of effective treatment for depression.

Depression is a disorder that requires a short- and long-term approach. If your therapist or psychiatrist declares you “cured” after pharmacological or therapy-based treatment, that doesn’t mean you’ve closed the door completely on that chapter of your life. Depression will keep knocking. It doesn’t usually go away without guided intervention, a will to change, or support from the environment. Although medication can help, it doesn’t cure the condition.

What often happens is that patients with evident clinical improvement still experience what experts call “residual symptoms”. These symptoms can often lead to relapse and can be hard to detect. A 2011 study from the University of Dublin on the prevalence and nature of depression found that:

Let’s delve deeper into these ideas.

Your thought patterns feed your risk of depression relapse

When you fall into a depression for a second time, you know what to expect. You’ll have to start treatment again and talk to your doctors, among other things.

A study by Dr. Norman A. Farb conducted at the University of Toronto suggests that people’s thought patterns cause relapses. If you continue to play the victim, use an overly critical inner dialogue, and have a negative attitude, the risk for relapse is high.

It’s important to remember that these thought patterns are akin to rowing out to sea in a leaky boat. Negative thinking will drown you. It’s exhausting and it gets in the way of creative and useful thoughts that help you navigate through life. This kind of internal dialogue can even convince you that you don’t know how to swim. If you let it get that far, it can be very difficult to recover.

These cognitive symptoms usually have physical manifestations as well. You’ll feel listless and tired. You might have trouble sleeping or suffer from muscle pain.

When you have a depression relapse, you have to get professional help. Don’t pretend that everything is fine. If you’re broken inside, don’t smile as if nothing’s wrong. Maybe you go to bed every night hoping you’ll feel better in the morning. Although that hope might offer some relief, you won’t get better without help.

Many people deal with depression on their own. Others start psychological therapy but quit somewhere between the first and sixth months. That simply isn’t enough. If you truly want to face your depression and avoid relapse, then mindfulness-based cognitive therapy is one of the most effective options.

Several studies, such as the one from Dr. John D. Teasdale at Oxford University (and later at the MRC Cognition and Brain Sciences Unit), show the benefits of this type of therapy.

Even patients with multiple relapses show significant improvement with mindfulness-based therapy. Not only that, but they learn valuable strategies to reduce negative inner dialogue, control their thought patterns, and practice positive habits to prevent relapse. It’s possible to deal with these emotional and mental challenges. The first step is deciding that you want to get better. Although that requires grit, hard work, and determination, the results are worth it.

Women and Depression: Risk Factors
In this article, we're going to focus on a social aspect of depression: the way it's more likely to affect women and why exactly that is. Read on! Read more »
Link copied!
Interesting Articles
Clinical Psychology
The Trivialization of Mental Health Disorders