Causes and Treatment of Ailurophobia

Felines are controversial creatures. Some people love them, some hate them, and some even fear them. Ailurophobia, the fear of cats, may not be as common as the fear of dogs, but it's just as limiting in many instances. Continue reading to learn more about the characteristics of this fear and its possible causes! 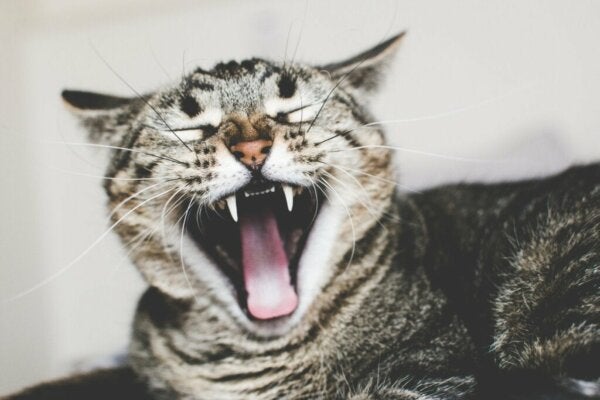 Many people suffer from ailurophobia. It could be due to the fact that cats are the protagonists of legends and even of terrifying stories, such as Edgar Allan Poe’s classic tale, The Black Cat. It’s true that these mysterious creatures are highly intelligent, curious, and agile. Nevertheless, this fear is real and rather limiting.

To talk about phobias is to delve into a world that’s as mundane as it is unique. In fact, this condition is one of the most common psychiatric disorders. It’s an irrational fear that may or may not hinder a person’s performance in their daily life. A clear difficulty in finding the origin of such fears is a characteristic that defines this condition.

In 1914, American psychologist G. Stanley Hall published his now-famous study on the genetics of fear in the American Journal of Psychology. In it, he identified 136 phobias. The list is much more extensive now. The reference of the study of ailurophobia or fear of cats was American neurologist Silas Weir Mitchell, who began to collect all possible information to better understand this type of phobia in 1902.

His research put into context the current knowledge on this condition.

“Cats don’t need to be possessed; they’re evil on their own.”

What’s ailurophobia? What causes it?

In 1791, a jury ruled that a cat was the culprit in the death of a baby in Plymouth, England. The judge ruled that the animal had “absorbed” the child’s breath, following the command of a witch. This era was defined by ignorance and fanaticism and people associated felines with evil.

Some people point out that irrational fears are often nourished by atavistic fears, so common since the beginning of time. Ailurophobia could be one of them, although it isn’t clear. However, neurologist Silas Weir Mitchell explained that this type of condition has some specific characteristics.

For starters, a person who irrationally fears cats doesn’t have the same reaction with all types of cats. In other words, they don’t seem to mind lynxes, tigers, lions, etc. They may go to zoos and even like these creatures. Still, they’re unable to come close to a domestic cat.

There are times when they may even panic when an animal isn’t even physically there but locked up in a room so as to keep it away from a phobic person.

How does this type of phobia manifest?

Phobias manifest in many ways and with various degrees of intensity. That is, not everyone who’s afraid of a cat will react the same way. However, these symptoms are common:

The origin of phobias is nonspecific. That is, it isn’t always easy to determine what causes or feeds them. However, you can consider the following triggers of ailurophobia.

Every phobia, whatever it may be, originates due to anxiety, a condition where irrational fears, distorted thoughts, uncontrolled emotions, and behavior beyond one’s control intermingle. Therefore, a person that’s too limited by ailurophobia must seek specialized help.

The coping strategy is usually based on the following techniques:

To conclude, this phobia may not be as common as the fear of dogs but can be quite debilitating. After all, cats are popular pets and freely roam around the streets. Thus, treating it is key to a better life.

Some Dreams Prepare You to Face Your Fears
Some dreams prepare you to confront your fears. Thus, the dream universe to which your brain takes you every night sometimes fulfills a therapeutic purpose. Read more »
Link copied!
Interesting Articles
Clinical Psychology
The Hamilton Anxiety Rating Scale