Are You Having a Panic Attack or an Anxiety Attack?

Today, we want to talk about the difference between a panic attack and an anxiety attack. The former is a colloquial term and has little clinical use, while the latter is a perfectly-identified clinical entity. 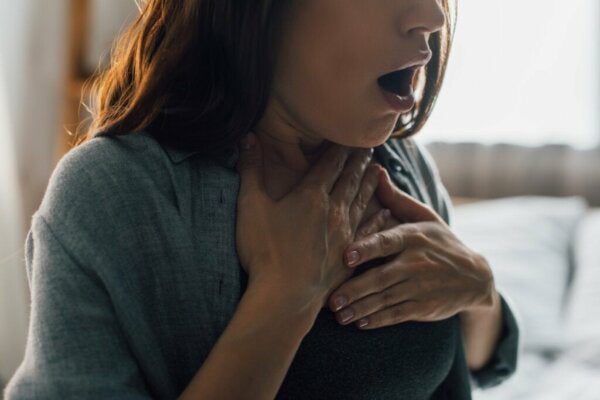 The terms panic attack and anxiety attack are often used interchangeably. However, they aren’t the same. In fact, some key characteristics set them apart in spite of the symptoms they have in common. No worries, it can be confusing. In fact, even psychology professionals often mistake the two terms.

However, not knowing the difference could make it difficult to find the right treatment or to develop useful coping skills. As you can see, these differences are more than just a matter of semantics.

One can address a patient’s case and the problems behind the attacks more effectively by understanding the symptoms of anxiety and panic attacks. The basic discomfort is quite different and so is its evolution. Thus, it’s essential to be able to tell them apart.

“Panic attacks are a lot like being drunk in some ways, you lose self-control. You cry for seemingly no reason. You deal with the hangover long into the next day.”

Is it a panic attack or an anxiety attack?

An anxiety attack often arises as a reaction to a stressor or a particular concern. For instance, you’ve been dreading a layoff for some time and your anxiety symptoms skyrocket when your boss calls you into their office.

People may be afraid and apprehensive during an anxiety attack. Their heart might be racing and they might also experience shortness of breath. However, it’s short-lived and disappears along with the stressor.

In contrast, a panic attack occurs when there’s no actual danger or apparent cause. There’s no trigger for it, so it’s quite unpredictable in many cases. A person who’s having a panic attack is usually overtaken by terror, fear, or apprehension.

They may feel like they’re going to die, lose control, or have a heart attack. Actually, they experience a range of physical symptoms that may include chest pain, shortness of breath, dizziness, or nausea.

Are these conditions included in the DSM?

“Anxiety attack” wasn’t included under any diagnostic category in the latest edition of the Diagnostic and Statistical Manual of Mental Disorders (DSM-5).

Symptoms of an anxiety attack

Here, anxiety reaches a peak that can last for a long period of time, either until the trigger disappears, the person experiencing it finds an alternative coping strategy, or it exhausts their physiological system.

It’s more serious than a simple sensation of anxiety but it doesn’t usually reach the activation levels triggered by a panic attack. It could last minutes, hours, days, or weeks. Usually, it manifests with one or more of the following symptoms:

Unlike these, anxiety attacks aren’t symptoms of an anxiety disorder. In fact, anxiety is a natural response to certain stimuli or situations and these kinds of attacks are just more intense forms of such an emotion.

Furthermore, anxiety attacks often lead to patterns of avoidance or excessive caution. For example, someone who’s experienced one due to social anxiety may avoid places or situations that made them anxious in the past.

Symptoms of a panic attack

This can trigger serious physical reactions. Many people who have one often think they’re having a heart attack. In fact, some even call 911 because they don’t know what’s happening. They usually have at least some of the following symptoms and these usually last about 10 to 15 minutes:

People often have a sense of immediate threat when they’re having a panic attack. Thus, they respond by asking for help or trying to escape from whatever situation they’re experiencing. Some people only have one or two panic attacks in their lives.

These usually occur under extreme amounts of stress or pressure. Also, repeated panic attacks are often a symptom of panic disorder. Certain traumatic events can eventually trigger panic disorders in a person.

How to tell them apart

The symptoms of an anxiety attack and a panic attack are quite similar. Thus, it can be hard to identify them correctly. These tips might help:

It’s key to know the difference between a panic attack and an anxiety attack because many patients believe they’re having one when they’re in fact experiencing the other. This confusion is the reason why many people don’t seek medical help.

In the worst-case scenario, a person could become dependent on medication they don’t need if the person making the differential diagnosis confuses the two conditions. For this reason, professionals must really understand the differences.

Why Anxiety Makes You Tired
When you're anxious, do you feel heavy and fatigued? What's going on here? In today's article, we'll address why anxiety makes you tired. Read more »
Link copied!
Interesting Articles
Clinical Psychology
Psychogerontology: History and Characteristics