The Cognitive Psychology of Religions

The cognitive psychology of religions describes the type of memory that each religion uses in order to make sense of the rituals and traditions it follows. Here's the psychology of the major religious groups around the world. 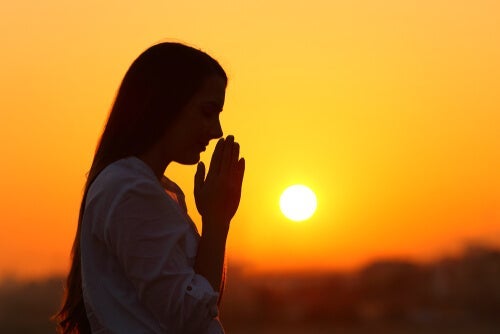 Religions can be very complex. Although they’ve been mostly studied from a sociology and anthropology standpoint, psychology has something to contribute to research as well. In fact, the cognitive psychology of religions gives some clues as to why humankind believes in certain religious principles.

Although many authors have discussed the “gaps” that religion seems to fill or its role in mental well-being, none of them seem to be exhaustive as to why religions exist. In other words, people don’t choose a religion to satisfy a need. Instead, religions satisfy different needs, even in different contexts.

Also, from a cognitive-psychology point of view, believing in religion depends more on basic mental processes. Specifically, it depends on memory. The way religions are passed on and practiced determines how people will remember them, and ultimately, it influences whether or not people accept its principles.

The two modes of religiosity

In general, all religions believe in deities, spirits, and/or ghosts, which are all supernatural beings. In fact, these beings are usually immortal, change people’s fates, or have the ability to see everything that happens around the world.

“All religion, however, is nothing but the fantastic reflection in men’s minds of those external forces which control their daily life, a reflection in which the terrestrial forces assume the form of supernatural forces.”

And, of course, supernatural beings don’t have human limitations. But the strangest thing is that people accept them only under a religious context. For example, many people who believe in a god would say that ghosts and fairies aren’t real. To understand how the human brain is able to accept religions’ beliefs, let’s turn to the theory of the two modes of religiosity.

According to this theory by Harvey Whitehouse, there are two modes of religiosity: the doctrinal mode and the imagistic mode. Every religion fits in either one of these two.

The doctrinal mode in the cognitive psychology of religions

The doctrinal mode requires constant communication and ritual repetition is common. For example, in Christianity, believers must take communion and go to mass at least once a week. While so much repetition can turn boring, it encourages implicit memory. This memory is the reason you never forget how to ride a bicycle: you learn and do things automatically, without really knowing how.

“Every formula of every religion has in this age of reason, to submit to the acid test of reason and universal justice if it is to ask for universal assent.”

Also, this type of memory reduces reflection and innovation. It promotes less critical thinking: people accept and justify the dogma “Because it’s always been that way”. However, not all knowledge is implicit. In fact, it’s also taught. For example, catechesis for Christianity.

This way, the doctrinal mode involves leaders imparting knowledge and establishing hierarchical power structures. To do that, you must add a lack of individual reflection and innovation, and you’re left with the unconditional acceptance of the religion’s principles.

The imagistic mode, unlike the doctrinal mode, holds rituals less frequently. For example, initiation rituals are held once in a lifetime. These types of rituals are associated with strong emotions, either negative or positive, and create strong cohesion among believers. Therefore, these religions usually form small communities, as they distrust people who haven’t partaken in the rituals.

This mode of religiosity uses episodic memory, which focuses on the details of specific events. It encourages spontaneous reflection by transforming information through metaphors and analogies. That way, there can be many interpretations, so there are usually no leaders.

In summary, the cognitive psychology of religions can explain why humans believe in supernatural beings. According to the doctrinal mode, a lack of criticism along with explicit and implicit memory can lead to accept their existence. Whereas in the imagistic mode, imagination that arises from episodic memory can lead to the same conclusion.