Can You Inherit Depression?

Some factors make people more prone to suffering from depression, like having been victims of bullying. In this article we'll explore whether genetics play a role in developing this mood disorder. 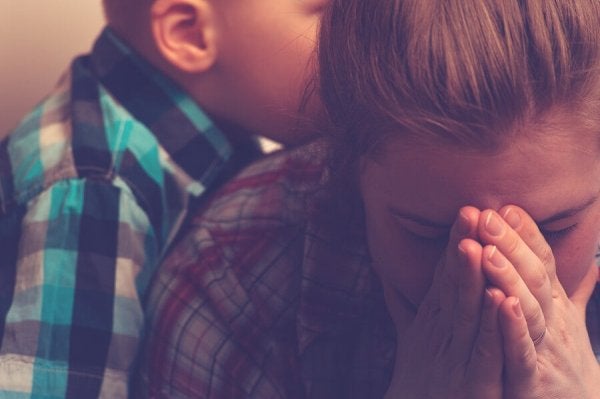 Depression is one of the most common mood disorders all over the world. It’s also one of the most-often treated problems in psychology and psychiatry clinics. It can affect people of any age. Also, its symptoms vary depending on the individual’s stage of development. Researchers have spent a lot of time studying the causes of depression, and scientists are particularly interested in looking at whether or not you can inherit depression.

This disorder can affect every aspect of a person’s life. In general, the consequences of depression are:

Experts continue to study the causes of depression in order to improve the effectiveness of treatment.

Can you inherit depression?

One common question people have about depression is if it can be inherited. Quite a few studies suggest that depression has a genetic component.

When psychologists and psychiatrists take their patient’s medical history, they find that a considerable portion of people with depression have a family history of depression or other cognitive disorders. However, that doesn’t necessarily mean that they’ve inherited the disorder. A number of other important factors play a role in a person developing depression or not. Social factors, psychological factors, and life experiences are all important to consider as well.

When these factors converge, it can make certain people much more prone to depression than others. With several factors at play, you’re much more likely to develop the disorder.

According to studies that look at the genetic components of depression, a series of specific genes play a role. However, these genes are also influenced by environmental factors.

Endogenous depression isn’t caused by external factors. Instead, internal and organic causes related to brain function are to blame. The genetic component of depression is easiest to analyze in endogenous cases.

If the individual with endogenous depression has a family history of this mood disorder, genetics might play a role. However, it still wouldn’t be a determining factor.

With depression, the physiological functioning of the brain has alterations in some of the neurotransmitters that are responsible for emotional regulation. An individual with these alterations doesn’t necessarily have to have a family history of depression.

According to available research on the subject, when you look at the general population of people with a history of depression in their immediate family, you see a greater prevalence of depression.

If the neurotransmitters that play a role in depression suffer alterations, people are more likely to negatively interpret the events around them. It can even affect the view they have of themselves.

Although it’s possible that people can inherit depression, there are many other possible causes to consider. Remember that your way of thinking, the way you interpret situations, your beliefs (about yourself and the world), etc. are learned.

The environment where you grow and develop directly influences the way you see the world. For example, if one of your close family members tends to see the world in a negative way, that way of thinking will be normal for you, and you’re more likely to repeat it. That can make you more prone to developing depression.

Can you inherit depression?

The bottom line is that genetics can play a role in developing depression, but they’re not the only factor. As you can see, the interaction between different elements is what triggers this complex disorder.

Stressful life events such as the death of a loved one, separation, divorce, loss, and significant changes are also risk factors that can trigger depression.

Studies show that the risk factors we’ve mentioned can increase an individual’s genetic risk. Consequently, the interaction between all of the different factors is what can trigger depression.

Researchers that are studying whether or not depression is hereditary have studied families, twins, and adopted children. They try to look at all the possible perspectives to find out if biological heredity could be a factor that predisposes people to depression or not.

Today, all of the studies seem to arrive at the same conclusion, and what seems the most scientifically likely is that depression isn’t necessarily hereditary. However, the genetic component has a certain influence that’s important to keep in mind.

In mental disorders, there are always multiple etiological and causal factors at play. It’s important to keep this in mind, especially when it comes to figuring out what’s the best treatment.

Diagnosed with Depression – What Happens Next?
According to the WHO, more and more people are being diagnosed with depression every day. So, you probably know at least one depressed person. Read more »
Link copied!
Interesting Articles
Clinical Psychology
Oppositional Defiant Disorder: Symptoms, Causes, and Treatment