In this article, you’ll learn all about the somatic nervous system! 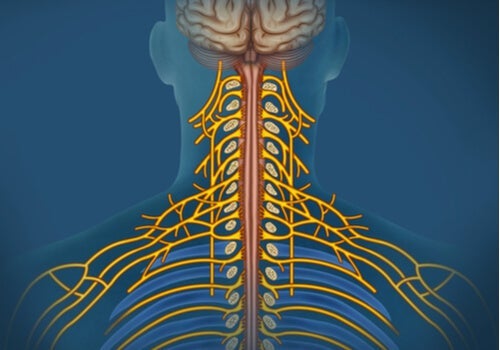 The SNS also acts through the skeletal muscles. It regulates voluntary and reflex actions. Through its receptors, this system perceives the changes that are produced. That’s why motor fibers located in the somatic nervous system have some characteristics that are different from those of the autonomic nervous system:

The SNS can stimulate or not stimulate the effector, but it also doesn’t inhibit it.

In order for a sensory stimulus to arrive at its destination, which is the central nervous system, it must go from the receptors to the central nervous system. It does this through a connection with three neurons. In the somatosensory cortex, there’s also a proportional representation to the sensitivity of the different parts of the body (1). In this representation, not all of the areas are of the same size. Areas such as the fingertips and the lips take up the most space in this representation.

There are various types of sensory pathways. According to the modality of the senses that they drive, experts divide them into the following groups:

Another way of naming them is also according to the source of the stimulus:

In order to transmit the sensation, the nervous impulses travel through three neural relays:

Before reaching the cortex, where the sensation is interpreted, the thalamus processes all sensory information (except for olfactory inputs). Afterwards, they’re integrated into the parietal cortex, where sensitivity is normally integrated.

When you stretch out your hand to take something, this mental process requires the contraction and relaxation of muscles. In this case, it involves the muscles of the arm as well as the hand.

Motor pathways are also involved in these movements. They relay nervous impulses from the central nervous system all the way to the skeletal muscles (somatic effectors). The body uses motor neurons to carry this process out. These are located in the anterior horn of the spinal marrow.

Experts divide the motor tract system into three bundles depending on the origin and endpoint of the nerves:

Therefore, the somatic nervous system is also a complex system. In order to produce movement from the central nervous system, it has to make various connections. The same also happens when someone touches you or you brush against an object, as a multitude of neurons and areas need to work together.

The Neurobiology of Intuition or Your Gut Feelings
In this article, we're going to tell you about the research being done on the neurobiology of intuition. It isn't pseudoscience! Read on to learn why. Read more »
Link copied!
Interesting Articles
Brain
Happiness is Located in Your Left Brain Hemisphere

Contrary to popular belief, our feelings and emotions don't reside in our heart but in our brain. Recent studies show…