There's a wide range of depressive disorders one can categorize as mood disorders. The various types of depression include dysthymia and premenstrual dysphoric disorder. Generally, the differential diagnosis is the first step in designing an appropriate intervention. 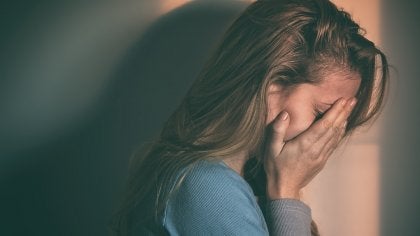 Although most of us think only of depression, there are many other mood disorders. In this article, we’ll try to differentiate and deepen on some that we often forget: mood disorders other than those that involve major depression. (The only ones the general public usually hears about).

According to the data, one in five people – 10 to 16 percent of the general population – will suffer from depressive or mood disorders during their lifetime. Almost 4% of these people will live with the disorder throughout their lives. This phenomenon is known as dysthymia and we’ll discuss it below.

Differences are also identified based on vender variables. Two women suffer from a depressive disorder for every man. Regarding population groups with a high incidence of mood disorders, we can find caregivers and abuse victims.

Depressive disorders can manifest at any time throughout our life. In fact, there are several childhood depressive disorders. However, the prevalence is mainly centered between the ages of 25 and 45. The onset, however, is approximately 20 or 25 years old in the young adult population.

The duration of a depressive disorder may vary depending on the person and their eenvironment. Some mood disorders last for years while others may manifest spontaneously.

The basic characteristic of a major depression episode lies in the existence of a period of at least two consecutive weeks in which the person presents a depressed mood, lack of interest, and little pleasure in their normal day-to-day activities. It can manifest through feelings of sadness, irritability, anger, etc.

Thus, you must suffer from five or more symptoms from the following list in order to be diagnosed with major depression:

Major depression disorder is one of the most widespread mood disorders. This type of depression picks up virtually all the symptoms of a major depressive episode, however, times are changing. The duration of certain symptoms or characteristics of the disorder is highly relevant in psychology since time can make a difference between one or other diagnosis.

Therefore, a person with major depression is not someone with depressive symptoms 365 days a year. They’re intervals between which there are moments where those symptoms don’t manifest. So, it’s not a continuum. This type of depression may have a seasonal pattern, so we know it as a seasonal affective disorder. This means there are specific major depressions associated with seasonal changes, where the fall and winter months have a very large impact on mood.

Dysthymia – The depression that persists

We can define dysthymia or persistent depressive disorder as a chronic pattern of behavioral disturbances, characterized by a low mood. This mood is continuous, every day and has a minimum duration of two years.

To diagnose dysthymia, a person must live most of their days with an unbalanced or depressed mood and not lack these symptoms for more than a month. This means that depressive symptoms and low mood aren’t seasonal such as those of major depressive disorder.

This condition is included in mood disorders due to the danger of misdiagnosis. One of the reasons for this inclusion is to avoid the potential danger of high rates of children diagnosed and mistakenly treated for bipolar disorders. This mood disorder has to be diagnosed between the ages of 6 to 18, neither before nor after. The symptoms begin to manifest before a child is 10 years old.

Destructive mood dysregulation disorder refers to severe and recurrent anger outbursts that manifest verbally or behaviorally. The intensity and duration of these outbursts aren’t proportional to the situation or provocation and don’t match a person’s degree of development. They act as if they were smaller, with lower levels of emotional management.

The main problem raised by this controversial disorder is related to the establishment of a clear differential diagnosis. There are too many disorders with which it shares many symptoms, and therefore they get confusing.

This is a variety of emotional and behavioral alterations that may manifest in some people in association with their menstrual cycle. The symptoms of premenstrual dysphoric disorder are:

There are also secondary symptoms such as lethargy, decreased interest, or hypersomnia or insomnia. These symptoms must manifest in the vast majority of menstrual cycles and they disappear one week after menstruation. They usually start a few days after the onset of menstruation.

Mood disorders are heterogeneous and not only a matter of people who are “sad”. Although they’re similar, they’re different conditions that can lead to entirely different pain and, above all, to varied treatments.

It’s vitally important to be able to differentiate them to specify the intervention and cut off their progress. Making sure, for example, that a major depressive disorder doesn’t become dysthymia begins with a good diagnosis that meets the demands of each person and the specific discomfort that afflicts them.

What Factors Influence Our Mood?
Mood is the sentimental tone that a person experiences internally, be it pleasant or unpleasant. In this article we ask ourselves what factors influence it. Read more »
Link copied!
Interesting Articles
Clinical Psychology
Behavioral Therapy to Treat Generalized Anxiety Disorder (GAD)

Clinical Psychology
Pure O: What Is It and How Can You Combat It?