Jane Elliott's Blue Eyes and Brown Eyes experiment was a turning point in social psychology. In this article, we'll explain what happened during the experiment and discuss its consequences. 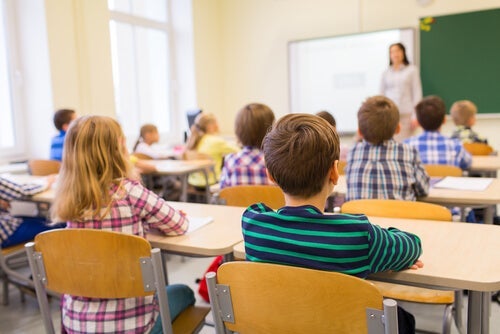 Immediately after the assassination of Martin Luther King Jr.,  Professor Jane Elliott used the minimal group paradigm to perform an experiment that would teach her students about race discrimination. The minimal group paradigm has shaped an entire methodology in social psychology. Basically, you establish differences between a set of subjects in order to divide them into separate groups. This technique allows researchers to show how many different traits are necessary to create defined groups, and then analyze the subjects’ behavior within their groups.

In the 60s, the United States was in the midst of a social race crisis. Professor Jane Elliott performed a group experiment with her students that they would never forget. The idea was simple but profound. She wanted to show her students that an arbitrarily established difference could separate them and pit them against each other.

Jane Elliott, a teacher and anti-racism activist, performed a direct experiment with the students in her classroom. She told them that people with brown eyes were better than people with blue eyes. She also made the brown-eyed students put construction paper armbands on the blue-eyed students.

With a couple of basic and arbitrary examples, Elliott made the case that brown-eyed people were better. The students were surprised, but they didn’t argue. This way, she successfully created two distinct groups in her classroom:

The consequences of the minimal group became evident very quickly. A difference as simple as eye color, defined and established by the authority figure, created a rift between the students.

The Results of the Experiment

The arbitrary division among the students intensified over the course of the experiment, so much so that it actually ended in physical violence. Children often fight, argue, and sometimes hit each other, but this time they were motivated by eye color. The second day, Elliott reversed the groups. She told the students that the brown-eyed children were inferior and repeated the experiment. The results were the same.

From the Classroom to the Real World

When you read about this experiment, it’s hard not to question labels. If this arbitrary division that Elliott enforced for a few hours created so many problems in this classroom, what’s happening on a larger scale? Considering all the stereotypes and prejudices that exist, what kind of damage is being done?

It’s not surprising to anyone that some social groups discriminate against others due to ethnicity, religion, or culture. These differences lead to war and hate. Even family members can turn against each other if some authority suddenly decides that those differences are a problem.

“I felt like quitting school. I felt mad. That’s what it feels like when you’re discriminated against.”

-A child participant in the Blue Eyes-Brown Eyes experiment-

A Question of Upbringing

Jane Elliott has done a lot of reflection about the consequences of the minimal group experiment. She says that it’s shocking how children who’re normally kind, cooperative, and friendly with each other suddenly become arrogant, discriminatory, and hostile when they belong to a “superior” group.

The hate and discrimination that we see in adults have their origin in their upbringing. Society made them believe they were better than other people for arbitrary reasons such as skin color or gender.

This paradigm helps understand the current problems related to discrimination. Today, increased migration means more opportunities for people from different backgrounds to interact with each other, which is often a source of conflict.

The people and cultures already present in a place often feel threatened by new immigrants. Their response is to create dichotomies of inferiority and superiority. As a result of those divisions, you see racial discrimination or even terrorism.

The Importance of Discrimination-Free Education

The goal of the minimal group paradigm is to establish subjective differences and create a climate of favoritism. Thus, the dominant group, supported by the authorities, will always have the upper hand. This procedure is sometimes so subtle that no one notices it happening. Some guidelines for avoiding or reducing this effect are:

In conclusion, Jane Elliott’s experiment demonstrates the fragility of coexistence and cooperation. It also shows how arbitrary and subjective things can turn friends, family members, and citizens against each other.

“Charity is humiliating because it’s exercised vertically and from above; solidarity is horizontal and implies mutual respect.”