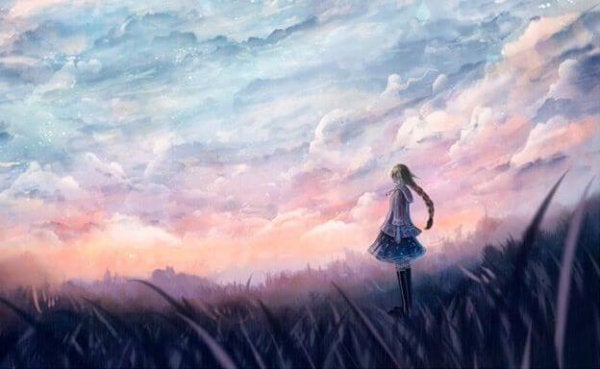 Are you a normally quiet and reserved person? Perhaps you openly show yourself to others, but it’s just a simple appearance. When facing something important you put up a wall.

There are many people who prefer to listen rather than speak. They seem timid, but are not. They are very friendly people who attract you by the confidence they give you, but hide something deep inside them. Something that hurts, something that only they suffer in silence.

Sometimes, to say it all… silence is enough.

Maybe you’ve met someone who meets these characteristics, or perhaps you yourself are one of them. It is difficult to realize or be aware of them as they go completely unnoticed.

If you are one of these people who has something to hide behind your apparent silence, you may have noticed how easy it is to go unnoticed. People are fixated on those who attract attention, people who show their strong personality, who stand out from the others. You, however, are a person who knows that you can pretend very well because nobody will notice. Nobody pays attention to you.

This does not mean that you aren’t important to anyone. You know very well that is not so. But others are not sensitive enough to open their eyes and see beyond that simple façade you put up.

A smile can make everyone believe you’re happy and everything is going really well. But believe me, someone will not believe that smile that contrasts with your eyes even for a minute.

We believe that no one is watching, that everyone is keeping their eyes closed, until we realize that someone is watching us silently by reading us.

Perhaps you’ve met someone who has approached you, suspicious that something is wrong. It may be a close relative, a friend or someone (teacher, neighbor) with high sensitivity.

If you do not confide enough in this person or do not concern them very much, then they will accept your “I’m fine”, “There’s nothing wrong“, “It’s stress,” and leave. Of course, this is all while knowing that this is not true.

Take out all the garbage you have inside

Some people are like hoarders in their emotional lives. They accumulate emotional garbage and negative things until that moment when they finally explode. Each of us is different. As much as we try not repress emotions, if it’s in our nature, we will. Of course we can strive to do the opposite, but only by making a real effort, even though it is difficult.

We should do the same with the silence that many people suffer from. As kind as the others may be and as much trust as they have, it is difficult for them to let go of everything they have inside. Why is it so difficult to say what happens to them? Why, if you’re one of these people, it is an “I want to, but I can’t”?

It’s not that what they have to say is something serious, but sometimes they just don’t know how to express themselves. There are very emotional people, who feel a lot and expressing everything is almost impossible.

It’s not the same to experience or live a situation as it is to tell about it. It’s not that this is something that they can’t say or something that will make them look bad. It’s just not knowing how to start and maybe the story is just very, very long to tell.

Let’s remember that people who are like that keep things from a long time ago for themselves. This implies that have been through a lot, without being aware of it.

“I would like to tell you everything, to be sincere with you, but I fear you’ll look at me as if I were crazy and I am not going to allow myself to feel vulnerable again in front of anybody”

Being vulnerable is something that these people are afraid of because they have previously confided in someone and did not feel understood, and many people even thought they weren’t right in the head.

All this goes through the mind of people who suffer behind silence. They are vulnerable and carry loads heavier than any of us could endure.

It is important if you are one of these people, to learn to take all that you have in one way or another; either gradually if necessary or abruptly if you need to that way. But, take it out. As a friend of mine once said, “If you don’t take it out, the end it will begin to fester.”

Accumulating Silences Also Has A Price

Sometimes silence, as a response, is usually interpreted as contempt. If we think of the traditional saying: “there is no greater contempt than not giving… More»

Personal Development
How Anxiety Affects Your Relationships with Others

Anxiety affects you in certain settings and can make you feel uneasy, even if there's nothing to feel anxious about.…

Wellness
True Love: Known for What it Offers, Not What it Demands

Love is not control, nor demand. Love is freedom and trust. However, emotional slavery is much more common than we would like…

Wellness
The Wounds of Authoritarianism Take the Longest to Heal

The humiliation, aggression, and domination... The wounds of authoritarianism heal very slowly, and they leave scars that may stay with…