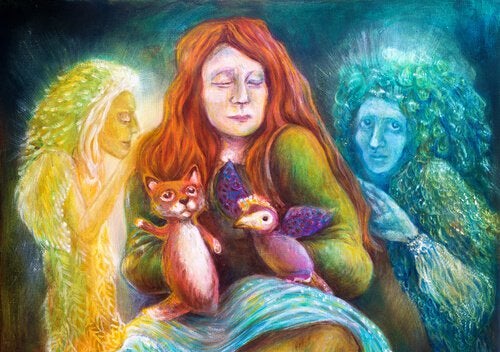 Have you ever been told that you’re more mature than others your age? Or have you been told the complete opposite? You might have heard talk about “old souls” or “young souls.” This is a way of describing someone’s age, not in terms of the number of years, but according to their intelligence, sensibility, intuition or how well they seem to “fit” in the period in which they live.

Of the two concepts, the most striking one is by far the “old souls.” The origin of this expression comes from the religion of Taoism (which is over 5000 years old and originally from China). According to their beliefs, the souls leave the Taos, the global and natural unit, and acquire diverse experiences.

The Taoists believe that everything should return to its roots. So, the final goal of the soul is to make a new journey to the Tao. But, only once it’s obtained all of the knowledge and developments life has to offer. The souls undergo five lifetimes and reach perfection at the end of the fifth.

Then, the person has higher levels of perception, but also stands out from their peers because they’re more spiritual. They’re busy trying to find “their place in the world.” They believe they’re a part of something bigger. That their main goal is to reach inner peace.

Taoists believe that many philosophers, scientists and artists are old souls that simply feel more at ease in these professions. It’s noteworthy that people with these souls like to learn hands on. They tend to challenge the way things are and they base their beliefs on their own experiences.

Besides having the previously mentioned traits, an “old soul” also has the following characteristics:

A high level of maturity

Even as kids, it’s obvious that they don’t fit into the world of children. They’re bored with the usual games for their age and want more complex books because fairy tales are too basic. They have the attitudes of an older person. They can draw conclusions even beyond their parents. They can do all of this due to a higher degree of reasoning than what’s considered “normal.”

They prefer to be alone and enjoy anything to do with introspection.

Old souls don’t need to have company, because their inner world is enough. They tend to use their free time to meditate, dig further into their feelings, and read about “deep” topics. They are very quiet and introverted. Many call them shy, but they’re actually just absorbed with their inner self.

They appreciate the simple things

Old souls have a very strong spirituality. They are moved only by things they are passionate about. They choose to work on things that make them happy and let them fulfill themselves. They try their hardest to master something. But when they do, instead of continuing with it, they move on to another activity. Why? Because they find more pleasure in the journey than in the finish line.

They have a very highly developed instinct

Not just that, but they allow it to guide them. It’s usually never wrong! This kind of person pays attention to every detail and has the ability to form complete pictures in their minds. When everyone around them sees a forest full of trees, they see every plant and animal species, the sky, ground, wind, and more. Nothing goes unnoticed by these “old souls.” They can analyze every person and situation to a detailed extent, without fail.

They are very sensitive

They have a great sense of empathy, and can put themselves in others’ shoes, understand and help them. This is due to the fact that they understand, better than anyone, what is going on. They see beyond their successes. They know how others think. They have the ability to forgive, let go of their mistakes and give advice without passing judgment.

To conclude, we should note a few potential disadvantages of having an old soul:

Do you know any “old souls” or do you consider yourself one?

Link copied!
Interesting Articles
Stories and Reflections
Surrender: A Story about the Power of the Mind