7 Myths About Depression You Didn't Know 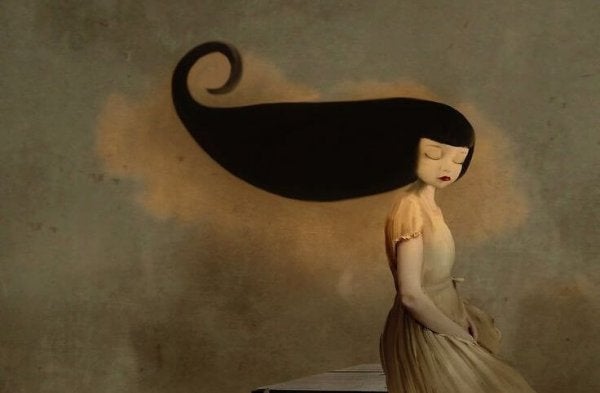 Depression is a sickness that affects a great number of people in the world. Despite being a relatively common malady of the modern world, there are still certain myths about depression that should be dismantled.

Depression claims many lives. Suicide rates have gone up, especially after financial crises and the realities of the economy and unemployment.

Many times, depression is considered to be a state of unhappiness. Today, we will discuss seven myths about depression. These myths are deeply rooted in society; so much so that we may not even be aware of them.

1. Depression is the same as sadness

The first of these myths about depression is often passed off as common knowledge. When we say that a person is suffering from depression, we immediately think that they are a very sad person. However, this is not necessarily true.

We all feel sadness in certain moments, but there is a whole world between sadness and depression. Sadness is passing, impermanent. Sooner or later, our emotion will change.

With depression, however, it is very different. It is not something that passes, it is something that remains, along with many other things: apathy, emptiness, pain… Depression does not come alone, but rather accompanied by many other negative feelings that cause the sufferers whole life to become gray and lonely.

2. If I suffer from depression, I am weak

Just because a person suffers from depression does not mean they are weak. When this illness affects them, they may be seen by others as someone incapable of confronting difficulties, incapable of taking on the challenges life brings. Depression is a psychological problem that can turn a person’s life upside down. It has psychological, biological, and social implications.

However, suffering from depression does not imply weakness. It is not a choice! A depressed person does not have a weak mind. This myth causes those who suffer from depression to isolate themselves and suffer their pain in silence, in turn increasing that suffering.

3. Depression does not effect children or adolescents

The degree to which depression can affect a child or adolescent is not fully understood. For example, it is not yet known if they are capable of feeling depression to the same degree or intensity as adults. What is known is that an adolescent who takes his own life is not the first to do so, nor is it done as a result of a simple moment of sadness but rather due to an extremely difficult phase of depression.

4. Depression goes away with time

5. This illness is just in your head

Depression, far from what may be the common belief, does not only affect the mind, but also the body in general. Insomnia, fatigue, chronic muscle aches and pains, and headaches are just some of the potential somatic symptoms. This is one of the most serious myths and misunderstandings about depression. To believe that it only exists in the mind is a serious mistake. Depression reaches beyond the mind.

“And this is how I am, in one moment or another, without the least bit of warning, I often fall into the emptiness of depression.”

One of the most entrenched myths about depression is that it does not affect men. However, this myth has absolutely no basis. Depression equally affects men and women. It is not an illness more common or only experienced by women. This myth is also linked to that about weakness mentioned above.

Statistically, more women do suffer from depression than men, however this does not mean that men don’t suffer. In fact, depression in men is actually more dangerous. Men tend to hide their depression more effectively. More often than not, it is only discovered that a man suffered depression when it is too late to save him.

7. Talking about it makes it worse

One of the most widely spread myths about depression is that talking about it makes the sufferer feel even worse. If we consider it to be a “taboo” topic of conversation, of course we will avoid bringing it up. However, someone suffering from depression needs to talk.

This is why psychologists play such an important role. This is especially important if their own family and friends completely avoid the topic. It can be something that feels shameful, something that shouldn’t be happening. It can feel like talking about it makes it worse. However, this couldn’t be farther from the truth. Showing interest in the person who is suffering depression will allow you to support them and understand some of their enigmatic, taciturn behaviors a little better.

“In your life, there will be at least on moment in which you will destroy yourself completely. And when that moment comes, you will move on from it.”

Do you know any myths about depression that are not listed here? If so, share them with us. Now is the time to bury all of the lies we believe to be true when it comes to this common, but misunderstood, illness.

Link copied!
Interesting Articles
Psychology
If We Dwell in Our Negative Experiences, They Will Have Greater Strength

Social networks like Facebook can provide many benefits and can be a source of growth if they're based on healthy relationships,…

Language is a fundamental part of understanding life and communicating with the world. It will have an effect on your emotions…