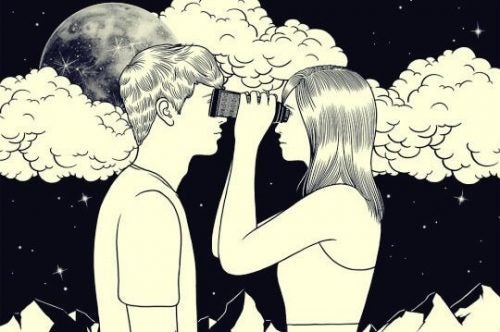 Giorgio Nardone is considered one of the fathers of Brief Strategic Therapy. This psychotherapist has written a number of books in which he addresses complex issues like eating disorders, fear, and important findings in psychology. To get a better understanding of his ideas, we will look at five Giorgio Nardone quotes taken from one of his books. The book is in Spanish and is called Los errores de las mujeres en el amor (Mistakes Women Make in Love).

In this book, Nardone proposes 17 different ways that women interpret love. They have funny names, like “The Fairy”, “Sleeping Beauty”, or “Frog-kisser”. It’s easy to identify with these scenarios. They describe the way we learn to relate to each other that is normalized by society.

1. Every stimulus needs a change

“If reocurring, even the most exciting stimulus becomes less effective in virtue of our perceptive and physiological adaptation. For attraction to remain alive, it needs constant change.” [translation]

This first Nardone quote busts open one common belief about romantic love: that passion will never die. This isn’t true. Without change, the attraction will fade and die, like the flame of a candle. Nardone proposes two options to resolve this problem:

“In the beginning of a relationship we only see in the other person what we want to see. Love is the most sublime deceit. When this initial impulse of the relationship loses strength, disappointment is inevitable.”

When you’re falling in love, you idealize the other person. The expectations that you have about that make it possible to ignore what you don’t like. However, the beginning stages of a relationship will always end. When they do, this “ideal partner” will fall off their pedestal.

That’s when you’ll be surprised by the person in front of you. You’ll become annoyed by the things you used to tolerate. This disappointment can be such a heavy blow that the relationship can start to decline steadily. For that reason, it’s important to be aware of this self-deception and work hard to identify it before you fall into its trap.

3. Selfishness in a relationship

“To sustain itself, a relationship has to satisfy every need and desire. In a romantic relationship, the selfishness of each individual has to coincide with the other. If they don’t, the relationship won’t work.”

This third quote from Giorgio Nardone allows us to reflect on the selfishness inherent in a relationship. Think of it as the needs and desires that you expect the other person to satisfy.

For example, imagine that your idea of a couple is two people who are affectionate with each other. In addition, it’s something that makes you feel good. You give affection and you expect affection in return. But then imagine that your partner is cold, distant, and uninclined to show much affection.

In this case, the “selfishness” of each partner doesn’t coincide with the other. As a result, over time it will become obvious that the couple can’t move forward. The reason is that conflict will come up and each partner will demand things that the other can’t give.

“That one person complements the other in a relationship is not a good thing. What’s more, most of the time if someone “complements” someone else in a relationship, it’s because there are dysfunctional elements in the interaction between two people who feed off of each other.”

The fact that these two people complement each other doesn’t mean it’s necessarily healthy. An emotionally dependent person can be attracted to someone with an avoidant personality (the coyote and the roadrunner). As you can see, there are “complementary” couples that are clearly dysfunctional.

5. The couple should adapt

“A relationship is a living system. In order to maintain equilibrium, both partners have to learn to adapt. They must evolve together with the changes that time will inevitably bring.”

This last Giorgio Nardone quote tells you that a couple must change over time. This isn’t negative at all. It’s actually quite the contrary. Knowing how to adapt to change is a sign that the couple is capable of success.

Nevertheless, there are always problems. Lack of passion, routine, children… All of that can cause a relationship to wear out. That being said, it isn’t the end if the couple knows how to adapt and find solutions. If they can’t, and instead start blaming each other, they’re doomed to fail.

Each one of these Giorgio Nardone quotes helps us see love in a relationship differently. It stresses the things every relationship has to go through. Which of these quotes will you remember from this article? Is there one that resonates with you in a special way?

5 Quotes By Mariela Michelena About Relationships
Mariela Michelena is a psychoanalyst specializing in relationships. In her books, she talks about how people live in a place of emotional dependency. Read more »
Link copied!
Interesting Articles
Wellness
Loving and Being Loved: Emotional Footprints

In today’s society, there is a very widespread idea that trauma is the only thing that leaves its mark on…

Wellness
To Every Brave Woman

To you, brave woman, fighter who struggles every day to wear your smile like a flag. To you, woman whose eyes are the color of strength, the eyes with which you transmit…

Wellness
Emotional and Rational Empathy: How Do They Manifest Themselves in Our Brains?

Wellness
10 Quotes for Starting Over

Time and again life returns us to the seashore, where the only thing that there is is confusion. When we move forward in one task and we realize that it…

Wellness
7 Ways To Get Along Better With Your Ex

Whether or not you want to get along better with your ex is a very personal matter. However, maintaining a…