Fear of conflicts: when fear stops us from defending ourselves 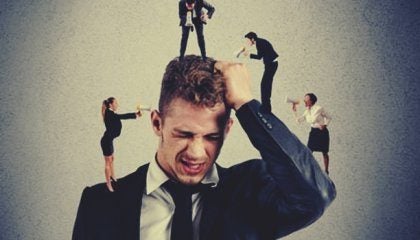 People with a fear of conflicts choose to remain silent, and takes the “it is best that I let it pass” attitude in order to avoid confrontation, and live in peace. However, resistance and avoidance of confrontation put them in a situation where discomfort, frustration and, above all, loss of dignity accumulate.

Fears, therefore, fulfill an evolutionary function: they help us survive and react better to dangers. The real problem with our modern life is that we no longer face predators that threaten our survival because the threats have ceased to be physical and are almost exclusively phobias. Those that, whether we like it or not, limit our growth, social and emotional stability.

People with fear of conflicts fill psychologists’ consultations. This data may surprise many, but it is a reality. Therefore, dynamics and discourses on their profile are based almost exclusively on “I better not do or say this so they don’t get angry”; “I won’t tell you this because it may hurt you”, or “I don’t know how to tell this person that what he has done does not seem right to me.”

Living in the border of permanent insecurity is not life. Living under the mantle of injustice for your non-action is not healthy. Being able to react to what we dislike and being able to defend our rights are the principles of well-being and good health. Facing conflicts and managing them effectively will help us grow.

A person with fear of conflicts fills the world with their anger and frustrations little by little and in silence. They do it by swallowing the pain, by giving in and letting this happen. Until in the end, it’s too late: that balloon ends up bursting in your own hands.

People with a fear of conflicts: What is behind that fear?

We could say that a timely withdrawal avoids conflict. We all know and see that it brings about good results. However, persistent withdrawal is not a proper response for most situations. This is true when there are injustices, and when it now touches on our ability to defend ourselves. Continuous use of avoidance will slowly put us in a cycle of suffering and inside a nasty protective barrier.

Almost without realizing it, we will end up accepting undesirable situations. We give them the power over us and let our personal boundaries dissolve like sugar in a cup of coffee. People with fear of conflicts have clinical or health problems. They seek professional help on these problems. They end up developing somatic disorders due to frustration (muscular pains, digestive problems, ulcers or cold sores). Without saying, developing mental problems such as anxiety disorders.

It is not always easy to make a profile for each individual on the cause of their fear of conflicts. However, they have some common features, and we will discuss them.

It is important to change our view about conflicts

It is enough to say aloud the word “conflict” to visualize a battlefield. A hostile environment where words fly and stick; where disagreements become insult; where differences make wide distances; and, where we may end up losing everything. It’s important to take a turn, to change the chip, to create a new perspective on the concept.

People with allodoxaphobia must understand several things. First, that these situations can bring us positive results. When we resolve conflicts, it affects our identity and self-esteem. We improve relationships and those social situations where we move daily. Remember that conflicts may appear in almost any situation: with our partner, with our children, with a co-worker…

By settling with passivity or in the idea of brushing aside our social role, therefore, we are required to know how to agree with each other, to dialogue, to solve problems, to negotiate to satisfy our own needs. Doing this is not bad, but getting it requires work, perseverance and adequate training in social skills, anger management and self-awareness. Let’s resolve our problems and face life to achieve well-being.

Balanced Thinking: a Perspective in Harmony with the World

Conflicts
Why Can't I be Happy for Others?

It's normal to be envious, indifferent, or even to really dislike that others are doing fine. However, sometimes you might…