How Can a Child Survive in a Dysfunctional Family? 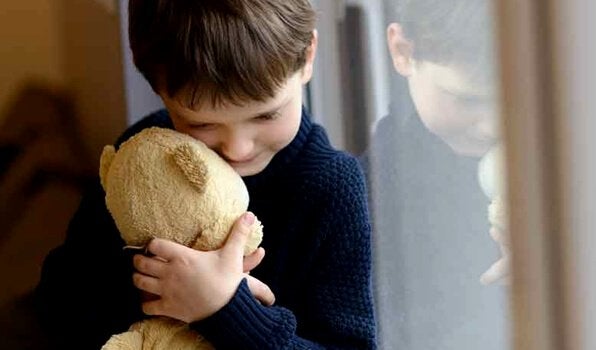 Growing up in a dysfunctional family can leave wounds with serious consequences for later life. However, these types of families are much more common than we think. Emotional manipulation, humiliating behavior, lack of empathy and sensitivity, communication problems, and dependency. All of these are characteristics that point to a dysfunctional family.

Children, when growing up in a home like this, have to adapt to survive. They do so to protect themselves from an environment which is far from ideal. In addition, they are observing dysfunctional behavior patterns that they will probably imitate when they are adults.

The family environment can either facilitate or hinder the psychological development of children, that’s why it is so important

As we have said before, it is common to find dysfunctional families. Therefore, it is also quite normal that children have had to learn to adopt different roles. These roles either allow them to protect themselves or to submit to the things going on around them. There are 5 types of roles that children can play out. Their choice will depend on the personality of the child and the type of dysfunctional family he or she grows up in.

The rebellious child – a child with behavioral problems who rebels against any type of authority. This child has probably grown up in a home where their parents separated or where there was abuse.

The culprit – a child who has always been blamed and who continually carries that feeling of guilt with them. This child has a negative concept of themselves and has never been valued by their parents.

The small adult – this child has adopted the role of their parents. They mature at an early age and don’t live a normal childhood. Generally, their parents are emotionally immature and unable to take charge of their lives.

The unworthy child – a child whose needs are ignored and who has learned to suppress their emotions. As a consequence they are usually shy and quiet. Their parents don’t pay them much attention, as they are probably immersed in their relationship problems. They believe that they are not worthy of love.

The manipulator –this child learns that they can’t get what they want with manipulation. Most likely, they have parents who don’t know how to set limits and who are not very interested in them either. They prefer to give them a video game or sweets just so that they’ll leave them in peace.

Growing up in a dysfunctional family

Parents often say that they have difficult or rebellious children who drive them mad. What they don’t realize, though, is that this is a demand for affection, attention, and appreciation.

Perhaps some of us can identify with some of these roles. Maybe we unconsciously adopted them when we were still very young and when we still didn’t understand life or relationships. Each of these roles develops according to how our family behaves around us, and how they make us feel.

In a dysfunctional family, the parents often point the finger at the youngest children, and classify them as problematic. They complain that they are selfish. However, the truth of the matter is that the problem always starts with the parents. These adults haven’t learned, or been taught, how to relate to others in a healthy way.

The children start to learn dysfunctional patterns of behavior that they will reproduce in a not too distant future. Let’s take the example of a child who grows up in a dysfunctional family where there is abuse and dependency. Their parents are immersed in their own problems and they don’t receive any attention from them, and they even feel guilty. This child is likely to acquire the “role” of not being worthy.

Consequences for the future

In the future, what type of relationships can they expect to have? Most probably they will be relationships in which they will suffer, because they will feel that they don’t have a choice. Even if they end up with someone who mistreats them too, it is likely that they will end up putting up with this bad treatment, because they learned that this is the normal way to relate to people.

And then what about their relationships at work or their friendships? Their lack of self-esteem and their constant feelings of guilt will make them feel responsible for their own failures, and also those of others. That’s why they’ll likely tend to become a perfectionist.

The family is the environment where children grow up, and it is where they have to learn how to relate to others. If we aren’t bothered about improving our relationships, solving the communication problems that may exist or giving a better example to the youngest members of the household, then what are we doing? We’re perpetuating harmful behavior patterns that will cause them much suffering.

Even though many of us may have grown up in a dysfunctional family, in adult life we ​​are the leading players in our lives, and we can heal all those childhood wounds and change the course of our lives.

Depression is a common ailment that affects many people. It is a silent problem that we often fail to identify because it does not manifest…

Psychotherapy supervision is essential for psychology students who are doing their internships, as well as professionals who are just starting…

Psychology
4 Signs You're Dealing with a Narcissist

Narcissism is a personality trait that feeds on the constant need for admiration, a feeling of grandeur, and the inability…

Psychology
The Surprising Letter a Mother Found in her Teenager's Drawer

Yes, during some of my tantrums, I am typical. The typical teenager. I am fifteen years old, and I keep…