Why Does Sorrow Last So Long?

There are times in life when sadness seems to permeate everything. Sometimes, the feelings last weeks or even months. Why is sadness so persistent? 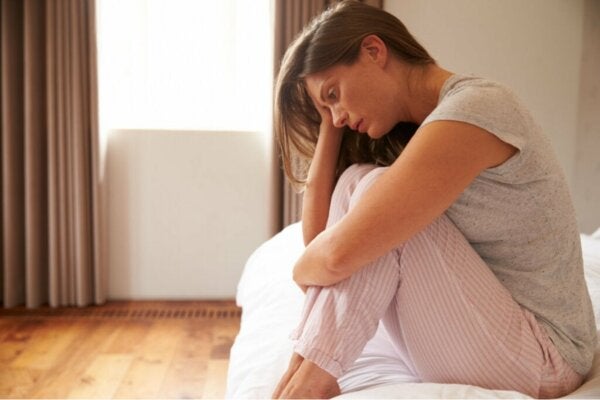 Why does sorrow last longer than other emotions? We’re sure you’ve felt sad at different moments in your life. But has your pain ever persisted without you knowing why? Sometimes, sorrow burrows into your mind like the very worst of companions. It draws you inward and casts a shadow over everything else in your life for days or even weeks.

Antoine de Saint-Exupéry said “Sorrow is one of the vibrations that prove the fact of living”. Maybe he was right. It could be that few emotions are such obvious examples of what human existence so often is: having to deal with disappointments, loss, sorrow, and the echo of things you’ll never see again.

What we know for sure is that you can’t run from sorrow or hide it away like an unwanted toy. Sorrow lasts longer than emotions such as surprise, happiness, boredom, disgust, or even anger. There’s a reason why, and we’ll talk about it in today’s article.

Reasons why sorrow lasts longer than other emotions

Sorrow has a bad reputation. We don’t know what to do with it and, when we experience it, we want to do away with it as quickly as possible. Not only that, but usually if someone sees that you’re sad, they’ll say something like “Cheer up! Don’t be sad. Life’s too short!”

In our collective ideology, we connect sadness with weakness, so maybe that’s why we aren’t good at dealing with it. Paul Ekman, a pioneer psychologist in the field of emotions, says that we’d enjoy better mental health if we understood more about these psychophysiological states.

For starters, something that Ekman explains in books such as Knowing Our Emotions (co-written with Daniel Goleman) is that sorrow lasts longer than other emotions for a very concrete reason: it’s made up of many other emotions. In other words, sorrow never comes by itself. It’s like the cork on a bottle. When you pull it out, you discover anger, annoyance, and even fear.

Dissecting sorrow, finding out what it’s made of, can help you understand it and move on. However, other factors also explain why this emotion is so persistent.

You’ve been in a relationship for five years, and you’ve invested everything in your partner. You’ve tried your best to make things work, but in the end, you realize that the healthiest thing to do is end the relationship. After the breakup and so much time spent fighting for that love, you feel infinitely sad. That sadness lingers for months or even years.

Someone else in your position, however, might interpret that breakup as somewhat of a relief. This small example shows us something very simple. Sorrow lasts longer than other emotions because the things that trigger it are more profound. They’re often related to events that could be traumatic. Even so, everything depends on how you interpret those experiences.

In addition to how you process the event, your coping skills play a role. Some people are more resilient when it comes to dealing with adversity. Others retreat into a state of helplessness that makes their sorrow last longer.

The danger of rumination: when your thoughts feed your sadness

The Catholic University of Louvain conducted a study that sought to gain a deeper understanding of human emotions. Researchers were interested in knowing how long psychophysiological realities such as happiness, fear, and shame last. One thing they discovered is that happiness isn’t one of those long-lasting emotions.

The fact that you can’t let go of whatever caused your disappointment, loss, or suffering doesn’t just make sadness last longer. It also intensifies it.

There’s something else at play here as well. Sadness can sometimes crop up without a concrete motive. In that case, your thoughts continue to fan the flames of your sorrow and intensify the suffering and negativity.

Why does sorrow last longer than other emotions? Due to our resistance to it

One of the reasons that sadness lasts so long is because we try to resist it or avoid it. Refusing to accept this emotion makes it very difficult to deal with.

An emotionally healthy approach is to validate each emotion and understand that, in abnormal situations, complicated emotions are normal. Understanding them, accepting them, and knowing how to deal with them provide balance in your life. Acknowledging that your emotions are normal makes it possible to face adversity with strength and resilience.

Therefore, maybe it’s time to rethink a lot of the things you’ve learned about sorrow. Strength doesn’t mean putting up with everything and pretending to be fine. Being courageous means falling and getting back up again, crying to make yourself feel better, and seeking refuge and wisdom in introspection.

Denying your emotions, feigning strength, and pretending that nothing hurts you only deepens your wounds and makes your sorrow last longer. As Antonio Damasio pointed out, humans aren’t rational beings who get emotional, we’re emotional beings who know how to reason. Having a solid understanding of your own emotions will help you lead a more satisfying and healthy life.

5 Differences Between Sadness and Depression
There are many differences between sadness and depression. In this article, we'll take a look at some of the biggest differences. Read more »
Link copied!
Interesting Articles
Emotions
Do You Know What Your Basic and Secondary Emotions Are?

Emotions
Why Do People Cry Tears of Joy?

Crying is usually associated with feelings of loss, sadness, disappointment, or melancholy. Tears help us express grief, frustration, or anguish...…