A Baobab Tree in the Heart - Reflections on The Little Prince 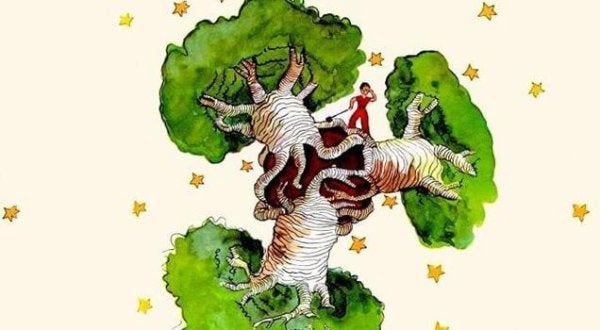 If you find a baobab tree in your heart, pull it out from the root because its seeds harbor fear, insecurity, deception, and rage… Do as the little prince did. He removed the seeds of the gargantuan baobao trees from his small planet every morning. He did this out of fear that they might grow too large. If they did, their giant roots would destroy everything known and loved…

Some fears are intelligent rather than phobic and they increase our well-being. These fears regulate our survival, since they are controlled fears. Even so, on certain occasions, and without even knowing why, those baobab seeds are still able to come and infect everything. They are right there, beneath the soil of our psychological garden, growing sometimes silently, but still altering our balance and our focus.

“There are good seeds for good plants and bad seeds for bad plants. They sleep in secret in the ground until one of them decides to wake up. At that time, it begins to lengthen and, shyly at first, a lovely, harmless little branch grows toward the sun. If it is the branch of a radish or a rose bush, we can let it grow as it likes, but if it turns out to be a bad plant, we have to pull it out as soon as we can determine what it is.”

It’s possible that, among the many reflections that Antoine de Saint-Exupéry left for us in The Little Prince, this is the most interesting. In the book, our small protagonist tore up the “bad” seeds from his planet while caring for and watering the “good” seeds. The bad seeds were the baobab seeds. These were the ones he had to eliminate to the root before they could destroy his planet from its core. The rose bush seeds were the good ones. He had a special predilection for these.

This subtle metaphor no doubt symbolizes the shape of our fears, from those darkest zones from which our cognitive distortions are strengthened. Those are the sources created by rate, worry, or sadness, which fog our mental palace out of view and make it crack.

Each of us has a baobab in our heart. It might, perhaps, be only a seed today – invisible, dormant, and without causing any trouble. Some, however, are suffering the effects of its growth. The bobab’s impact is that expands its roots and churns everything around it. It changes everything and destabilizes it. This is because fears, just like resentments, implode and destroy internal order, logic, and autonomy.

In The Little Prince, the protagonist asks the pilot in a scene if the lambs eat bushes. When he responds in the affirmative, the protagonist reacts with immense joy. He thinks that he will finally be able to get rid of the threat of the baobabs. Nevertheless, the pilot shortly corrects him: a baobab is not a bush, but a tree. The baobabs are trees as big as churches. They are so immense that not even a herd of elephants would be able to finish eating one.

The little prince, imagining this scene, suggested that maybe he could stack elephants one on top of the other. But seconds later, he cautioned that the best strategy could only be to avoid their growth. This is because when a baobab has grown too much, nothing else can be done. Those large destructive elements must be stopped in their earliest phases, when they are very small and nothing more than seeds…

“The ground on the planet was infested with baobab seeds. And if we do not remove a baobab seed on time, it will never be possible to be free of it. It will obstruct the whole planet. It drills through it with its roots. And if the planet is too small and the baobabs become large, they will make it shatter.”

The importance of halting the growth of baobabs in the heart

There are some who see something more in the metaphor of the little prince’s baobab as something more. There are those who warn that, more than just the seeds of our fear, there could also lie the beginnings of evil itself. That destructive force makes the heart sick and is capable of influencing the worst atrocities. It can give shape to the most devastating scenarios of violence and destruction. We all have these in our collective memory.

Ultimately, that baobab seed has always been and will always be inside of us. Whether we will raise it and allow it to grow depends on us. Just like on the little prince’s planet, there are good and bad seeds in all of us. Whether they germinate and give root certainly depends on innumerable factors. For example, our upbringing, education, and life experiences…

Regardless, we cannot forget that it is in our hands whether or not we want to be diligent gardeners. We can remove the bad plants on time. The bad seeds have no use for us. They destroy the environment and break the natural balance of our personal garden. This important task is the one that the little prince undertakes every day. He is the one who removed what he didn’t want and tended to what he valued most: his rose bushes.

We don’t need lambs or a pack of elephants stacked one on top of the other in order to accomplish this cleaning task. If we have a baobab in the heart, we have the responsibility to remove it on time. At least we should not help its seeds grow. This maintenance task contributes to balance, gives us wisdom, and gives us a sense of discipline. It allows us to be attentive to any change, any unusual growth. Through this, we can stop small problems from growing into immense and terrible baobabs.

3 Steps to Emotional Wisdom
A lot of us have been taught to box up or repress our emotions, but with these 3 steps to emotional wisdom, you can learn to live a healthier life. Read more »
Link copied!
Interesting Articles
Psychology
The Pain of Separation: Togetherness as a Fundamental Right

Everyone has experienced stress before. Stress affects different aspects of your day-to-day life and can even condition you in certain…