Why Do Some Unhappy Couples Stay Together? 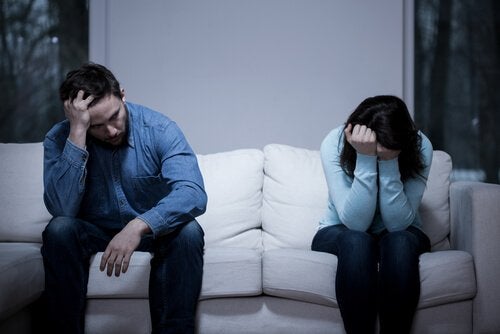 For a lot of people, being successful in love is at least as important as being successful at work or with their family. But there’s nothing easy about finding a relationship that works perfectly. That’s why so many unhappy couples settle for a situation that’s not exactly ideal. It’s why they end up staying together even though they have a lot of problems.

In today’s article we’re going to look at the main reasons unhappy couples avoid breaking up, even when they’re just not good together.

Why do unhappy couples stay together?

You probably all know (or have known) at least one relationship that doesn’t work but they won’t break up. The psychology of relationships is still in its early phases, but that doesn’t mean scientists aren’t looking into things. One of the main things they’re researching is why exactly unhappy couples stay together.

According to a few studies, there are certain common reasons people stay in their relationship, even when it’s painful. Here they are:

We’re going to look at each of these in more detail now.

1- For reasons outside of the relationship itself

One of the main reasons unhappy couples say they don’t break up is that there are external factors stopping them, like not having money or because they have children together. Ending the relationship would obviously lead to a lot of suffering because of these factors. So the couple decides to stay together even if it’s bad.

However, a lot of times they’re just trading pain now for pain in the future. They just make the pain last much longer. For example, most couples who stay together for their children end up doing them more harm than good in the long-term. That’s why it’s usually better to find a solution when there are external factors keeping the relationship alive even though it stopped working a long time ago.

Another big reason a lot of unhappy couples stay together is their religious beliefs. As an example, just look at any country where Catholicism is very important. In these places, divorce fees are much higher than they are in secular countries.

This has to do the religious belief that marriage is sacred. So they see breaking it apart as one of the worst things any couple can do. Thus, married Catholics would usually rather be unhappy in their relationship than commit such a terrible act (in their minds).

3- Having a strong commitment to each other

But not all unhappy couples who stay together do it for external reasons like money or religion. Sometimes the main reason people stick with their stale relationships is that they have a strong commitment to each other.

One of the most widely accepted theories about how relationships work is Sternberg’s triangular theory of love. The theory says that one major part of any relationship is commitment. It also says that there are two other things you need to have a strong relationship: intimacy and passion.

But there is still a kind of love based solely on commitment, and it’s called empty love. Sometimes that’s all it takes to keep a relationship going. It’s strong enough to overcome any of the problems the couple might be going through.

One of the most harmful cognitive biases you can fall into is the sunk cost fallacy. Here, you have something you’ve put a lot of effort and resources into and you feel the need to stick with that thing even if it’s obviously not working. It happens to gamblers — and also couples.

The sunk cost fallacy can hurt you in a lot of different ways. When it comes to relationships, it can push you to fight for a relationship that doesn’t work anymore. You basically just do it because you’ve already been together for so long. That might sound nice in theory, but you’ll only end up resenting your partner. It will only pusher you farther away from each other, never closer.

Try to remember these things if you’re ever tempted to stay in a relationship just because you’ve been together for a while. Sometimes it’s better to suffer a little in the short-term than it is to suffer a lot in the long-term.

7 Destructive Myths About Relationships
Here we're going to focus on myths about relationships. These are ideas that our society and culture say are true but rather than helping, they end up making them more complicated. Read more »
Link copied!
Interesting Articles
Psychology
Living with Borderline Personality Disorder