6 Tips to Improve Communication Between Parents and Children 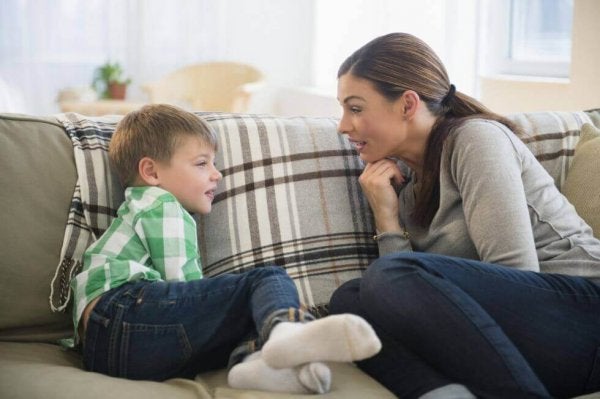 There is no parenting manual that will work for every single parent in the world. But there are certain general guidelines that can serve as your trusty compass if you want to have a good relationship with your children. These guidelines can also guide you in how to talk to them about delicate subjects. Communication between parents and children is of the utmost importance.

In this article, we’re going to offer you tips for better communication and more empathy. We’ll give you advice on how to listen to your children actively and to get them to talk to you.

“The most important thing in communication is hearing what isn’t said.”
– Peter F. Drucker –

Try to not be imposing, talk with your children!

When communicating with your children, it’s best to not give narrow-minded, “this is how it is” kind of opinions. This is especially if your children are not so little anymore. Talk with them, ask questions, encourage shared reflection.

Let’s listen to the reasons why they did what they did and try to come to agreements you both agree on. It’s true that this takes more effort, but these agreements are much more likely to be followed.

As parents, we want to control every situation our kids experience. At home, with their siblings, their friends, grandparents, at school, etc. We believe that if we tell them what to do, even when the situation is already over, they will obey and be protected if anything like that ever happens to them again.

The best way to help your children with conflict is to help them reflect and try to understand the reasons why they behaved this way. This will also be good for your relationship, since they will feel they’re being listened to and taken into account.

“A man’s character may be learned from the adjectives which he habitually uses in conversation.”
-Mark Twain-

Talk to them about your own experiences

Communication between parents and children should be two-way and adapted to the age of the children. You may find it to be very beneficial to tell them about your own experiences, both past and present. Tell them about how you feel and what you think. This makes you seem more human and knocks down that front you sometimes project of being invincible.

With this style of communication, your children will feel closer to you and learn new ways of solving problems. That doesn’t necessarily imply that they will do the same, but it will pave the way towards more openness and trust on their end. They’ll trust you enough to tell you about what’s happening in their lives.

Communication between parents and children requires intimacy and trust.

Active listening means being empathetic and caring about the feelings behind the story being told. It means you’ll have to put in more effort at times to break down walls, especially those of insecurity or indecision. That’s why it’s important to not use anything they’ve ever told you in confidence against them. No matter how angry you might be at that particular moment.

Parenting is challenging. One challenge is opening your mind and understanding that they have a different way of viewing the world. A perspective that deserves just as much respect as your own. You’re going to have to acknowledge your child as an equal, a peer, or even as a superior in certain debates as they get older.

“Whatever words we utter should be chosen with care. For people will hear them and be influenced by them for good or ill.”
-Buddha-

It’s important to be open when you’re speaking with your children. You want to know what they like, what their interests are… But your kids need a parent to guide them and set limits; they don’t need you to be a friend. That is not your role, or at least not your main role.

For your kids, as they get older and become teenagers, there will be topics they will not want to venture into with you. It’s important that you respect this and be patient with them. Maybe they don’t want to talk about it now, but if you keep the door open, they might wander in a few days later.

Also, if you keep good lines of communication open and stay close to your children, these topics will be few. In the end, they’ll come to you when they have a pressing issue. But, like we said, that will only happen if you respect their privacy and independence (depending on their age, of course). Otherwise, they’ll just move away from you in order to protect their rights.

Communication between parents and children should be direct and clear. If your kids see you talking about them, your family, and other personal subjects with other people, they’ll probably get withdrawn. They’ll be afraid that you’ll share their secrets.

Another foundation of good communication is sincerity. It’s important to try to always be honest about what you think, say, and feel. This also means keeping the promises and commitments you make.

If you’re sincere, your children will probably still come to you even if they know you won’t like what they have to say. They will do something wonderful: trust you to find solutions to their problems.

Being honest also implies asking for forgiveness and owning up to your own mistakes. Your children will behave as they see you behave. You are their role model. If you don’t act with honesty and integrity, it’s likely that they won’t either.

Don’t argue with your children over “who’s right”

So often, conversations turn into arguments and fights. It’s important to avoid this by keeping your cool and behaving like the adult you are. Use an appropriate tone of voice and listen first — no interruptions.

Remember that you’re the adult, but that doesn’t mean that your children don’t have their own opinions or reasons for acting how they do. Therefore, talking to them without trying to impose your own ideas is the best way to foster good communication. Plus, you’ll also be making them feel valued and heard.

Final tips to improve communication between parents and children

Here are some final recommendations. Work on these and pave the way to a communication style based on trust.

Communication is the foundation of any relationship. Indirectly, it is a determining factor in fundamental values, like trust and sincerity. That’s exactly why we say that communication between parents and children is worthy of some time and thought.

Giving From the Heart: Empathetic or Non-Violent Communication
Words are a double-edged sword. They can build deep relationships, but they also have the power to destroy them and cause pain. what is non-violent communication? Read more »
Link copied!
Interesting Articles
Cinema, Television, and Psychology
The Bar: The Absurdity of Human Nature

Psychology Today
How to Get Your Life Back After Home Confinement

Few things are as uncertain as thinking about what life will be like after this home confinement. Our minds are…