What's Positive Reinforcement and How to Use It?

What is positive reinforcement? How can we use it? We're going to take a deeper look at this today, and, in addition, we'll get to know the great variety of reinforcements that we can apply, not only in therapy, but also in our day to day lives. 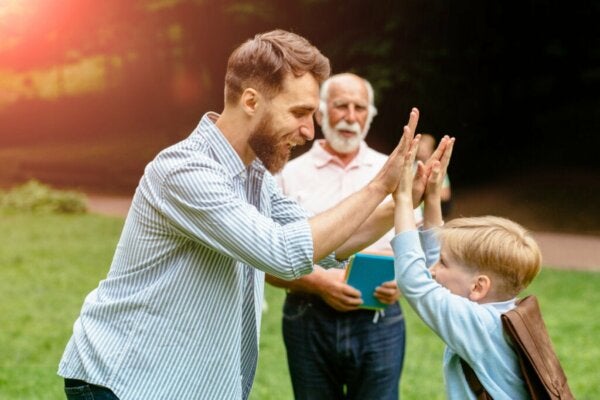 How can we ensure that someone repeats certain behavior patterns? How do we increase their frequency of occurrence? It’s all related to positive reinforcement, a procedure used especially in education and behavioral therapy where people seek to empower certain desired behaviors or attitudes.

But what else do we know about positive reinforcement? How is it used? What types of reinforcements exist? How is it different from punishment? If you’d like to know the answers to these and other questions, as well as discovering possible reinforcements to apply in your day-to-day life, then read on!

What’s positive reinforcement and how to use it?

Positive reinforcement is a widely-used resource in behavioral therapy and education. This type of reinforcement includes all the elements that can increase the probability that a certain response will occur.

We’re talking here about things that will help us to consolidate certain behavior patterns and help them to occur more frequently. These tend to be, quite logically, appropriate and positive behaviors and attitudes, such as sitting properly at the table.

Skinner stood out for describing, in a systematic way, the characteristics of this type of learning procedure. In addition to this, he applied it to several different fields, and especially in education.

Positive reinforcement, moreover, is a technique that forms a part of operant conditioning. This is a learning system based on the application of reinforcements and punishments in order to increase or reduce the probability of the appearance of certain behaviors.

Through this type of procedure, the person creates an association between their behavior and its consequences.

Thus, what’s the actual positive reinforcement? Almost anything, in fact. It can be praise (verbal reinforcement), objects, gestures, presents, prizes, words, and food, among many other things.

How to use positive reinforcement

A number of factors will make positive reinforcement more effective. They’re related to how to know which procedure and type of reinforcement to use:

When using positive reinforcement, we must also take into account the following in order for it to be effective:

“Education is what survives when what has been learned is forgotten.”

To understand what positive reinforcement is more clearly, we should define the antagonistic relationship between reinforcement and punishment.

Both reinforcements (either praising or taking away tasks), if repeated over time right after the behavior we want to encourage, would increase the likelihood of this desired behavior occurring. (In this case, it would be the child eating all their breakfast or finishing all their homework).

On the other hand, punishment is the opposite of reinforcement. This will usually reduce the probability of the person making changes to the behavior we want to eliminate.

On the one hand, we have positive punishment. For example, telling a child to stand facing a wall, giving them a stern talk, or scolding them. On the other hand, negative punishment is removing something that the child wants. Some examples are taking away their TV time or forbidding them to go out during the weekend.

So, the essential difference between “positive or negative” of both procedures is the appearance (positive) or removal/disappearance (negative) of some element of behavior. The main characteristic of the procedure of reinforcement is that it seeks to promote desired behavior. In contrast, the punishment seeks to eliminate undesirable behavior.

“Education is the most powerful weapon you can use to change the world.”

There are up to a total of sixteen types of positive reinforcement, grouped according to six criteria, according to the Vallejo Behavioral Therapy Manual (2012):

1. According to their origin

Positive reinforcement, according to its origin (reinforcing value), can be classified as:

2. According to the reinforcement process

According to this criterion, positive reinforcement can be of two types:

3. According to the administrator

Depending on who administers the positive reinforcement, it can be of two types:

4. According to the recipient

Depending on the person receiving the reinforcement, we can highlight the following:

5. According to its nature

Depending on its nature, positive reinforcement can take the following forms:

Finally, according to programming, we find the following types of reinforcements:

It’s evident that the use of positive reinforcement offers very positive results in education. Moreover, it forms part of broader behavioral programs and treatments, such as ABA therapy (Applied Behavior Analysis), devised by clinical psychologist Ole Ivar Lovaas, and especially indicated for children with autism.

In all of them, positive reinforcement is used as a tool that allows a person to reinforce and empower the behavior that they desire to maintain. In other words, those that are adequate or appropriate.

Positive reinforcement is very appropriate, not only to maintain desired behaviors but also to create (establish) behaviors that don’t yet exist.

We find many positive aspects of this resource: making a child happy with different objects and actions, guiding them in a respectful learning process, and motivating them with different reinforcements to aid their development. Reinforcement can, indeed, be an educational tool that provides learning.

3 Behavioral Techniques for Parenting: Reinforcement, Punishment, and Extinction
When it comes to parenting, sometimes we don't really know how to stop inappropriate behavior. But behavioral techniques can help us to control these and other behaviors. Read more »
Link copied!
Interesting Articles
Educational Psychology
Prison Education

Children are developing humans. As adults, educators, and parents, it's our obligation to provide them with a safe and sensible…