Discover what solastalgia is in this article! 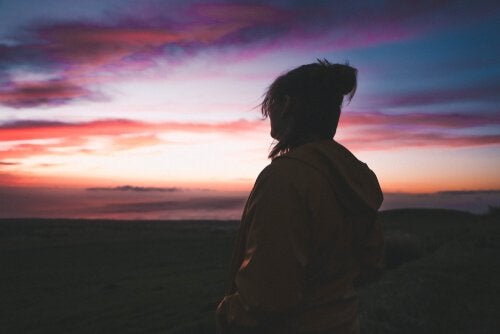 Being too detached from nature can cause distress. Philosopher Glenn Albrecht coined the term solastalgia to describe said distress.

Historically, human beings’ relationship with the environment hasn’t been easy due to the diversity of opinions. Either one must become one with nature or, on the contrary, use one’s capabilities to shape the environment according to one’s tastes.

In the middle of these conflicting opinions, solastalgia manifests when a person looks around and feels that something just isn’t right. Furthermore, when they can’t help feeling sad when they look at the trees, the flowers, or the sky.

Interestingly, most people feel happier and calmer in a safe natural environment, conversely to living surrounded by concrete and the usual stress of a big city.

“People in mourning tend to use euphemism; likewise the guilty and ashamed. The most melancholy of all the euphemisms: “The new normal.” “It’s the new normal,” I think, as a beloved pear tree, half-drowned, loses its grip on the earth and falls over.”

The effects of being too detached from nature

Author Richard Louv coined the term nature-deficit disorder in his book Last Child in the Woods. This curious phenomenon is associated with an increase in cases of attention deficit, obesity, and depression, as well as other physical and mental health problems.

This lack of nature can affect children and pets in particular because they unconsciously know that they have an innate right to be in contact with their natural environment through, for example, trips to the woods, the beach, or the mountains.

This disconnection from the artificial world can help us improve our concentration. Also, it reduces the stress and irritability that stem from our daily routine.

In addition, spending more time in contact with nature helps us relieve and avoid the risk of suffering from respiratory diseases. This is because there’s a lot of pollution in the urban environments we inhabit.

Furthermore, obesity, hyperactivity, and lack of vitamin D can manifest from not being outdoors enough. The problem is that these symptoms can lead to severe diseases.

The norm is for natural environments and landscapes to be sources of tranquility and satisfaction. This is what’s known as topophilia, when a person loves the place where they grew up or where they live.

However, topophilia often turns into solastalgia. That is when a place that’s close to one’s heart is, for example, invaded by a polluting thermal power plant, when a forest fire starts, or even when that forest is cut down to build a highway.

A person suffering from solastalgia feels that there’s an unwanted change in their environment. Furthermore, they feel like they’ve lost something forever. In this sense, solastalgia is similar to nostalgia, only with the particularity that it happens in the present and in the place in question.

Solastalgia is a reflection of our own experience

Due to the continuous changes in one’s natural environment due to globalization, solastalgia is an increasingly common phenomenon these days. Moreover, climate change, urbanization, the incessant production and disposal of plastic and other waste products, mining, the use of more land for agriculture and livestock, the construction of factories, and the omnipresence of technology lead to it as they alter one’s environment.

All of these things threaten the integrity of the natural landscapes that most people feel entitled to enjoy, which may lead to stress and sadness.

As a possible solution to solastalgia, go out of your concrete landscape as often as you can. If you don’t do it for yourself, then do it for your children or your pets, as they’re often the most affected.

Also, promote other feelings of attachment to nature and life such as biophilia and eutierria, which is the love for the connection between the Earth and its living beings.

The Power of Patience and Anxiety Management
The mind often goes faster than life itself. One of the keys to help you slow down is to practice the power of patience and cultivate your ability to wait. Read more »
Link copied!
Interesting Articles
Wellness
Don't Expect to Understand My Journey, You Have Not Walked In My Shoes

Don't expect anyone to understand your personal journey if they have not had to follow the same path. They have not…

Wellness
Fall in Love with My Dark Side

Anyone can fall in love with my virtues, with the parts of me that shine. But up until now, nobody has had…

Wellness
I Can Live Without You: The Importance of Emotional Independence

“I can’t live without you.” “If you leave me, I will die.” Few phrases can end up being more dangerous…

Absences hurt, but it is a pain that gets weaker and goes away with the passage of time; however, the…