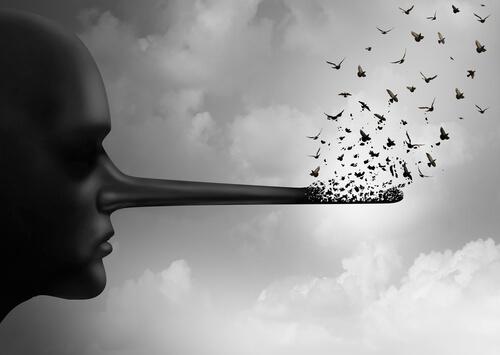 Post-truth is all the rage these days. This little word is mentioned every once in a while, even though it may not have been fully explained. But don’t worry, we’re here to help you understand what it’s all about. Post-truth is a deliberate distortion of the truth. In other words, post-truth is a manipulation of beliefs and emotions with the objective of influencing public opinion in terms of peoples’ attitudes.

Post-truth refers to using emotions to unleash people’s emotions to change their thoughts and, at the same time, hide facts. The field in which post-truth is most famously used is in politics. Because of this, some terms such as “populist discourse” or “fake news” that consist of post-truth have been created. Further on in this article, we’ll explain these terms and the psychological keys that help us understand them.

The Use of Post-Truth

As we stated, you can find post-truth in speeches. Many politicians have used it to get the people’s support. One of the most commonly used resources is the populist speech. These speeches excite the masses because they promise impossible things. They promise them policies “by the people and for the people” or simple solutions to all of their problems.

On the other hand, there are a lot of fake news nowadays. This is because people take advantage of the social networks and the internet. Fake news means news that is false, also called rumors, that are normally used deliberately in disinformation campaigns. We’re bombarded with so much information nowdays. The term for it is infoxication. Thanks to it, it’s very difficult to verify whether things are true or not. This ultimately contributes to people sometimes believing fake news as e

Why post-truth is so attractive?

Why is it that post-truth is so attractive? And why do those speeches and news stories convince us to believe in them? For the most part, the reason post-truth is so attractive is in the narrative. The speeches and the news stories share many characteristics that increase our taste for them. Some of these characteristics are that they’re simple and sensible. They spread very simple explanations we can understand and also seem to make sense.

Post-truth is based on dichotomies like “Everything is either black or white” and “If you’re not with us, you’re against us.” Also, post-truth promotes a very hopeful future. These post-truth characteristics make it look good, especially for certain people. Specifically, people who feel confused, disoriented, and insecure. These characteristics make people susceptible to needing a higher level of closure. Aside from this, these people normally feel threatened, humiliated, or insignificant. Because of this, they have an intense desire to search for importance.

As we’ve explained, there are two psychological factors that make us more prone to believing post-truth or the narrative of post-truth. These are a need for closure and motivation to search for a source of importance. Both of these factors describe the mentality of “globalization’s losers” who feel abandoned in a world that changes rapidly and where they can’t find their place.

People with these characteristics feel disoriented and confused. Their way of doing things doesn’t work anymore. Technology has made their skills obsolete and these have taken away their employment opportunities. They feel humiliated and undervalued. In their desperation, they passionately grasp the narratives of post-truth, which blow away their uncertainties and promise to make them great again. These promises of being able to end all of their problems and the offer of certainty and hope will be accepted by them very easily.

However, even though the use of the internet has increased the amount of fake news, it also gives us the resources to recognize it. There are specialized web pages where these false news stories (for example, Maldito Bulo) and guides for teaching people how to distinguish between fake and real news. They advise checking who the author is (many fake news stories don’t have an author), verifying that the same story has appeared in different places, and identifying where there’s a clear ideology or if, on the contrary, it presents different points of view. Ultimately, in order to avoid being fooled by post-truth, you have to develop your critical thinking abilities.

9 Signs of Psychological Manipulation Through Our Words
Psychological manipulation in our communication is an all too common occurrence. Read on and discover 9 signs that people are manipulating you with their words. Read more »
Link copied!
Interesting Articles
Psychology
Self-Harm or The Desire To Hurt Oneself

Self-harm is sometimes the only way a person feels they can deal with problems. They try to express the feelings…

The Eysenck model is one of the most important pieces of research on personality that has ever been done. You'll see that…