What Politicians Say with their Non-Verbal Language 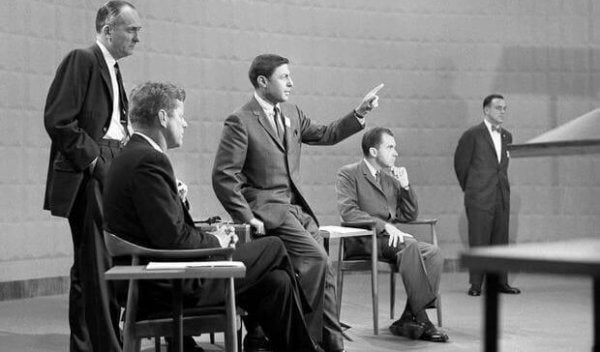 A lot of the most popular politicians use distinct verbal language. They mostly use it to communicate with their followers. When it comes to mass communication, gestures and non-verbal communication can actually have a lot more impact than the words themselves.

Crowds don’t have a high attention span when they listen to politicians. They retain the overall message of the words. They mostly focus on the messages boiled down into slogans. On the other hand, the leader’s image has a big impact. The communications specialists of each party are very careful with this. The way the politician dresses, their tone of voice, facial expressions all count. Even their gestures lead to a specific feeling towards them.

“The shadier a politician’s desires, the more pompous, in general, the quality of his language becomes.”

Politics is getting more and more mixed up with entertainment. Televised debates have been decisive factors during elections in many countries. The media has almost never had such a big impact on the number of votes. And most citizens glue themselves firmly to traditions and feelings when it comes to taking part in the politics of their country.

Researchers have picked up on seven gestures that are common in the politicians who manage to gain the sympathy of the masses. These mannerisms also exist in other kinds of leaders, like business people, managers, or TV “influencers.” They’ve also picked up on other gestures that reveal hidden messages. We’ll tell you about them below.

The 7 effective gestures politicians use

People unconsciously associate people who use certain gestures with a sense that they’re powerful. Of course, this applies to political leaders. Some politicians do them naturally, but other ones have to practice until they make them natural. Here are the non-verbal aspects these people use:

What people expect from their political leaders nowadays is a kind of protective, trustworthy friend. It’s the same with business leaders or anyone who has a position of leadership and power.

Politicians and leaders always create a visual impact with their presence. It’s their first act of communication with their followers. With that visual impact, there are four areas that have a lot of influence: facial expression, body language, manner of dress, and tidiness. All these elements are part of non-verbal language and create an “impression,” that is, they leave a mark on our perception.

When there’s a hidden message, there are elements of non-verbal language that give it away. Here are some of them:

Politicians use psychology of the masses more and more to be able to influence their constituents. It’s a subtle weapon, but it’s very effective. People sometimes use non-verbal language as a communication tool, and other times as a way of manipulating. By knowing how to interpret the bodily expressions of leaders, you’ll be in a better position to control the influence they might have over you.

What Active Listening Means for Relationships
Do you know how to listen to people? Or do you just hear the words coming out of their mouth, missing the real meaning? Active listening is imperative for good interpersonal communication. Read more »
Link copied!
Interesting Articles
Psychology
I Like My Breaks, My Little Bit of Time for Myself

Our breaks, our "parentheses" of loneliness, silence and sensory disconnection are like nutrients for our hearts and brains. It's a…

Up until just a couple of decades ago, women in their fifties were seen as sweet grandmothers. At that age…

Every relationship starts with a connection. This is how friendships begin and love grows. Knowing how to connect with others helps us to be better friends, lovers, parents, and bosses. It also allows…

Psychology
Humor Makes Us Happy and Happiness is Contagious

Humor and laughter takes the edge off in intense situations. But, in a lot of situations it's not seen as okay…

Psychology
8 Concepts in Psychology that We Use Badly

There are many concepts in psychology that we use badly. This could be due to inexperience, lack of knowledge, or…