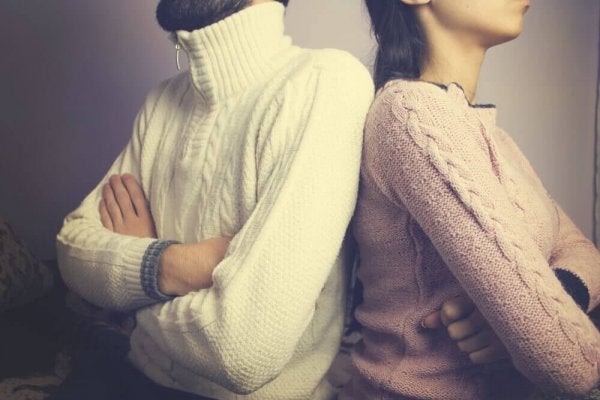 Sometimes, our way of expressing our thoughts and our behaviors leave a lot to be desired. We are brusque, rude and we don’t bear in mind the feelings of others. In fact, some of these behaviors can do so much damage that they end up breaking down friendships, relationships and even families. So, what are these attitudes? And how do they destroy personal relationships and upset us?

More specifically, we are referring to criticism, contempt, fighting back and total retreat. We could say that these are all behaviors of “sincericide”. This is because when we do these things we take a jump into the unknown. This results from a misunderstood sincere comment. Also, being honest is not incompatible with being tactful, delicate and restrained. We can say the same thing in different ways without hurting anyone. Let’s go deeper into these attitudes which destroy personal relationships.

The destruction of our relationships

When someone answers an innocent comment in a rude or disrespectful way, they are unintentionally activating the emotional part of our brain. But not in a positive way, rather in a negative way. Thus, this activation creates a dilemma between two actions. We aim to protect ourselves: flight or fight.

Normally, when we feel attacked, hurt or offended by someone we trust, we tend to let their comment pass. But we may respond to them angrily  What we decide will depend on the level of opposition or hostility that we feel.

Among the attitudes that destroy relationships there are traces of anger and contempt and, sometimes, resentment

However, the effect that a comment has on us tends to be the same: anger, rage or disgust towards the person who said it. So, if every time we see them, they verbally attack us, we will get tired of it. No-one likes spending time with someone who constantly makes them feel bad.  For this reason we decide to end the relationship.

The attitude of criticism

“You always leave everything dumped on the floor”, “you never wash your hands before eating”, “you always arrive late, no-one can stand it” are examples of destructive criticism. As well as not giving a solution for the behavior, they are phrases which contain emphatic and decisive adjectives (“always”, “never”). They are expressions that leave no margin for understanding or flexibility of behavior.

However, criticism can be transformed into a constructive suggestion or swapped for a less hurtful comment. In this way, we can avoid arguments, misunderstandings and the deterioration of our relationships.

In the previous examples, we could add, “If you leave everything on the floor, I have to pick it up. I already have enough daily chores. I would like you to help me”. Or “When you arrive late, you show me up. I don’t like apologizing for you every time it happens”.

The attitude of contempt

While criticism mostly manifests in speech, contempt can be shown in two ways: in gestures and verbally. The first of these is more subtle, but is equally destructive.

Let’s take a look at some examples. A group of friends have arranged to have dinner after not seeing each other for a long time. One of them realizes that the others, instead of being friendly her friends are criticizing her. Or there’s the boss who, whenever they talk about one of their employees, looks up to the sky as if crying out for that person to “shut up, please”. Both cases are very hurtful for those on the receiving end.

There is no worse deprecation than not showing appreciation.

The language of sarcasm is another form of contempt. It is a form of hidden aggression which, when misunderstood or used at the wrong moment, can also do a lot of damage.

Fighting back and total retreat: attitudes to increase the conflict

Sometimes we believe that when we are attacked we only have two options: fight back or escape. If we go for the first, the most logical thing is that we automatically respond with the first thing that comes into our head. And this doesn’t tend to be something pleasant. This also causes upset in the other person, which can make them fight back towards us too. In this way, you both sink into a dangerous, vicious circle that is hard to stop.

Fighting back is one of the attitudes that destroys relationships. A trap that can cause serious consequences if you don’t know how to manage it. Emotional wounds that are difficult to heal.

On the other hand, total retreat is similar to surrender on a battle field. It is the consequence of an intense power struggle between two people. Thus, after weeks or months of continuous attacks, criticisms or jibes, one of the two will choose to “give in”. To seek dialogue and not confrontation.

At the same time, this attitude exasperates the other person, who is still waiting for an attack to feed their own with. But in the end, when they don’t get any hostile response, they end up getting angry, and shouting. Some people don’t know when to respect the breathing moments of others. Instead of waiting, they increase the conflict with their behaviors and attitudes.

As we can see, the attitudes that destroy personal relationships don’t tend to be pleasant. Nor are their consequences. If someone criticizes us (in a destructive way), we are unlikely to be their friend. Iif we constantly complain to our partner, then we are doing everything in our power to distance them. However, we carry on doing it.

Sometimes, it is worth taking a break to breathe. And be aware of what is happening. Rather than rushing forwards without contemplating the consequences.

Learning to Communicate Effectively
How many times have you tried to communicate something, only to have others interpret it very differently than expected? Read more »
Link copied!
Interesting Articles
Emotions
What Are the Symptoms of Experiential Avoidance Disorder?

Wellness
Numbing Yourself From the Pain Means Giving Up Love

If there is something we avoid feeling like fleeing prisoners of fear, it is undoubtedly emotional pain. We fight so…

Wellness
The Bitterness of Impossible and Disgruntled Loves

Who hasn't had one? One of those impossible loves which you know only exists for you. Idealized, precious, might as…