Allowing yourself to be vulnerable is an act of bravery. In the end, a strong person isn't one who manages to keep a fake image of happiness for a long time. You're strong when you let your feelings out into the world, and when you accept your mistakes and pain. 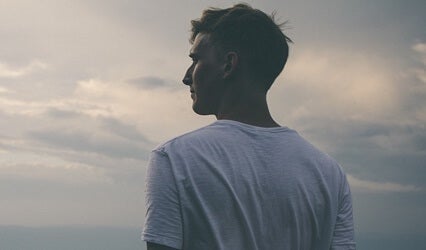 Contrary to what society can make you believe, vulnerability is a psychological value. It’s another part of your reality as a human being that deserves to be accepted. By being vulnerable, not only are you taking over your emotional universe, but you’re connecting more intimately and authentically with your surroundings as well.

Being vulnerable requires strength. In a world where people value confidence and toughness, those who dare to let go of their armor of perfection are notable brave. Vulnerability isn’t a sign of weakness.

It’s worth remembering that vulnerability isn’t synonymous with indisposition, and it isn’t a lack of strength or courage. It’s another side to the human character. Essentially, it’s part of your nature that makes you sensitive toward your needs. It also lets you empathize with other people’s pain and emotional realities.

“I’m just so grateful because to feel this vulnerable means I’m alive.”

You’re not a hero, you’re a person: the power of vulnerability

Mario Benedetti once said that perfection is a polished collection of errors. However, let’s just admit it: people have a hard time accepting their mistakes, failures, and changes. It’s likely that, somehow, society has told you to navigate around the world of appearances and facades of success and good moods, when you’re actually scared, sad, or anxious deep inside.

Thus, from a cultural standpoint, emotional and even physical vulnerability have always had a negative and embarrassing connotation. Whoever gets away from perfection, strength, and determination and instead accepts doubt and mistakes as part of the game, often feels bad about themselves because they don’t comply with what society expects and reinforces.

On the other hand, it’s curious that, in the worlds of literature, poetry, and existential philosophy of authors such as Martin Heidegger, vulnerability is something necessary and constructive. Books similar to Robert D. Stolorow’s World, Affectivity, Trauma remind us that this sort of “dimension” is just another area of our own existence. In the end, you’re human: finite, sensitive, mortal, and erratic.

The balance between vulnerability and strength

It’s amazing to show your abilities in some activities or challenges; it’s wonderful to let others see how good you are at something. However, admitting that you sometimes can’t do everything is also acceptable. In fact, it has to be, because that’s reality.

Taking responsibility for your mistakes, showing your pain or sadness in certain circumstances that overwhelm you, or even telling other people that you’re going through a rough time and need some time for yourself, is also admirable. There’s nothing wrong with it and you’re not less worthy of the good things because you accept that your strength and fragility are both parts of you as an individual.

Toughness isn’t a psychological value but vulnerability is

Seeming tough and infallible won’t always get you to the top, or at least not when it comes to happiness, well-being, respect, and human interaction. In fact, not even in a work setting are these characteristics considered the only way to excel.

Nowadays, aspects such as sensitivity, empathy, and vulnerability can get you great positions in a good work environment, as they make it easier to reach agreements and the entire environment is more humanized.

You’re perfect when you allow yourself to be vulnerable

Brené Brown, a professor at the University of Houston, pointed out that vulnerability is where love, the sense of belonging, joy, courage, empathy, and creativity are born. Thus, why should you assume that when you allow yourself to be vulnerable, you’re imperfect?

It’s sad when someone never allows themselves to be vulnerable. In fact, it’s even sadder when someone never dares to open up to someone else in order to communicate emotions and to feel the other person’s pain or joy. It’s unfortunate that some people obsess over showing the world that they’re competent, tough, inflexible, and that they don’t make mistakes. This dynamic only shows imperfection and unhappiness.

Bravery is showing your lights and shades, your strengths and weaknesses. Courage is being able to fall down when you’re no longer capable of going on, and then getting back up when it’s time. The power of vulnerability makes you human. It makes you more perfect by accepting yourself and others for who they are. Nothing is as comforting as this.

Your Strength Is in Your Vulnerability
“I’m vulnerable,” I admit it. But who isn’t? There are certain things that hurt all of us. There are aspects of our daily lives that affect us Read more »
Link copied!
Interesting Articles
Emotions
The Relationship Between Emotions and Physical Pain

The digestive system is very sensitive to emotional states. It isn't strange for someone to get too surprised about something…

Emotions
The Story of the Origin of Emotions

There's no consensus on how this wonderful story of the origin of emotions came about. For some unknown reason, people…