Violence Is Learned... But It Can Also Be Unlearned 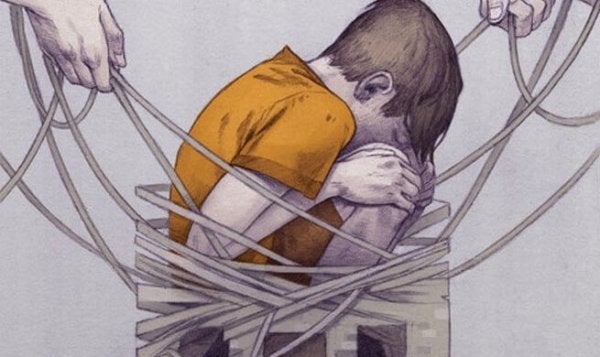 Ever since human sciences started to study violent phenomenon in the mid-twentieth century, one question has surrounded all research on this issue: is human violence instinctive or learned? Many hypotheses have come out. However, there is one thing that’s very clear: all cultures, at all times, have shown aggressive behavior.

Concern over this issue has been increasing over recent decades. World wars showed that the ability of human beings to harm each other had no limit. These and many other facts have led us to see ourselves with fear.

“Violence is the fear to the ideals of the others.”

Perhaps due to these events in history, the concept of aggressiveness has acquired a negative connotation. But it was not always like that. In fact, without the ability to attack or respond to aggression, we would not have survived as a species. However, human beings have taken violence too far and that’s what is worrying.

Sometimes we think aggression and violence are equal, but that’s not the case. Aggression is an instinct. We are born with it and its mark is printed on our mind. It involves a series of physical and chemical processes that happen automatically, without us being aware of it.

Aggression is biological. It puts us into alert mode if there is some danger. It helps us defend ourselves when necessary and adapt to the environment. For example, it’s normal and healthy to react aggressively if someone tries to push us. Our survival instinct means that we respond with aggressive actions to a threat.

Violence, on the other hand, is cultural. It is made up of behaviors intended to harm others, for reasons other than our objective need for survival. Only humans display violent behaviors; no other animal does.

Therefore, violence is learned. Aggression is instinctive, but violence is symbolic. This means that we come into the world with innate tools for responding aggressively when necessary to preserve our life. But the desire and  tendency to hurt others for other reasons is taught. The good news is that you can also unlearn it.

Almost all violent people justify their behavior with false reasons. Most argue that they hurt others to defend themselves, or to teach or instill something that’s positive. It’s also common for the victim to be blamed for inciting violence. And it’s not uncommon for higher principles to be invoked, whether religious or political.

Behind these fallacies lie complex ideological constructs, also false. Violence is first of all symbolic (cultural) and then physical. For example, to enslave black people all over the world, it was first argued that they had no soul.

“Scientific” books were written on their “inferior” and “vicious” behaviors. That’s how slavery supporters justified physical violence against them. The same thing happened with women, indigenous people and now animals.

People say that violence in “self defense” is ok. However, there are many cases where that defense was hollow; there was no threat. Other justifications involve religion: some sacred books portray women as the bane of man’s existence.

Likewise, many wars consist of each side opposing the god of the other, and so they try to erase them and their god from the face of the planet. And as you’ve probably seen or heard about, it is all too common for people to justify violent actions with their “conviction”.

The end of violence

Violent actions, then, have to be removed from the mind, or else they are not removed at all. You can outlaw gun ownership or take someone out of a physically abusive situation. But if someone sees the other person as not worthy, violence will return. It may take on a nonphysical form, such as biting criticism, hurtful mockery, or icy indifference, but it is still violence.

To sum up, there’s no need to fear aggressive feelings, because they are part of our defensive instinct. But we must distance ourselves from violent impulses that only end up breeding more violence.

Verbal Violence: 3 Manifestations of Violence Through Language
Verbal violence is one of the most harmful forms of aggression. Words have the power to leave a mark with repercussions lasting for many years. Read more »
Link copied!
Interesting Articles
Psychology
Seeing a Psychologist Doesn't Make You Crazy

Psychology
Can New Technologies Be Used as Therapeutic Tools?

New technologies have changed our customs, habits, and ways of life. Today, we can't even leave the house without our…

Psychology
Be Like the Lotus Flower: Be Reborn Every Day and Overcome Adversity

Nature gives us the most unexpected answers when we didn’t even think there could be anything beyond our own mind, our…