Suffering In Silence, Such a Human Thing 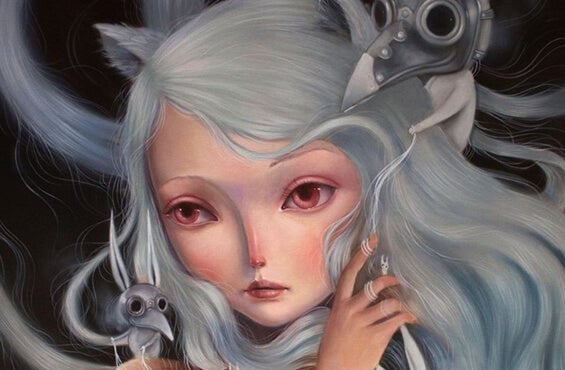 A lot of us do it. We hide in our little shell to suffer alone, quietly, and without anyone noticing. We put on a brave face and pretend nothing’s happening while there are actually endless struggles inside. Until it happens, until one day we just can’t, and we break.

We’re social beings, and yet most of us choose to suffer in a solitary way. We prefer to share laughter, good moments.

We stick to routines with the people around us because that’s how we feel like we have a certain amount of control. As if nothing were devouring us inside.

“You need more courage to confront suffering than you do for death.”
-Marlene Dietrich-

Something both psychologists and psychiatrists are well aware of is that trauma and silence almost always go hand-in-hand. It’s not easy to talk out loud about the thing hurting us.

There are two specific reasons why: we’re afraid of being judged, and above all, showing our vulnerability. Because in this ruthless world it’s the strong personalities that win. The ones that put up with everything, don’t complain, and instead are models of optimism and self-confidence.

It’s devastating to realize that in today’s world suffering is still a stigma. Unfortunately there are so many people with depression that are still going without treatment. In fact, the suicide rate among young people has soared to worrying heights.

Take a second to think it.

Reasons you Should NOT Suffer in Silence

Not long ago, a well-known paper published the personal letter of a woman who said she could no longer go on with her life. She had become a mother for the third time and felt like she couldn’t get out of bed. Strange as it may seem, almost 80% of the comments were purely derogatory, occasionally bordering on cruelty.

Postpartum depression is still an almost taboo subject even today. If a woman experiences this mood disorder after giving birth, she’s immediately stigmatized.

Because what society expects from her is for her to be perfect and happy. So sadly a lot of mothers go through this period behind closed doors, in a private and almost brutal way. All because they fear the world’s criticism.

The same thing happens with teenagers. Boys and girls that are victims of bullying, suffering in silence, not asking for help. They hide in the loneliness and privacy of their rooms, the only place they feel safe. It’s not enough.

We must act before it’s too late. Before our will gets even weaker and our life feels pointless.

6 Reasons We Should Stop Suffering in Silence

The first reason to stop suffering in silence is simple and obvious. If you don’t the suffering will keep on going. If you don’t take the step to ask for help, the pain will just get worse. It will be a long, suffocating, destructive silence.

Connecting in Order to Cure

Suffering isolates us, but connecting with our fellow humans and ourselves is therapeutic. When we share our vulnerabilities and pain with the right person, or a well-qualified professional, we take two steps forward.

The first is because we’ve stopped sabotaging ourselves. No one chooses to go through postpartum depression. No one deserves to be a victim of bullying, or slave to a traumatic past or a lost childhood. And  no one deserves to take such bad care of themselves that they don’t love themselves anymore.

“When you suffer, force yourself to remember a happy moment. One little lightning bug is the end of the darkness.”
-Alejandro Jodorowsky-

The second benefit we’ll get out of it is emotional catharsis. A lot of people come to psychotherapy dressed in the armor of rage. They’re really just hiding their vulnerability.

Eventually therapy will encourage reconciliation and appropriate connection with their surroundings. And then they’ll let their chains fall away bit by bit.

It’s a slow, tedious process, there’s no doubt about that. But it’s something we all deserve: to stop suffering in silence and to have someone who understands us and helps us.

Let’s take a second to think about that. Let’s come out of loneliness so that we can be ourselves again, without fear.

Last but not least, we must remember that suffering changes us. It chisels away at us until we turn into different person. We’ll stop being true to ourselves. And that — that’s something no one deserves.

Growing Through Pain, and Avoiding Suffering
Pain doesn't have to lead to suffering. Pain can be used to produce positive things in our lives. Read on and discover all about growing through pain. Read more »
Link copied!
Interesting Articles
Psychology
The Experience of Children With Divorced Parents

It is often said that giving birth is like a blind date where, finally, the mother will get to know…

Psychology
How to Overcome Anxiety and Live Life to the Max