Vascular dementia causes irreversible neurological deficits in a very similar way to Alzheimer's disease. Although it's due to different alterations in the blood flow to the brain, the person suffers the same effects: problems with memory, language, mobility etc. 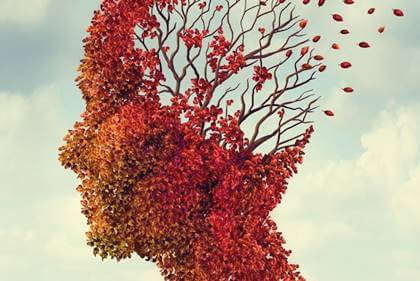 Vascular dementia is, after Alzheimer’s, the most common neurodegenerative condition after the age of 70. The origin of this condition lies in blood flow problems, which make it difficult for blood to reach the brain. It’s somewhat slow and progressive but is something that greatly impacts a person’s quality of life, affecting their memory, movements, and communication.

We should note that, sadly, vascular dementia isn’t a reversible condition. Unfortunately, there’s no treatment to stop or effectively treat this harsh reality that hundreds of people and their families live. However, we can slow down its effects.

We should highlight one aspect at this point. Unlike Alzheimer’s, this type of dementia does have certain protective or precipitating factors, depending on the context, which we can all, to some extent, control.

This doesn’t mean that we can avoid it 100 percent, but it does mean that we can reduce its probability or delay its onset. We can relate vascular dementia to such well-known underlying factors as high blood pressure, cholesterol and triglycerides, diabetes, excess weight, an unhealthy lifestyle, etc.

Therefore, improving your vascular health is within your reach. We’re now going to have a look at the characteristics that define this disease, which accounts for about 20 percent of all dementia diagnoses.

Vascular dementia is the result of a repeated series of small strokes over time, which eventually lead to cognitive, mobility, and communication problems.

Vascular dementia is a neurodegenerative disease that causes cognitive impairment. The origin lies in various vascular lesions and alterations, the most common being the following:

A study conducted by Dr. Constantino Ladecola, and published in the journal Neuron, points out the following:

Vascular dementia has as its origin an alteration in the blood vessels. However, this isn’t the only problem when it comes to sending oxygen and nutrients to the brain. There are also the changes suffered by neurons and glial cells, where the internal homeostasis changes, as does the communication between them.

Why does this neurodegenerative condition appear?

As we pointed out at the beginning, vascular dementia is related to certain risk factors. Thus, experts point out that, on average, this disease usually starts to show itself gradually around the age of 60. However, the symptoms become more evident from the age of 70 onwards. We should note that its onset is more common in men.

These are the triggers that are usually behind vascular dementia:

The symptoms of vascular dementia

The symptoms associated with vascular dementia are slow and progressive. Often, we interpret them as simple absent-mindedness or mood disturbances. However, there comes a time when the person’s functionality begins to be clearly affected and that’s when we should seek medical help and evaluation.

The most obvious symptoms are usually the following:

It’s important to point out that the symptoms associated with vascular dementia may vary depending on the location of the infarcts or vascular alterations. Hence, we may at first see some clumsiness or even the inability to communicate. These realities can either appear suddenly or slowly.

What treatments are available for people with vascular dementia?

The damage caused by vascular dementia can’t be reversed, but it can be slowed down. Hence the importance of early detection, evaluation, and subsequent diagnostic imaging tests (CT scans, MRIs). Once the brain damage has been assessed, the factors that have triggered the condition, such as a heart problem, will be treated.

Doctors will adapt the treatment to each patient’s individual situation, and to which stage of the illness they find themselves in.

Family support is another element that we should take into account in all cases. We mustn’t forget that we’re facing realities that are as hard as they are exhausting, where emotions, resources, and demands come into play that we aren’t always prepared for.

Illnesses
The Relationship Between Depression and Back Pain

There's a direct relationship between depression and back pain. In fact, the former tends to appear along with the latter.…