A Sedentary Lifestyle Can Decrease Memory

Nowadays, more and more people who, despite doing physical exercise, lead a sedentary life for the most part. Do you ever wonder about its health consequences on your brain? Continue reading to find out more about it! 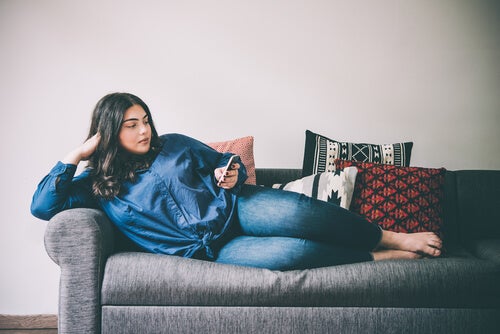 In general, there are many health benefits to staying physically active, especially when it comes to brain structure and function. Although to a lesser extent, scientists are doing research on the consequences of a sedentary lifestyle on these specific things. This is because most people these days, even those who follow an exercise routine, lead a sedentary life.

Some studies even suggested that a sedentary lifestyle could be a risk factor for the development of age-related cognitive decline.

They suggest that 13% of Alzheimer’s cases worldwide could be attributed to a sedentary lifestyle. Thus, reducing it by 25% could prevent more than a million of them.

How are a sedentary lifestyle and cognition related?

In cognitive decline, atrophy occurs in a brain area called the middle temporal lobe, associated with memory impairment and Alzheimer’s disease. Thus, in many studies, researchers observed that physical activity affects the state of this region, especially the hippocampus.

You have adequate blood flow for proper brain function as it promotes the development of new neurons and delays deterioration.

While physical activity increases it, a sedentary lifestyle alters glycemic control and, thereby, decreases blood flow. In fact, the studies found that it leads to a decrease in white matter in only five years.

A recent study led by the University of California, Los Angeles (UCLA) revealed the effects of a sedentary lifestyle in memory-related areas. To do so, they focused not only on the time spent on physical activity but also on the amount of time that a healthy person sits during a day.

For this research, they looked at 49 healthy people with an average age of 60 years. After completing a series of questionnaires about their level of physical activity and the hours they sat, they underwent MRIs and neuropsychological tests. With this, they observed the thickness of the cerebral cortex and the performance of cognitive functions such as memory.

In the study, they found that sedentary people had a thinner cerebral cortex in some areas. Thus, the level of physical activity wasn’t too relevant. This is because they specifically pertain to memory.

Therefore, they suggest that a sedentary lifestyle better predicts performance in these functions. Thus, even when a person has a high level of physical activity, it’s still not enough to compensate for the effect of sitting for long periods of time.

What to do about it?

Despite these findings, physical exercise is always recommended. In this sense, scientific evidence showed that it improves the performance of cognitive functions, cerebral vascularization, and neurogenesis.

In addition, many activities affect performance. For example, reading, learning languages, playing intellectual games, and even interacting with other people. However, professionals recommend maintaining a healthy and active lifestyle. Try to walk to your destination and opt for using the stairs instead of the elevator.

You’ll greatly improve your chances if you follow this advice. Also, you’ll feel better and make the most of your time!

The Sedentary Lifestyle: A 21st Century Problem
A sedentary lifestyle is a dangerous 21st-century trend. Sedentary people are those who do very little to no exercise, increasing their risk for many different health problems. Read more »
Link copied!
Interesting Articles
Healthy Habits
Prevent Childhood Obesity to Ensure Healthy Kids

Healthy Habits
Wasting Time Is as Important as Using It

Wasting time is a relative concept that we should consider from another perspective. For example, as a valuable key to…

Healthy Habits
Kick These Four Habits that Affect Your Sleep