True love isn't magic. It's connection, personal investment, commitment, and genuine respect. It's a love that allows both partners to work together toward common goals, while respecting each other's personal growth. 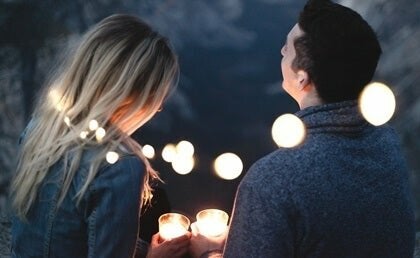 Today, we’re going to tackle an age-old question: does true love really exist? If we had to define true love, we would say that it’s more than just a feeling. It’s a subtle combination of emotions, where causality, connection, and mutual understanding meet. In addition, we find powerful feelings of reciprocity, care, attention, and commitment that allow a couple to undertake joint projects, while respecting each other’s personal growth.

Francisco de Quevedo once said that “Those who love each other from the heart, speak only with their hearts”. However, as we know all too well, people are often unable to communicate effectively. Although their passion might be immense, sometimes, things simply fall apart. As a result, far from being long-lasting, their love ends up being little more than a passing fling.

So what’s the secret? When it comes to affairs of the heart, the key to success isn’t to “love deeply” nor making great sacrifices. The trick is to love well.

Although most people won’t admit it, we’ve all experienced this at some point in our lives. Every time fate has led us to cross paths with someone truly special, we’ve found ourselves wondering if they’re “the one”. Experts on the subject, such as Helen Fisher, have some tips to help you discover if you’re on the right track.

The different components of true love

Nothing is true until we determine its authenticity. When it comes to love, this translates to one simple thing: we fight for the thing we believe truly matters. Richard Schwartz, a professor at Harvard Medical School, indicates that one of the most important aspects of any relationship is the ability to tackle problems.

Like the moon, love has its phases. Thus, devoting yourself wholeheartedly to each of them will help strengthen your bond. When both partners work together and combine your efforts, attention, and commitments, your bond becomes stronger and more significant. This daily effort weaves the fabric of your relationship, making it more real and more resilient.

To better understand the nature of true love, it’s important to understand its various components.

True love is more than a mere feeling or a fleeting passion sparked by a series of neurotransmitters. The initial stages of love are characterized by a few key elements:

True love can also be defined as a long-lasting mental and emotional state. For example, this means that our love and concern for our partner is ever-present. In addition, we feel a constant need to boost their well-being, relieve their suffering, consider their feelings, and be involved in their day-to-day life (without being controlling).

The concept of timelessness

In a stable and happy romantic relationship, the concept of timelessness means that the past doesn’t matter and the future doesn’t make the partners anxious. Those who are capable of building a relationship based on true love aren’t held hostage by their past mistakes or previous relationships. They simply make sure to live in the present, tackling every new day with wisdom and courage.

They consider their partner the cardinal point in their lives and the focus of all their excitement, efforts, hopes, and commitment. Whatever happened the day before doesn’t matter. Worries about what the future will bring and what might happen later on don’t matter either. There’s no fear, just the conviction that they’re wanted, cared for, and loved.

Synergy consists of uniting in a single project and a shared ideal. It means investing hopes, commitment, and willpower in the pursuit of different simultaneous goals.

Couples that have synergy grow together, in every aspect of their lives. This is because they’re more than the sum of their individual parts. Together, they create a solid, reliable whole. They catch each other every time they fall, moving forward as one and always feeling safe and loved.

In conclusion, there’s no doubt that true love exists. But knowing that it’s out there isn’t always enough to keep it from slipping through your fingers. Be that as it may, it’s important to allow yourself to experience true love. When you do find it, make sure to do everything you can to make it last!

8 Things You Should Know About True Love
True love is something that goes beyond loving coincidences. Sincere and true loving is intensely falling in love with the differences. Read more »
Link copied!
Interesting Articles
Romantic Relationships
Commitment in Relationships