A Toxic Relationship Between Parents Has Consequences for their Children 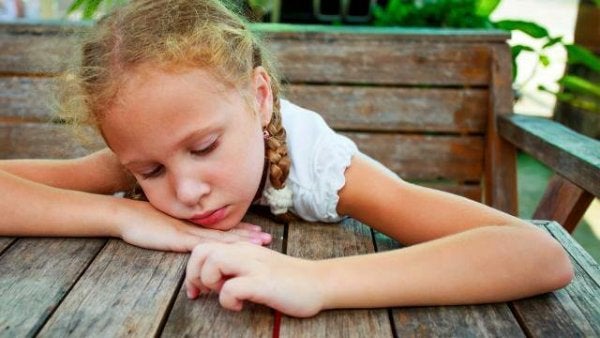 Anyone who psychologically abuses their partner, anyone who is taking advantage of, looking down on, humiliating, and destroying them and their self-esteem is committing indirect abuse. Indirect, but still awful for their children. Because constantly witnessing a toxic relationship makes these children the primary victims, the sad keepers of an emotional legacy marked by sometimes irreversible consequences.

According to the the World Health Organization (WHO) and the World Economic Forum (WEF), mental illness is the number one issue worldwide keeping people from work.

You may not have known that a good number of them have their origins in toxic or abusive relationships and the psychological mark they leave on a person. Indicators like post-traumatic stress disorder, depression, anxiety disorders, chronic pain, asthma, and even diabetes are silent but persistent signs of this type of dysfunctional relationship.

“I cannot think of any need in childhood stronger than the need for a father’s protection.“

Social and health institutions point out the need to “train” the victims of this kind of physical or psychological domestic abuse, and not stigmatize them. When we say “train” we’re talking about providing these people, men or women, with adequate resources and confrontation strategies so they can psychologically and emotionally see the value in themselves again, and then get back to their normal lives.

Now, something we often ignore, forget, or overlook is the children. Children who have witnessed these harmful dynamics, these completely toxic environments, from a very early age.
These children have silently internalized each particle. They’ve internalized each gesture made, word spoken, and tear shed in their impressionable, innocent minds. All of this often done while knowing perfectly well the impact it might have on their lives in the days to come.

Because we can’t forget that the cycle of violence is like a snake that eats its own tail. The same things are repeated over and over again, the same dynamics. Maybe these children who are witnesses to a toxic relationship today will become new victims or abusers tomorrow.

Witnessing a Toxic Relationship Turns Us into Victims too

“No, I’ve never lifted a finger against my children or my partner.” Unfortunately this is a very common reaction among abusers or perpetrators of that psychological abuse that leaves no marks, no bruises to serve as evidence of the beatings, the violation, the harm done in the intimacy of the home.

But, the fact that there’s no beating or any visible bruise actually makes the situation even more complicated. In these cases, the victims have a hard time seeing it as abuse. They tend to blame themselves.

And that blame or responsibility doesn’t just grow within the victim. It also grows in the child. As the ever-present witness, the child also usually experiences the same feeling. Because the child is just one more passenger on this train full of pain, on this track taking everyone to the same place.

We shouldn’t forget that as Piaget explained in his theory about children’s cognitive development, children from 2 to 7 have a self-centered focus where the world revolves around them. Because of this, the child will feel like their father or mother’s pain, along with all of the yelling or fighting, are happening because of something he did.

As a result, and it’s important we keep this at the front of our minds, at the core of any toxic relationship where there are children, they are victims too. It doesn’t matter whether they’re behind a door and don’t see anything, or whether they still don’t know how to walk, read, ride a bike, or name the constellations that appear in their window each night.

Children listen and feel, they interpret the world in their own way, and as a result, few things can be more devastating for their childhood than growing up in an environment with such a neurotic, destructive emotional backdrop.

Occasionally, both members of the relationship contribute to the toxic relationship. There are people who are incapable of constructing a stable psychological and emotional environment. They are characterized by that back-and-forth where affection and aggression, closeness and cruelty, create a highly dysfunctional situation for them and especially for any children involved.

“One of the luckiest things that can happen to you in life is, I think, to have a happy childhood.”

-Agatha Christie-
Abusive relationships come in many shapes and sizes. They exist in all socioeconomic classes. But the true victims of these emotional labyrinths are children. Because building one’s own identity in a context marked by abuse is often how the cycle of violence begins. We shouldn’t forget that people tend to repeat the psychological and behavioral patterns that they’re used to.

And so, far from surviving our parents’ toxic relationship, all of the above means that we (might) become new victims or perpetrators ourselves because we’ve internalized that same emotional language. In order to counteract this effect and end the cycle of abuse, we need the right tools. Children who have witnessed these dynamics need help, probably therapy. The parents do too.

Because if there’s something every child deserves it’s the chance to live in a non-violent environment. They deserve to be taught how to live well. They should be raised with consistency and respect. And most of all, they deserve a beautiful relationship with parents who know how to be affectionate, who are capable of love.

Children with Emotionally Immature Parents
Having emotionally immature parents leaves deep scars on children. Many children end up taking on adult responsibilities and they grow up too quickly. Read more »
Link copied!
Interesting Articles
Social Psychology
Identity Fusion: Relationship Between the Personal Self and the Social Self

Psychology
The Difference Between Fantasy and Desire

Millions of thoughts pass through our minds every day, but we only select those we consider to be the most relevant.…

Psychology
What Makes Some People More Resilient than Others

Emotionally resilient people know how to handle tension more efficiently, and they recover more quickly from any challenges and crisis…

Psychology
The Role of Bias in Psychological Distress

What does bias mean? It's the brain's tendency to emphasize and process certain types of information over others. It can be difficult…