The Various Phases of Culture Shock

Immigration is increasingly common in the current globalized world. However, overcoming culture shock is a challenge people often complete in different phases. Continue reading to find out more about it! 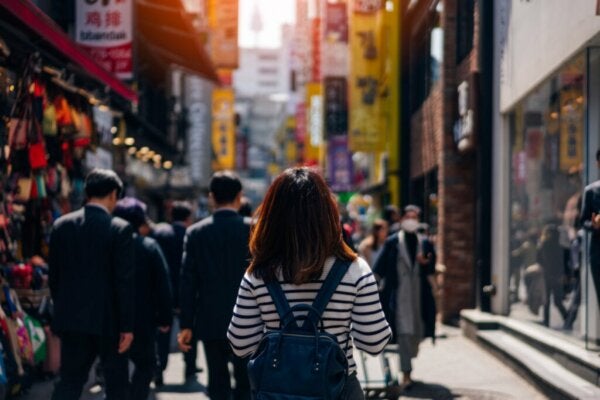 Migration and human exchange between countries are quite common in this increasingly globalized world. There are many reasons why individuals move away from their place of origin. However, even though most people are aware of the challenge of this decision, they don’t always know the culture shock phases a person experiences during the first years.

The need to adjust to a new culture, a new language, and a different lifestyle produces a real emotional impact. This is what culture shock is all about. In other words, it’s an experience in which emotions such as fear, sadness, euphoria, confusion, and uncertainty sort of rule.

However, it isn’t something static and continuous. A migrant will go through different stages, with their own characteristics, until they manage to adapt to the new environment. This process can last several years.

The phases of culture shock

Various authors studied the impact of a new culture on those who relocate from one country to another. In this regard, Lysgaard’s (1955) “U-curve” theory, states that three stages in the process of cultural adjustment stand out. At first, a person feels euphoria or happiness, then faces cognitive dissonance and imbalance, and finally stabilizes.

However, it was the subsequent theory of Gullahorn and Gullahorn (1963) that gained more impact. According to this theory, there are five phases of culture shock and they’re arranged as a “W”. Thus, these cognitive and emotional ups and downs are how a migrant adapts to their new place of residence.

The “W” curve and the five phases of culture shock

Emotion, happiness, and euphoria stand out in this initial stage. The host country is fascinating, stimulating, and novel. Also, they tend to perceive the differences regarding their own culture as positive and are motivated to learn and cooperate. In addition, they still feel close to their identity and past relationships.

This happens when the novelty wears out and the new reality becomes irritating, cold, and strange. The migrant doesn’t understand the values and way of life of the new destination and doesn’t share them. They begin to think they were better off in their native country.

There are feelings of hostility, anxiety, frustration, and sadness, and also somatic symptoms. The social support network they used to have (family and friends) now seems really far away and inaccessible.

During the adjustment stage, positive and pleasant emotions re-emerge. The new culture and its ways are now familiar and understandable. The immigrant has reached an adequate level of comfort and loneliness is no longer so pronounced. Their perspective is now more objective and practical and they’re ready to enjoy their new routine.

This phase usually occurs after a visit or trip to the native country. Things have changed back home and they no longer feel like they belong there. Thus, it affects their sense of belonging. They feel trapped between two worlds and don’t think they belong to one or the other. However, there’s a longing for a past that no longer exists.

Moreover, they’ve already established a routine in the host country. There’s no longer novelty or stimulation and, at this point, they stop and think about how much they miss their old life. The feeling of isolation and loneliness prevails.

Finally, the immigrant becomes familiar with the culture, ways, and values of the new country. They finally adapt to living and working in a new country without feeling strange or frustrated. They’re comfortable and feel at home.

It may take several years to go through the different phases of this cultural adjustment process. In addition, it’s important to emphasize that this process isn’t linear. The phases may alternate and repeat several times before a person finally adapts.

Knowing about the existence of these phases can help a migrant understand and normalize the emotions they’re experiencing. In this regard, the feeling of uncertainty decreases. This is because they finally know what to expect. Hopefully, every migrant succeeds in completing this process.

Sex Isn’t Natural, It’s Cultural
How many times do we distinguish between "natural" and "unnatural sex?" We base these definitions on prejudices that have been following us for years. In Read more »
Link copied!
Interesting Articles
Social Psychology
Learn to Resolve the 7 Most Common Types of Conflicts