Sons of Anarchy and a Culture of Violence 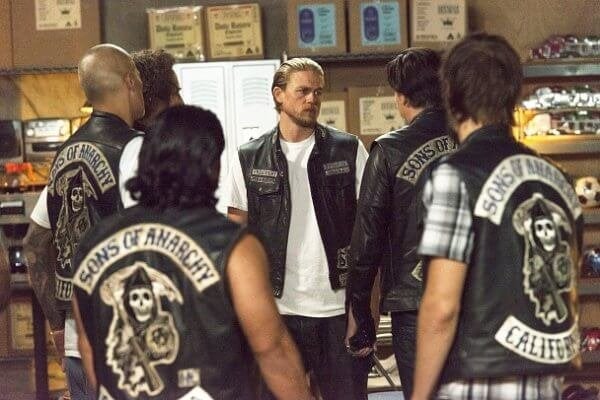 Sons of Anarchy is an American television series that tells the story of the Samcro biker group. They live in Charming, a small town in northern California that they’ve taken over. In exchange for carrying out their illicit activities, they offer protection and tranquility to the people who live there. They can have a life away from the criminality around them because of the rivalries between other biker gangs. It manifests in a kind of social contract between the club and the inhabitants of Charming.

Samcro deals with IRA weapons, an Irish terrorist group. The motor club has maintained ties with the IRA for several years. Although initially Samcro was a legal help group and offered leisure time to spend with friends, it slowly became a criminal group. Samcro unveils its history throughout the series, helping us to understand Samcro’s founding values.

The first MCs were created after the end of World War II as American troops began to arrive in the United States. The comrade’s shared experiences between different army divisions and their companionship during battle formed unique experiences in their life. However, when the war ends all of this disappears. Many of them missed their combat life, especially because their daily lives have become unbearable. Members of the of the Motor Club  don’t consider themselves to be fit for civilian world. They feel marginalized. They’ve seen things that nobody else has experienced and have formed close bonds with each other.

However, these men longed for and at the same time rejected their new places in society. They formed the MC to relive their moments in the war. Motorcycles were a means of transportation that many purchased because of their low cost. Therefore, because many of them had motorcycles they began to spend more time together. Anyone who has been companions in arms and blood is invited to take trip, walks, and partake in other MC plans.

After riots in the town of Hollister in the 50’s, some of these riders separate from traditional biker life and formed the famous 1%. The American Biker Association (AMA) said that 99% of bikers complied with the rulers. That left 1% of bikers who didn’t agree with the imposed social norms. They became the Outlaws.

The culture of violence in Sons of Anarchy

Violence seems to be intrinsic to society itself. It seems to be a social phenomenon, used by a group to impose its ideals on other groups. violence, within a cultural context, refers to a set of values and norms based in violence.

In this sense, violence is understood as a means to solve problems, perpetuating behaviors that feed back such behavior. Due to this, the degree of violence only increases. In the series it’s easy to see that, in order to maintain control, each time it’s necessary to use more aggressiveness.

Why? Because those behaviors, previously “not so serious,” received a disproportionately violent response. That causes a greater repression in the other party because they’re repressing an even more violent response.

Likewise, violence is a manifestation of respect or imposition of authority. In a hierarchical system, the honor of the individual and the club is above all. The president, leader of the group, must not only guide the club in the right direction, but also guide the club in the right social direction. They must maintain club cohesion and ensure that the rules that support it are respected.

The importance of family

The Motor Club is founded on family values. They’re not simply friends or comrades, they’re brothers. As such, they participate in the socialization of their children who are born in a predisposing environment to follow in the footsteps of their parents.

The family is responsible for educating the Sons of Anarchy and reinforcing their ideals. Children don’t go to school because they’re “not part” of that society. The values or rules by which they’re governed are different, creating unique concepts and ideas adapted to their reality transferred from generation to generation. This limitation of learning, without allowing a socialization beyond the “family” limits prevents new generations from having a broader vision.

The role of women

Women form a group apart from the MC itself. Although they’re within the club, they don’t move away from the traditional role of women in society throughout history: wives and mother. In this way, Sons of Anarchy reflects that violence that has always existed towards the female sex.

A woman must become the stable girlfriend or wife of a club member to become a part of SAMCRO. Other than that, she’s simply there to satisfy men’s immediate desires. The woman is continually at the disposal to men.

The woman is the one that harmonizes the group. She has many functions to fulfill in this role. SAMCRO places a great deal of importance on the woman’s relationship to the club member. Because within that family concept, they consider that if you can’t give everything for the club then you don’t deserve to be there.

In conclusion, Sons of Anarchy tries to show the lifestyle and values that unite many “motorcycle clubs”. The feeling of marginalization after the war led them to move away from society and denying it. They made their bikes their life and what defines them.

“Friends, the family that we choose.”

Emotional Blackmail and How it Harms our Kids
Many parents, unfortunately, resort to emotional blackmail with their children. Read on to find out how this can harm them and what the alternatives are. Read more »
Link copied!
Interesting Articles
Culture
Being Mentally Overweight: our Thoughts and their Consequences

If you feel that your body is constantly tired, stiff or sore you may be suffering from being overweight. But…

Culture
What Do You Know About Altered States of Consciousness?

After reading the title, you might be wondering what altered states of consciousness even are. Have you ever been curious…