The Types of Love According to John Allan Lee

John Allan Lee's color wheel theory proposes that love, like colors, have three "primary" elements (passion, companionship, and respect). These three can be mixed together to create every other element. 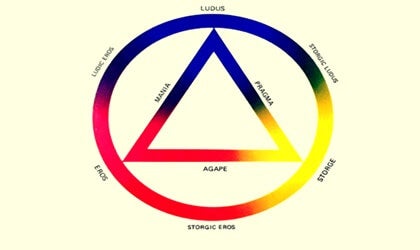 John Allan Lee argued that there were different kinds of love. He used a color analogy to talk about them. He believed that three primary emotions, when mixed together, make up all other emotions. This approach, which was proposed in the 70s, is an important reminder that, to be happy, everyone needs respect, companionship, and passion.

Before we go into detail, let’s talk a little bit about the author of this theory. While his name is no longer famous, in his day, he excelled at combining social activism with academic research. He was a respected sociologist at the University of Toronto and spent his life trying to understand the psychology of love and sexuality.

John Allan Lee was a union member, Amnesty International activist, and human rights defender for the LGBTQ community. He was also one of the most active proponents of the right to die (assisted suicide). In fact, he chose that end for himself when the moment came. He led this world in peace after writing down his memories and realizing that he had fulfilled his purpose, which was to fight for the importance of love and mutual respect.

The types of love according to John Allan Lee

John Allan Lee wrote about his theory in a book called The Colors of Love. He also published the results of a study that he conducted over the course of several years at the University of Toronto, Canada. In his book, he argues that authentic love, the most enriching kind of love, is blue, red, and yellow.

When you mix these three colors together, you get new and fascinating shades of love. However, in terms of emotions, nothing is more important than this primary color base. Lee’s theory proposed these dimensions of love:

Eros is romantic love. In this case, it’s an attachment that’s heavily idealized and promoted by our culture. With romantic love, passion and emotional devotion lead to often unhealthy attachments. The attraction is intense and immediate. Physical attraction is especially important, as is absolute devotion and possession.

The erotikon, which has its roots in ancient Greece, gives shape to this love based exclusively on desire and sex. According to John Allan Lee’s theory, this typology gets attention for a simple reason. Sexual encounters, without any kind of emotional component, don’t always make for a stable or satisfying relationship.

These kinds of sexual games based on unexpected physical attraction can be satisfying for both parties over the short term. In the long term, however, they can lead to disappointment or they simply end when another sexual partner comes along.

People who have a Ludus style of love see it as a game. So, the end goal is to win the person over and gain some benefits (emotional, sexual, diversion), etc. To achieve their goals, these people won’t hesitate to seduce, deceive, and manipulate. They don’t like to commit, and their relationships are characterized by emotional distance.

John Allan Lee believed that these individuals are focused only on getting short-term benefits.

Logic is the dominating force in this kind of love. Think of Spock, on “Star Trek,” who relegated emotions to a back burner and focused on the usefulness of emotional relationships. People with this style of love tend to ask themselves if their family and friends will like their potential partners. They also wonder about the financial and emotional stability that a potential partner will provide.

Dependent people who only focus on satisfying their needs are good examples of the style of obsessive love. Their emotions swing wildly from one extreme to the next. As a result, they might seem cold and distant one minute, and passionate and loving the next. They’re possessive, controlling, and can be abusive.

John Allan Lee believed that this was the type of love that makes people the happiest. This kind of love knows how to give and receive. People who love this way are also focused on their partner’s needs. They offer their affection unconditionally, they commit to caring for the other, and they care for themselves. They work on a healthy attachment based on satisfaction and harmony.

To conclude, it’s worth mentioning that these six subtypes appear to different degrees in every relationship. Whether you want it or not, there’s always some aspects of eros, erotikon, and agape in the daily work of maintaining a relationship with another person. The important thing is to be aware of what type is most present in you or in your partner. If it’s a positive archetype, you can work to keep it that way. If it’s a negative style, try to work on changing it.

Hating the Person You Love: Is it Possible?
Hate and love are two feelings that, at extremes in intensity, have everything to do with each other. This makes hating the person you love quite possible. Read more »
Link copied!
Interesting Articles
Theories
Motivate Yourself with The Goldilocks Principle