The Sea Inside: When Life is an Obligation 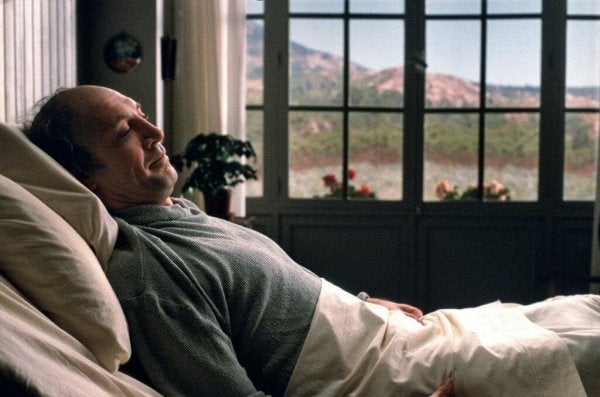 The Sea Inside is a Spanish film that won the 2004 Best Foreign Film Award. Directed by Alejandro Amenábar and starring Javier Bardem, it’s based on the true story of Ramón Sampedro, a quadriplegic who decides to end his life.

The story of Ramón Sampedro is controversial because it tackles euthanasia, which is illegal in Spain. Twenty years after his death, assisted suicide is still illegal. This is why this story is still relevant today.

The Sea Inside sparked the reopening of this partially solved case. The woman who helped him die, Ramona Maneiro, was freed for lack of evidence. However, she later admitted her participation in the crime. The first movie inspired by this story, Condenado a vivir (Condemned to Live), was released in the year 2001, but wasn’t as successful. The Sea Inside became the most acclaimed film, having won the Oscar’s Best Foreign Language Film award.

Despite the film’s success, it received negative criticism from the media and some tetraplegic groups, who criticized Sampedro’s attitude towards life. The film, however, simply tackles a real issue: one’s right to a dignified death and freedom of choice.

In addition to his media and film legacy, the story of Ramón Sampedro became the inspiration of two written works: Cartas desde el infierno (Letters from Hell) and Cuando yo caiga (When I Fall). They were published posthumously. All this made Ramón a well-known figure in the eyes of the Spanish people.

“They say that, sometimes, when some people feel that they’re going to die, all events and things that always influenced them runs through their heads like a movie.”

The Sea Inside: To live or to die?

Ramón Sampedro was born in Galicia, Spain in 1943. He was a seaman who had an accident when he was 25 years old. This accident left him bedridden for the rest of his life. Knowing that he could never move again and that his life would always depend on the care of other people, he decided to die in a dignified way. Thus, he became the first Spanish person to petition for assisted suicide. His case became controversial in both the media and the courts.

Seeing that the law wouldn’t help him, he decided to secretly end his life with the help of his friend, Ramona Maneiro, due to the fact that his condition as a quadriplegic made it difficult for him to do it alone.

He recorded a video while drinking a glass of water with potassium cyanide and explaining why he deserves to die with dignity and how he decided to do it. He also clarified that no one should be blamed because he planned everything and that the others merely helped him.

In the film, we see some contending views on Ramón’s decision. On one hand, the members of his family who don’t want him to die. His brother says that it’s best for Ramón to continue living. On the other hand, lawyer Julia and neighbor Rosa who later on help him die.

Rosa’s character is important. Partly inspired by Ramona Maneiro, she helped Ramón. After seeing him on television, she decides to meet him to convince him to regain his desire to live. However, she ends up falling in love with him and finally understands and accepts Ramón’s decision.

In the meantime, Julia took the case to court. Unlike Rosa, she understood Ramón from the start, since she’s been suffering from a degenerative disease herself which makes her consider committing suicide.

Why did Ramón Sampedro want to die? Why did he say that his life was not worth living? Many groups support the idea that a quadriplegic person can be happy and may live with dignity.

One of the most critical moments in his life was when a quadriplegic priest came to see him, and the two began talking about ethical, moral, and religious issues. The priest insists that life belongs to God and that living is not just being able to run or move your arms. You can live in a wheelchair in the most dignified way possible. Sampedro did not mean that he rejected or did not understand this position. He simply doesn’t want to live anymore. He has stopped fighting or accepting the wheelchair and prefers to die peacefully.

All this can make us think that, in this situation, there’s no correct or true position. Choosing to live or to die are personal or individual decisions in which no one must intervene. Surely, it seems crazy that a person forces another to die, but how about forcing a person to live?

The Sea Inside: The controversy over euthanasia

In reality, euthanasia is a sensitive issue because it’s not only a personal decision but because other cultural and religious factors intervene. Accepting death is never easy for anyone, but accepting that someone is choosing to die is even more complicated.

For Ramón Sampedro, life was an obligation. His disability was hell and instead of regaining his desire to live, he fought to die. To die with dignity without anyone to blame for his death. In The Sea Inside, we witness a legal battle that continues to this day.

In some countries like Belgium, the Netherlands, and some states in the United States, euthanasia is legal and is supported by the health care system as more and more people are choosing to die this way. It’s not that euthanasia is gaining popularity, it’s always been there. The thing is, it only remained behind the shadows.

The controversy of the case, the documentary film of his death, and the release of the movie The Sea Inside revealed that there’s an open debate in Spain regarding euthanasia. However, none of this matters because, when a person is convinced of what they want, they’ll do everything possible to make it a reality.

Normally, family members are the most affected and refuse to accept that their loved one wishes to die. In these cases, understanding, love, and even psychological support may be the key in their path to acceptance.

We can’t judge anyone for their decisions or for their actions, nor can we force them to change their minds. What’s right? Probably nothing is. We just have to accept the decision. The Sea Inside shows us that, whether we agree with it or not, in the end, love and understanding are stronger than any personal opinion.

“A life without freedom is not a life at all.”

Saying Goodbye to Someone Who’s Going to Pass On
When someone you love is going to die, it's hard to find the words to say goodbye. In the midst of all the anguish, sometimes they end up coming like a Read more »
Link copied!
Interesting Articles
Cinema, Television, and Psychology
Suspiria: Two Versions of the Same Script